News
Learning Curve
MinnPost’s education reporting is made possible by a grant from the Bush Foundation.
April 15, 2011

“807,” as the Minneapolis Public Schools HQ is derisively referred to, isn’t so much an office building as a collection of ad hoc structures all located at 807 Broadway NE. There is no front door, just a back one that opens onto some other doors and, because different wings were built at different times, half-flights of stairs. The floors they lead to tilt visibly, and there’s an alarming shortage of restrooms.

The sprawling warren could easily serve as a visual metaphor for the district’s administrative structure, as described by a consultant who recently evaluated MPS’ culture.

“MPS has its share of silos,” former Illinois state Education Superintendent Robert Schiller concluded after a January “deep dive” into the school system’s organizational structure. “There is a sense that the district is comprised of 72 silos (the schools) and the multiple silos at central office.”

Multiple issues
As a result, morale is low, senior leaders are not pulling in the same direction and Superintendent Bernadeia Johnson is spread too thin, he reported. “In MPS, due to turnover in the past 10 years of its superintendents, the culture has not necessarily reflected the influence of the superintendent but more so has reflected the attitude by its employees that ‘this too shall pass,’ ” Schiller reported. 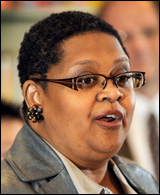 “There was expressed an expectation that Superintendent Johnson assure that her cabinet members are all working for the same purposes and in a coordinated fashion,” he added.

As MPS’ chief academic officer, Johnson fulfilled essentially the same function for her predecessor, Bill Green. The job has been vacant since his departure, with Johnson continuing to oversee her academic vision while assuming responsibility for operations, external relations and the care and feeding of an eight-member board with five brand-new members.

“Building a strong and loyal team and conditioning the team to function at a high level consistent with the new superintendent’s style will require clarification of roles, planning and training for staff for the responsibilities of their roles and execution,” Schiller’s report noted.

In an interview, Johnson was careful to say she would hire someone outside the district as deputy superintendent.

While most of the broad criticisms aired in the report predate the superintendent by years, the audit appears to be the first time anyone has gone through 807 systematically, job by job, to examine how well individual managers and leaders are contributing to the district’s strategic plan.

The 87-page report made specific recommendations about staffing and accountability in numerous MPS departments, but the bottom line in many cases was that she needs to make sure her senior leaders are implementing her vision for change. The deputy could take over day-to-day supervision of the associate superintendents and some other key staff so Johnson could be more involved with finance and human resources, for example.

Staff accountability plan questioned
The report also decried that lack of specific accountability measures for staff and mechanisms for deciding whether performance goals had been met. It included materials from other large districts that have gone through the painful process of creating system-wide evaluation processes successfully.

The consultant was most critical of the Department of Human Resources, the Office of Family Engagement and the uses of the three existing associate superintendents. He called for an evaluation of human resources’ “execution of services,” suggested re-evaluating the department head’s role as chief labor contract negotiator and noted that nothing had been done to implement reforms suggested two years ago regarding teacher recruitment and evaluation.

Schiller expressed concerns that the Office of Family Engagement, which oversees such crucial tasks as community outreach and student placement, is disorganized and staff have conflicting ideas about their purpose.

“Board members expressed deep concern and keen interest in the focus and effectiveness in community/family engagement,” he said. “It would behoove the superintendent to convene a working group of staff and stakeholders and charge them with defining the mission and focus for this area.”

The report had the most to say about the three current associate superintendents, Johnson’s eyes and ears in the schools. Because she is stretched too thin, they do not get enough guidance from her, it noted. And because they are all relatively new and stretched too thin themselves, they are not as effective as they should be.

“A superintendent needs to have as her key educational assistant someone who is respected, who has high credibility and works tirelessly to implement the superintendent’s educational vision,” Schiller opined. “This individual needs to be seen as very effective as an instructional leader and as a communicator.”

For her part, Johnson said she knew portions of the report would be difficult for her staff to hear, but she has become convinced that true transformation can’t happen unless MPS’ culture shifts.

“This is not about putting down people across the system,” she said. “We have to have a strategy for moving forward.”

Board member Alberto Monserrate has read the report and spoken to Schiller, whom he called impressive. “There are some tough things that are being said there,” he conceded. “But we’ve got decades of a culture that needs to change.”

He praised Johnson for taking the initiative: “What I saw was refreshing. I saw a leader who was inviting feedback and not getting defensive at hearing it.”

Johnson said she will consider the report’s other recommendations carefully, and plans to think about them not just from her position as superintendent but to remember how powerless she sometimes felt when she was an MPS parent.

“We are at a crossroads in this organization, and we need to change,” she concluded. “Incremental gains are not sufficient.”