News
Learning Curve
MinnPost’s education reporting is made possible by a grant from the Bush Foundation.
April 13, 2011 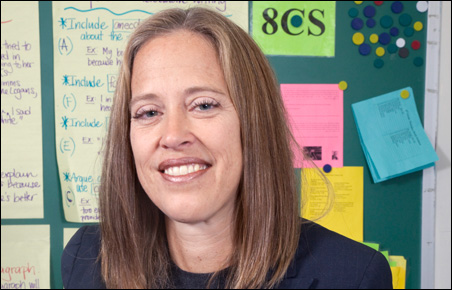 Courtesy of Teach for America
Curing urban education’s ills will require a complex combination of strategies, Wendy Kopp writes in a new book, “A Chance to Make History.”

Over the last two years, as lawmakers debated and rejected, and then debated and approved alternative means of licensing teachers, Teach for America became a household name in Minnesota — although rarely one voiced without some kind of ideological overlay.

Before teachers became public enemy No. 2, right behind their union stewards, TFA was known as a nonprofit that trains recent college grads, drops them into struggling classrooms and sometimes watches the seemingly impossible take place. It may just have single-handedly made teaching cool: Recent cohorts have drawn the top of the top university graduating classes.

With teachers now in everybody’s crosshairs, the TFA has been dogged by the kind of black-and-white descriptors that seem to dominate headlines about education reform. Depending on who’s doing the talking, its teaching corps either absorbs gobs of money while failing to deliver systematically or should be schooling their elders in gap-closing instructional methods.

It might surprise you, then, to learn that TFA Chief Executive Officer and founder Wendy Kopp has little use for either of these one-dimensional portrayals. Curing urban education’s ills will require a much more complex combination of strategies, she writes in a new book, “A Chance to Make History.”

On Thursday, Twin Cities residents will get two chances to hear Kopp, first during a live webcast from Twin Cities Public Television’s downtown St. Paul studios and then in person at the University of Minnesota Bookstore at Coffman Memorial Union. [In the interest of full disclosure: TFA’s president, Matthew Kramer, is the son of MinnPost editor and CEO Joel Kramer.]

Kopp’s TPT appearance is part of the Minnesota Meeting, an ongoing Minneapolis Foundation public-policy forum that has sponsored a number of education-related events. It will be streamed from 5-6 p.m. The reading and book signing across town begin at 7:30.

Earlier this week MinnPost caught up with Kopp to get a taste of what audiences can expect.

MinnPost: In a chapter of your book entitled “Silver Bullets and Silver Scapegoat” you try to stake out some middle ground in the din about “good” and “bad” teachers.

Wendy Kopp: My new book takes its title from the story of one of our teachers, who completed her two-year commitment with us this past year. Her name is Megan Brousseau and she was teaching biology to ninth-graders in the south Bronx. She said to her four classes of 112 students on the first day of school, “You have a chance to make history.”

These are kids who are growing up below the poverty line. Almost all of them were learning English. Twenty percent of them were reading more than three years below grade level. They have not had the level of exposure to science that you would typically see in ninth-graders.

Megan called on them to take and pass the New York State Regents exam in science and biology. She chose that goal because she thought that if they could do that they could prove to themselves and others that they were college material. And she thought that that would influence their trajectories.

I can’t tell you the extraordinary investment of energy and dedication she and her students put in to ultimately meet that goal. She convinced her kids to work harder than they had ever worked. She essentially rewrote the curriculum to meet the kids where they were and to maximize every moment she had with them.

Megan’s experience tells us a lot. On the one hand, she shows us that it is absolutely possible to provide kids who face the extra challenges of poverty with an education that sets them up to excel. She shows us a lot about the ultimately solvability of this problem. She shows us there’s nothing elusive about solving this problem.

But at the same time there’s something really daunting in her story. There are only so many Megans in the world. And that’s what you learn when you spend time with her and others like her who are having this extraordinary success with their kids.

Getting to know her and others like her also shows how hard it is to get transformational results outside of schools that provide the culture and the supports to make it much easier to teach successfully. I don’t think there is anyone who thinks that the path to ensuring educational opportunity for all is to ensure that we have hundreds of thousands of Megans. There is simply no path to that.

What’s encouraging is to see — and this certainly wasn’t the case 20 years ago when I got into this work — that today there are hundreds of high-performing schools in urban and rural areas that are making it not easy by any stretch, but easier and more sustainable for talented, committed teachers — who are not superheros — to obtain the kinds of results we saw in Megan’s class.

Seeing what happens in these very high-performing schools has led me to see this as an organization problem rather than a teacher problem. Ultimately you realize these schools operate the way successful organizations do: Their leaders have embraced a very ambitious mandate, put their kids on a different trajectory and they are going about realizing their goals with the same energy and discipline that leaders use to meet any ambitious goals.

And that starts with using lots of energy to attract and retain lots of great teachers and staff and building a powerful culture and managing successfully and building the structure that makes it possible for teachers to meet the end goals.

So now when I hear about poor-performing teachers I wonder what are those schools doing to make sure those teachers get the kind of training and support they need to be effective, first of all, and certainly then to manage the situation. Certainly as in every line of work some people then turn out not to be cut out for it and you need systems to manage that in a humane and supportive way.

I think we’re spending far too much time as a country right now blaming teachers and far too little time assuming responsibility for their success as school leaders and system leaders.

MP: How would you like to reframe the discussion?

WK: What we need to do is center our policymaking and our philanthropy and our discussion in these lessons that can be learned from these high-performing schools in urban and rural areas. We have an enormous opportunity today that we didn’t have 20 years ago, in that today we know how to create what I would call transformational schools that do change the trajectory.

There’s a growing number of people who understand what’s happening in the schools, but certainly not enough. If our policymakers and our teacher educators and others would truly center themselves on the lessons of these schools we would start making decisions differently and the tenor of the discussion would change — a lot.

It is fascinating to me that in many, many rooms I go into people are blaming the unions for foreclosing progress. I think that unions and union contracts need to change, but when I think about the list of culprits in this picture, well, we almost need to move to a blameless world because we are all caught up in one big massive systemic issue. But the fact is that in a world with very low unionization and weak union protections teacher dismissal rates are 1 percent.

If I could tell you the number of Teach for America corps members who tell me they never are visited by anyone in their classrooms, does it really make sense that we’re blaming the unions for this? You know, everyone’s at fault and everyone’s really not to blame at some level. We haven’t known what works so we blame everyone from our teachers to our building leaders to our administrators. We simply did not grow up in a world that was characterized by the rigor and the discipline that you would find in these high-performing schools.

Wendy Kopp: For school success ‘we know what’s possible, we all need to change’