News
Learning Curve
MinnPost's education reporting is made possible by a grant from the Bush Foundation.
May 31, 2011 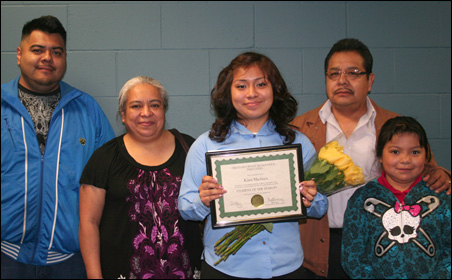 Early Thursday morning, as a line of buses disgorged students outside, Kiara Machuca’s family sneaked behind the jumbo screen at the front of Cristo Rey Jesuit High School’s auditorium. They stood, neatly dressed and looking a little intimidated, through a prayer for tornado victims, reminders about a blood drive, deadlines for tests and for signing up for the school canoe trip.

Housekeeping dispensed with, Cristo Rey’s faculty got on with the first of the two main agenda items for the all-school assembly, the naming of the student of the month. After several rounds of applause for students earning honorable mentions, a recorded voice began extolling the still-unnamed winner’s many accomplishments.

After a pause, a photo appeared on the screen. Kiara jumped out of her seat on the auditorium’s left side and raced to the stage as her mother and father, Alicia and Esteban Machuca, led her brother and niece from their hiding place.

“Hi,” Kiara said, beaming as she crossed the stage to greet them. “I’m finally up here!”

Showing the effortless poise of a practiced public speaker, the senior told a funny story about her teachers tricking her into showing up with her hair nicely done, introduced her loved ones and repeated her delight at finally being scholar of the month.

No small feat
At Cristo Rey, this is no small feat. In addition to the academic accomplishment one would expect, it means perfect attendance and performing well at a paying job in the community. All 262 students work five days a month in positions the school helps them to secure with a host of Twin Cities employers.

Next week, Kiara and all 60 of her classmates will graduate from the 4-year-old private school, located just off Lake Street in South Minneapolis. The school’s first graduating class, virtually all are poor minorities.

Typically, barely half of students from similar backgrounds graduate from high school in Minnesota. Yet not only is every member of Cristo Rey’s first class graduating, 58 are headed for college and the other three have enlisted in the military.

Cristo Rey’s goal is for every student to graduate not just from high school but from college. So far, the other schools in the group have a 25-30 percent success rate.

Compare that to an overall graduation rate among all students who enter college of 40 percent. Within Cristo Rey’s demographic, just 10 percent leave with a degree.

The first Jesuit school in Minnesota, Cristo Rey tries to enroll kids who couldn’t otherwise afford a Catholic college-prep school. The idea behind the jobs isn’t so much to help the kids pay their tuition — which they do — as to teach poise and confidence and get them focused on the career possibilities open to those who finish college.

Next year, Cristo Rey will have 305 students. The goal is eventually to serve 400-450 and to provide each with support and mentorship all the way through college.

The school’s first, Kiara’s class presented the school’s administration with some challenges. Through meetings with community groups and presentations in schools throughout the area, Cristo Rey recruited an inaugural freshman class of 97.

Ten more were enrolled over the next four years. More than 40 dropped out, however.

Next year, 57 of the 65 students who enrolled as ninth-graders are expected to graduate. What changed?

“I’m not willing to say to 10 percent of our freshmen, ‘You I’m not going to worry about,’” said Myers. “We really focus on the students we can serve.”

When they apply, most students are scoring in the 25 percent to 75 percent range on standardized tests, with a significant majority on the lower end of the range. A few are as low as 5 percent and a very few have learning disabilities.

Many are new to the country and many come from families that haven’t been able to stay in one place for long.

Catching up academically won’t be the only thing on students’ schedules. In Cristo Rey’s Hire4Ed program, four students share a job. One takes Monday, another Tuesday, and so on. Each covers one Friday a month. To make up those hours, Cristo Rey’s school day and year are longer than most.

Emphasis on core subjects
Students are pushed hard in core subjects, and there are few electives. If families wonder why their kids aren’t getting, say tech ed or business, they are asked how they would feel if their son or daughter were instead to help maintain the Spanish-language portion of Best Buy’s website or negotiate trucking contracts with Somali drivers at a transportation company.

“We tell them, ‘Right now you have the skills to go to work and you can have fun doing it,’” said Myers.

The first Cristo Rey school was created in 1995 by then-Chicago Archbishop Joseph Cardinal Bernadine, who challenged the Jesuits to find a way to serve impoverished Latino immigrants. The first school was so successful that in 2001 a network was established. Today it boasts 24 schools nationwide.

Cristo Rey has a lot in common with many other so-called beat-the-odds schools. Most have a strong culture and a clearly articulated vision and take advantage of even the smallest, most symbolic opportunities to reinforce it.

For example, students must swipe their ID when they arrive in the morning. To get to the scanner, they have to first shake hands and make eye contact with staff.

Uniforms and Dale Carnegie skills
Tidy uniforms are a given, and everyone takes a Dale Carnegie class. Students who need help with job performance or who aren’t called back by an employer get tutoring in workplace decorum.

When a student slips, staff concentrate not on their infraction but on the end goal, said Myers: “Why are you here? What do you want to be when you are older?”

“We really try to [concentrate] on, ‘You made a mistake, now get back on track,’” he said.

After the assembly where Kiara’s award was passed out, Junior Dana Fernandez lead a tour for a group of corporate visitors who had come to watch another student, Andrea Narvaez-Zambrano, receive the Hire4Ed employee of the month award. 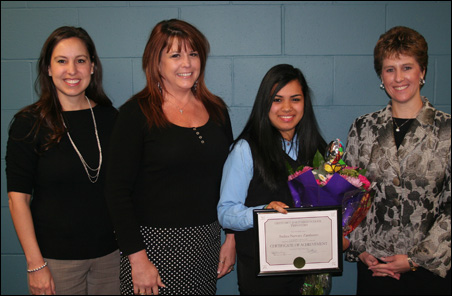 The three well-dressed women from WIPFLI, a CPA and business consulting firm, towered over Fernandez, who appeared wholly at ease describing the activities under way in each wing and fielding questions about her job at Lawson.

Prodded to look for networking opportunities
Because Cristo Rey’s kids lack the natural networking ties wealthier students take for granted, they are prodded to look for opportunities. One of Fernandez’s classmates parlayed his junior-year job into a stint caddying at the Minikahda Club, where he collected a stack of business cards he’s now busily working his way through.

Still, teachers have to work hard to keep kids’ eyes on the doors a college degree will open. Cristo Rey’s kids often come from families where the steady paycheck from even an entry-level job is so welcome and college so unknown that at first, staying in school for another four years doesn’t always seem like the obvious plan.

On June 10, Cristo Rey’s first graduation will begin with a Mass at which three more awards will be handed out. In addition to recognizing the students with the most outstanding academic and workplace records, staff will hand out a citizenship award to the best servant-leader.

Diplomas will be handed out the next day, Saturday, June 11, at 2 p.m. in the school’s gym. There may only be 60 grads, but 1,500 people are expected to attend. Not only is each student welcome to invite as many friends and family members as they wish, many of their corporate supervisors will be there.

Like everyone she’ll share the stage with, Kiara Machuca has a pretty good idea what will happen next. In the fall, she’s headed to Santa Clara University in California on a full scholarship.

In her junior year, Kiara worked for Ryan Companies. She did well on the job, according to her teachers, but was interested in the health-care industry and set her sights on working for Medtronic.

Using the job-hunting skills she’d learned at school, last summer she scored a position there on her own. Her supervisors were so impressed that they convinced her to apply to college in a city where she could keep working for the corporation.

While she’s in college, Kiara will continue to receive support from Cristo Rey. Because no one in her family has gone to a university, a teacher will step in. He or she will be in close contact, listening for signs that Kiara is finding ways to fit in and juggle her obligations.

In the end, Cristo Rey hopes she’ll be back, but in a wholly different role.