News
Learning Curve
MinnPost’s education reporting is made possible by a grant from the Bush Foundation.
May 26, 2011

U.S. Secretary of Education Arne Duncan yesterday announced plans to spend the lion’s share of a third round of Race to the Top education stimulus funding on early-childhood education. Duncan plans to use $500 million of the $700 million Congress appropriated last month to fund Early Learning Challenge grants to encourage states to create comprehensive, high-quality pre-K systems for disadvantaged kids.

Just a few weeks ago, Minnesota could easily have positioned itself to win one of the competitive grants. Yet by the end of the Legislature’s regular session Monday night the virtually revenue-free initiatives that would have put the state in the running had died quiet, ideologically motivated deaths.

The new stimulus dollars will go to states that create coordinated systems aimed at increasing the number of disadvantaged kids enrolled in high-quality early-ed programs. To be eligible, states must set clear standards and meaningful programs for pre-K teacher development.

At the start of the legislative session, Minnesota was poised to check every box on Duncan’s list.

Bipartisan consortium sought expansion of ratings
For starters, after five years of research and a successful pilot, a high-profile, bipartisan consortium of policymakers and business leaders asked the Legislature to expand its quality early-ed ratings system statewide.

The brainchild of the Minnesota Early Learning Foundation (MELF), the Parent Aware rating system would have identified high-quality early-ed programs, steered the fragile families that rely on public child-care subsidies toward them and rewarded providers that deliver top results.

Persuaded by research showing that every dollar the state invests in top-notch early childhood education returns $16 to the economy, MELF’s private-sector boosters put up $20 million to create ratings and study their impact.

Among the findings: Test scores rose and mobility virtually disappeared among children enrolled in St. Paul programs that participated in the pilot phase of “Parent Aware.”

Bill was revenue-neutral
Authored by Rep. Jenifer Loon, an Eden Prairie Republican, the bill to expand the ratings statewide was revenue-neutral, meaning its implementation would not cost a cent, and it enjoyed the backing of Gov. Mark Dayton, the Minnesota Chamber of Commerce and pretty much everyone on the political continuum between them. 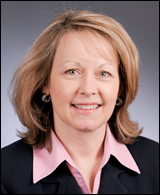 The bill died in a March dawn-hours vote at the hands of social conservatives who feared it would create a “nanny state” that would attempt to replace parents.

“We haven’t been focused on Race to the Top, and will leave those discussions to others,” he added. “But ratings and ratings-based scholarships are clearly the right thing to do for anyone who cares about getting more kids prepared for kindergarten.”

Second big initiative: consolidate programs
The other major initiative that would have put Minnesota squarely in the running was a proposal developed by pre-K policymakers to consolidate the state’s early ed-related programs under a new assistant commissioner of education.

In part because it would streamline a hodge-podge of programs now housed in four state agencies, the move could have cost virtually nothing.

The realignment was stripped from one of the two omnibus education bills Dayton vetoed Tuesday.

Indeed, if there was one bet that seemed bankable at the start of the session, it was that 2011 would be the year the Legislature gave pre-K a place at the policy table. With support from both parties and several policy-advocacy groups with high-profile business and civic leaders on their boards, it seemed like the one arena that might be immune from politics.

Watching the legislative agreement unravel was crushing, said Vallay Varro, executive director of one of the groups, MinnCAN.

“Fifty years of research demonstrate that students from high-quality pre-K programs score significantly higher in reading and math, are less likely to drop out of school, repeat grades or need special education, and are more likely to enroll in college,” she said after the ratings were stricken from one bill.

“We cannot continue to turn a blind eye towards quality early learning opportunities if we are serious about making sure every Minnesota child gets the kind of start they need to be successful in school and in life.”

A final, bitter irony: Minnesota won’t be eligible for any of the other $200 million in third-round RTTT funds because it did not make the list of finalists for the first round and failed to apply for a second round.

2010 adjournment without action on reforms
Embroiled in a bitter stalemate between then-Gov. Tim Pawlenty, Capitol DFLers and the state’s largest teachers union, last year’s Legislature adjourned without acting on reforms that were required under RTTT, such as a new teacher-evaluation system, tenure reform, creating alternate paths for teacher licensure and placing top teachers in struggling schools.

Alternative certification passed easily and early on in this year’s session, but the other items on that wish list are still AWOL. GOP legislative leaders grouped versions of many of the reforms that enjoyed bipartisan support at the session’s start with vouchers, dramatic aid shifts and cuts and other measures Dayton had vowed to veto.

In a statement released yesterday, the governor said he had directed Education Commissioner Brenda Cassellius to prepare a new RTTT application anyhow, seeking a pre-K grant. This time, he got the immediate support of Education Minnesota.

“I encourage the Legislature to think about the future of Minnesota’s children – as well as the millions of federal dollars that are at stake – as they consider their budget priorities and we work toward a compromise budget solution,” Dayton said.