News
Learning Curve
MinnPost’s education reporting is made possible by a grant from the Bush Foundation.
June 2, 2011 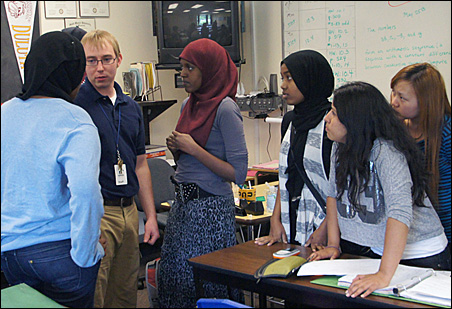 Courtesy of Jolene Goldade-Swanson
Anthony Padrnos, second from left, chats with students from his precalculus class.

On a recent Wednesday morning, the entire back row of Anthony Padrnos’ precalculus class at Hopkins High School seemed to be suffering from a bad case of spring fever. All boys, they were perpetually in motion as they talked — and towered — over their teacher. A couple balanced precariously on windowsills instead of at their desks.

At seven minutes after the hour, Padrnos poked at a handheld electronic slate and a YouTube video began unspooling on a big white tablet at the front of the room. Within seconds, all eyes were on the kid on the screen rapping about derivatives.

“Did you make this?” a girl in the front row asked, jiggling to the hip-hop.

A teacher for just four years, Padrnos did. As the song petered out, he pecked at the slate again and an equation appeared in its place: f(x) = 2x2 – 7x+3.

A couple of jokes about phones that were too old to text followed, but mostly the class settled down and got to work.

Looking something like a cross between an overhead projector and the world’s biggest iPad, the tablet, the electronic board and the various gizmos strewn around the room that were communicating with it constitute a system called the Promethean ActivBoard.

According to Padrnos’ master’s thesis, used effectively, technology helps students — particularly minorities — conquer math. There are several good systems, but the research Padrnos did while earning his M.A. at St. Mary’s University of Minnesota  suggests the Promethean is the most effective.

Teacher can see who needs help
One advantage of the clicker system is that the teacher can see from the data transmitted who needs help, but students who don’t know the answer don’t have to admit as much to the whole class — or fear they are the only one who doesn’t get it.

In fact, often students are surprised to see how well they are actually doing compared to their peers.

“Every kid can be involved, and this provides a lot of data about where students are,” said Padrnos. “With my geometry students I can see who is struggling and get to them one by one.”

There is a growing body of research on technology and math instruction that backs Padrnos.

A question of mastering the material
“Often students, especially low achievers, begin to believe that they lack ‘ability’ rather than to understand the intended message that they have not mastered the material,” a recent study on the use of graphing calculators to track gaps in student knowledge concluded.

Like the data collected by the Promethean, the graphing calculators allowed educators to identify which specific skills individual students were missing so they could “scaffold,” or plug them in.

After Padrnos’ 10th– to 12th-graders worked for a few minutes a grid appeared. Thirty-two percent of the class had answered 42 — not correct, but interesting enough to work through. Several kids vied for a turn at the board.

‘There’s no one making fun of you’
One was 11th-grader Allison Schaefer. “Math is not one of my favorite subjects,” she conceded, but she’s emboldened by the Promethean. “You can go up and move numbers and change things and try different things.”

Even better: “If you get it wrong, there’s no one making fun of you.”

Using the clickers, their fingers and a gizmo that looked like a stylus, teacher and class ran through a number of possibilities. Numbers and symbols popped up on the screen, disappearing and reappearing in varying configurations. 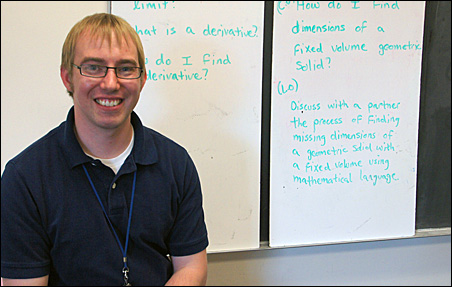 Courtesy of Jolene Goldade-Swanson
Anthony Padrnos: “Most of what drives up test results is engagement.”

After the group came to the right answer — 4x-7, correctly identified by 24 percent — Padrnos asked the kids to identify the slope. This time, they should text in both their answer and their level of confidence.

“Some of you are still struggling with what does that mean,” he said as the number of students who were unsure appeared.

The importance of confidence, engagement
Teachers have long known that students who are confident about math score a few points higher than their less-sure peers. Beyond that, explained Padrnos, 27, “Most of what drives up test results is engagement.”

Students respond to this particular system because it allows the teacher to use multiple technology platforms. Not only does this keep students hooked in by keeping the class moving, it allows Padrnos to tackle a single lesson from several vantages.

Some of the students who identified themselves as unsure about the slope could benefit from a visual illustration, for example. So Padrnos tapped a couple of keys on an old-fashioned laptop and a parabola appeared. As he poked at the shapes they tilted and shifted, as did the deepest points in the Us they formed.

“Visualizing things moving around is very helpful for kids who are not math whizzes,” he said. “Students can come up and move things around and see how everything changes.”

Eleventh-grader Kwjuantiz Yearby agreed, adding that he appreciates the system’s ability to let users back up and try again as often as they need to. “There’s less erasing,” he observed.

Research was lacking
“When I started to do my thesis I really wanted to focus on the achievement gap,” said Padrnos, who has a BA in applied science in math education from the University of Minnesota Duluth. Research was so scarce he first had to collect data on technology’s impact on all kids.

Overall, 67 percent of Hopkins’ high schoolers scored proficient at math in 2009 — the state average. Thirty percent of kids who passed state math tests made exceptional growth that year, as did 16 percent of those who were not proficient.

A diverse district in its own right, Hopkins enrolls a number of low-income minorities from Minneapolis and other suburbs. Because many come from households where there is no computer, basic technological literacy is often a stumbling block.

“Once you bridge that, technology can be a great aid,” said Padrnos. “I’ve had some go from Ds and Fs to Bs largely because they see, ‘Hey, I can do this.’”

He has found the technology particularly helpful when working with English-language learners.

Spreading the knowledge
Padrnos shared his thesis data with Hopkins’ curriculum, instruction and technology staff, and he’s been evangelizing among his colleagues about the Promethean and its kin. Right now, Hopkins has 400 ActivBoards and a similar number of teachers trained in their use.

As Padrnos’ students began to pack up for lunch, he reminds them about an end-of-year canoe trip the next day, and that he’s posting their last test on the class Moodle website. It will be up for five days, so they’ll have plenty of time to sign on and complete the exam.

“I keep trying to find niches to apply this,” he said. “Education is really changing because of technology.”