News
Learning Curve
MinnPost’s education reporting is made possible by a grant from the Bush Foundation.
Aug. 17, 2011

Yesterday, Education Commissioner Brenda Cassellius told her federal counterpart that Minnesota takes full responsibility for turning around its worst-performing schools, but will do a better job if released from the provisions of the No Child Left Behind act, which she called “a failed law.”

Two of the law’s provisions are interfering with educators’ ability to close the achievement gap, the commissioner told U.S. Secretary of Education Arne Duncan: A requirement to show year-over-year improvement on standardized test scores; and financial sanctions imposed on the state’s poorer schools that fail to progress. 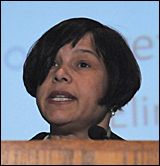 Minnesota, she assured Duncan in a short, succinct proposal attached to a letter [PDF] formally requesting a waiver, has a better plan. Given three years in which performance targets for the state’s schools do not increase, the state will institute a more effective system for measuring student performance that not only accurately depicts a school’s performance, but actually delivers teachers information they can use to help struggling students.

“Minnesota is not proud of the persistent and unacceptable disparities in achievement between and among students that plague our state, and we are urgently focused on correcting this intolerable reality,” Cassellius wrote. “This urgency has brought us to the cusp of nation-leading reform.”

State sets high standards
Currently, schools must show continuous progress on standardized tests or risk failing to make Adequate Yearly Progress, as defined by the law. Because Minnesota sets high standards for student performance, the targets become harder to meet each year. Because of this, schools whose students post excellent test scores can end up labeled failures when a handful of kids don’t do well.

Adding insult to injury, until recently the tests Minnesota used did not actually measure individual student growth or identify gaps in learning. Because poor schools that fail to show enough progress are forced to divert resources from the classroom, failure to make adequate progress can become a self-perpetuating trap for programs with large numbers of struggling students.

According to 2010’s test results, 1,048 Minnesota schools and 297 districts are technically failing, despite five years of progress. As a consequence, 157 will be forced to set aside money that could better be used to implement classroom reforms, Cassellius said. Others will be forced to divert energy from programs that are working to comply with mandatory restructurings required of failing schools.

In essence, the state is paying the price for refusing to compromise, she asserted. Anticipating just this bind, other states years ago lowered their definition of academic proficiency. Providing relief for states that have kept standards high in the face of this pressure is one justification for the waivers Duncan has laid out.

Progress in D.C. stalled
For nearly four years there’s been near-consensus among educators and in Congress that NCLB, which expires this year, needs to be tossed out. But progress toward a replacement stalled last spring when Duncan and the powerful head of the U.S. House of Representatives Education and the Workforce Committee Republican Rep. John Kline of Minnesota, found themselves at loggerheads.

In June, after Kline said he planned to take his time overhauling the law, Duncan invited states that felt they were unfairly penalized by the law to ask for waivers from NCLB. Applicants would have to agree to a basket of unspecified reforms — to be decided upon by the department and not Kline’s committee.

Minnesota’s request jibes neatly with the education plan Gov. Mark Dayton released in February, which called for a realignment of the state’s school-funding formula, a focus on early-childhood education and an end to the excessive administration of useless tests.

On the campaign trail, Dayton was known to pop in on unsuspecting principals and other school administrators to chat about wonky things like how many tests kids should be forced to endure and which models actually would yield useful data.

NCLB tests have taken priority
Many of the schools posting dramatic gains among at-risk students use much more informal, frequent assessments to figure out what concepts — counting by tens, for instance — a student may be missing so as to allow a teacher to help them “scaffold” rapidly up to grade level. Teachers can only administer so many tests, however, and with so much at stake the academically useless NCLB tests have taken priority.

Indeed, there isn’t much in Cassellius’ letter that she and Dayton have not already articulated as part of their vision for closing the state’s yawning achievement gap. But the waiver would make things a lot easier.

The odds Minnesota will receive the requested relief? Montana, which had essentially announced it was washing its hands of NCLB without committing to similar accountability, yesterday reached a compromise agreement with Duncan that stops somewhere short of a waiver.

In closing, Cassellius asked for an expedited response.