News
Learning Curve
MinnPost’s education reporting is made possible by a grant from the Bush Foundation.
Sept. 7, 2011 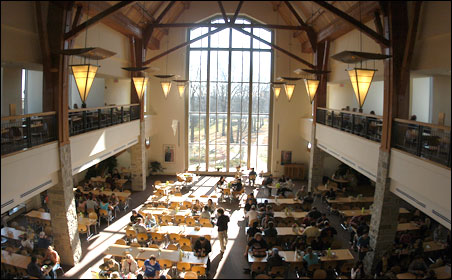 Courtesy of St. Olaf College
St. Olaf’s Stav Hall features sustainable, locally grown food, and, according to a feature in this week’s Newsweek, the best campus dining in the nation.

It’s all sustainable, mostly locally grown and raised and, according to a feature in this week’s Newsweek entitled “The Best Colleges for You,” the best campus dining in the nation.

Yep, little St. Olaf, with its bucolic corn-belt setting, has the best food in the country.

Did a Top Chef finalist get lost on her way to the big city? Did Alice Waters’ kid enroll? We were as curious as you are.

Provided by Bon Appetit
It turns out that catering for the college’s staff and 3,000 mostly residential students is provided by an outfit called Bon Appetit that specializes in providing top-notch food at schools, corporations and “specialty venues,” including the Minnesota History Center, the Art Institute of Chicago and the Getty Center and Villa.

Bon Appetit also dishes up the meals at Macalester, whose geeky brainiacs made the top five in the magazine’s lists of campuses that are service-oriented and attract a large number of foreign students.

(Alas, the only other local college in the package is the University of Minnesota, which appears as No. 4 on the “least rigorous” list.)

But back to Northfield.

‘Farm to fork’ ethic
The 24-year-old Bon Appetit prides itself on its “farm to fork” ethic, which contemplates issues such as overfishing, humane animal husbandry and its carbon footprint. Its fare has twice earned it recognition as the best college food-service company from the Princeton Review, which is one of the sources Newsweek drew on to compile its rankings.

In addition to the posh fare at Stav Hall, the St. Olaf community has access to two coffee-shops and an entertainment facility that has late night snacks.

Bon Appetit gets much of its locally grown produce from a student-run organic farm, St. Olaf Garden Research and Organic Works (STOGROW), apples from an orchard near campus and dairy products from a family farm collective cheekily dubbed Deja Moo.

Jumbo cookies, too
And yes, there’s pizza. And burgers. And cookies the size of your head. This is college, after all.

And yes, Stav Hall is open to the public and yes, most Twin Citians can be in Northfield in under an hour, which is approximately how long you’d cool your heels waiting for a table in a trendy, chef-driven downtown restaurant.