News
Learning Curve
MinnPost’s education reporting is made possible by a grant from the Bush Foundation.
Sept. 29, 2011

You know what they say, just because you’re paranoid doesn’t mean they’re not out to get you.

Do you remember Thandiwe Peebles? The short-lived Minneapolis Public Schools superintendent who expected staff to walk her dog, drive her to McDonalds and complete her doctoral homework? I like to think of her 2004-2006 tenure as the 18 months when Peebles gave the conspiracy theorists at 807 Broadway a lifetime’s worth of grist.

The interval was kicked off by homegrown Superintendent Carol Johnson’s teary departure for Memphis. The board, seemingly unaware that it had a mushrooming race-relations problem (which explains in part why it had a race-relations problem), tapped the eminently competent but white David Jennings, who promptly called for some of the very reforms we’ve spent the last seven years working our way back to.

The African-American community protested, Jennings stepped aside and the board hired a search firm which came up with Peebles but did not check her references. (I did.) We were all surprised when her tenure was characterized by upticks both in test scores and fear and loathing in schools and administrative offices all over the city.

An outside investigation was followed by a $179,000 settlement, followed by some eye-popping revelations about perks in Peebles’ contract ranging from the lease of a luxury car to a spendy health-club membership.

Balm from homegrown talent
The ink on the buyout check was still wet when the board announced that Bill Green was being tapped to spread balm on waters. Since then, MPS has returned to homegrown leadership, as has St. Paul.

And here we arrive at the reason for revisiting this chapter now, in relatively sanguine 2011. Peebles came to MPS fresh from a superintendent training program run by the powerful Broad Foundation, creation of Los Angeles kajillionaire Eli Broad (rhymes with road).

Among the initiatives the controversial and conservative education reformer funds is a program to recruit and train highly successful leaders, often from outside education and many of them people of color, to become urban superintendents.

Urban superintendents are in short supply, so even the newly minted are often the subject of bidding wars. And panicked boards often rush to hire them without due diligence. The name Broad on a résumé counts for something, right?

Another Broad academy grad
John Covington graduated from Broad’s academy — yes, that’s his mug on its website — two years ago and was promptly snapped up by the school district in Kansas City, Mo., which had chewed through five superintendents in about as many years and was performing so poorly it was threatened with state takeover. 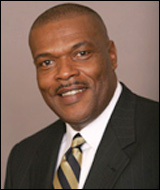 “When Dr. Covington arrived, the district, facing a huge budget deficit, had just 17,000 students in 61 schools that collectively were more than half empty.

“His solution — closing 26 schools and cutting a third of the district work force — passed by one vote on the school board with significant community support. His many other initiatives also passed, including grouping elementary-school students by skill level rather than by grade, combining middle and high school and bringing in more than 150 Teach for America recruits.

“The district balanced its budget for two straight years. And city residents, many of whom long ago had lost faith in school leaders, rewarded Dr. Covington with a school board more supportive of his agenda.”

Added the Los Angeles Times, in a snappy recap I wish I had written:

“Then, suddenly, he was gone, triggering a dust-up that highlights the problem of superintendent retention that many schools face nationwide.”

Abrupt resignation
Covington resigned abruptly in August, two days after arranging a mid-winter cocktail party with the board, two weeks into the school year and not much longer after negotiating a new contract. The board refused to accept his resignation and the editorial board of the local paper begged him to reconsider.

For a few hours, Covington’s resignation was blamed on micromanagement by a board member — something about Covington questioning the member’s role in selecting contractors for $85 million in construction work. So imagine the community’s outrage when it turned out that he had accepted a high-paying job as chancellor of Michigan’s brand new statewide school district made up of the lowest-performing schools.

The editorial page editor of the Detroit Free Press was as scandalized as the good people of Kansas City, questioning the wisdom of hiring a leader who would endanger actual progress toward turning struggling schools around by quitting mid-campaign. And who, instead of simply telling his community he was being wooed elsewhere, might have helped engineer a track-covering scandal:

“In a meeting with the Free Press editorial board two weeks ago, Covington insisted that his departure would have little effect in Kansas City. He said that his approach there had been to deeply involve the community — from parents to teachers to school administrators — in developing a turnaround plan.

“What emerged was ‘their plan,’ Covington said; he was just the administrator of it.

“Sounds good, right? Too many educational efforts rely too heavily on a single leader or personality. Covington insisted that what he’d built in Kansas City was an infrastructure that would persevere and thrive without him.”

Accreditation lost
Except it won’t. Kansas City’s schools lost their state accreditation, a move officials linked to his departure.

Meanwhile, the Freep editorial could have run in any of our news media outlets in 2004:

“The board that hired Covington has some explaining to do, too. He was hired in a hurry, according to a search process that, to date, has not been publicly defined.

“If board members knew about the situation in Kansas City, the public — whose tax dollars are paying this guy — is entitled to a full explanation of how its members sorted through his quick exit from Missouri. Did it not matter?

“Even worse would be if board members didn’t fully understand what was going on in Kansas City; if they hadn’t looked closely at the circumstances that Covington was leaving behind.”

Strong leadership is crucial, education reformers tell us at every turn. And, particularly at the principal level, they have data to back this assertion.

And new leaders can be very good for reform efforts. They can come in with once-heretical ideas, completely ignorant of organizational silos and not so worried about how things have always been done. If they’re not looking to stay forever and ever and have the backing of a brave board, they can make unpopular decisions and then move on.

Michigan did at least one thing right when it hired Covington, in backloading his contract. He did get a $179,000 signing bonus — which I, personally, would certainly consider — but in order to get the full $1.5 million his four years on the job is worth to the state he’ll have to stay and meet a series of performance targets.