News
Learning Curve
MinnPost's education reporting is made possible by a grant from the Bush Foundation.
Oct. 10, 2011 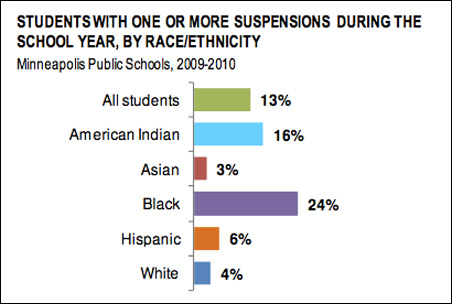 Minority students are suspended from Minneapolis Public Schools at drastically higher rates than their white peers, according to a new report commissioned by The Minneapolis Foundation.

About three-fourths of the 4,151 students who were suspended from MPS schools during the 2009-2010 year were African-American, according to “One Minneapolis: A vision for our city’s success,” a snapshot of the lives of Minneapolis’ minority residents released last week (and covered in more depth by Community Sketchbook’s Cynthia Boyd).

The district’s overall suspension rate crept down from 16 percent in 2005 to 13 percent last year.

MPS’ minority suspension rate is dramatically higher than that of U.S. schools on the whole. A report by the National Education Policy Center (NEPC), also released last week, found 15 percent of African-Americans students are suspended each year — a frequency that the report said should “raise questions about a school’s disciplinary policies, discrimination, the quality of its school leadership and the training of its personnel.”

In response to the report, MPS issued this statement: “Minneapolis Public Schools is aware of and very concerned about student suspensions, particularly concerning students of color. We continue to monitor and address student suspensions in the school district’s academic plan and have a target goal of decreasing suspensions to no more than 4 percent of students by 2015. Suspensions have been slowly decreasing over recent years, but disparities between student groups continue to persist in Minneapolis schools as well as at the national level. We always work to ensure that disciplinary action has as minimal an impact on student learning as possible.”

Minor offenses
What accounts for the disparities? Minorities and disabled kids are often suspended for minor offenses, according to the author of the NEPC report.

A harsh disciplinary strategy, suspensions are supposed to be isolated to those cases where students are overly disruptive or threaten others’ safety. In part because it separates students from the learning environment, suspension is considered by many to be both punitive and counterproductive.

Yet MPS suspends 4 percent of kindergarteners and first-graders and 6 percent of second-graders each year.

Peak in 7th grade
Suspensions peak in middle school, with 24 percent seventh-graders, 22 percent of eighth-graders, and 21 percent of ninth-graders suspended at least once during the year.

Interestingly, unlike other districts, Minneapolis expels almost no students, but does unilaterally transfer hundreds from one school to another as a result of disciplinary issues. The unwritten district policy is an attempt to hang on to kids who would otherwise probably drop out, according to MPS administrators.

Last year, MPS unilaterally transferred 267 students. The vast majority, 197, were African-American. Also transferred were 24 Hispanics, 21 American Indians, 18 whites and seven Asians. The most transfers occurred in 10th grade, with 49, 9th with 41 and eighth, with 32.

Disruptive behavior in the classroom can easily consume a teacher who is operating without a school behavior specialist or other support. One possible antidote: a strong school culture. Lots of odds-beating schools here and in other cities have slashed the rate at which they haul out heavy disciplinary tools like suspensions by exerting a laser-like focus on things like orderly hallways, respectful voices and forms of address.

Black students’ suspension rate at MPS is far higher than others’