The first was passed along by former teacher and voracious reader Ray Schoch who, if hat tips were money, would be taking us all to Bermuda for the next holiday.

The cover story in the Dec. 1 issue of The New Republic, “The Two-Year Window” is behind a paywall, but I daresay it’s worth the price of a subscription. Even if you’re not terribly interested in education or child-care policy, it’s a terrific piece of science writing.

It’s a fascinating story on infant brain development in the first two years of life, a time when adversity can literally reshape the brain for life. Among other things, the story reports the first findings of the Bucharest Early Intervention Project, which studied Romanian orphans who have experienced severe neglect and abuse.

“This past May, a team led by Stacy Drury of Tulane … found that telomeres, which are protective caps that sit on the ends of chromosomes, were shorter in children who had spent more time in the Romanian orphanages. In theory, damage to the telomeres could change the timing of how some cells develop, including those in the brain — making the shorter telomeres a harbinger of future mental difficulties. It was the clearest signal yet that neglect of very young children does not merely stunt their emotional development. It changes the architecture of their brains.”

After age 2, much harder to repair
Researchers, the piece continues, “are still learning about the orphans. But one upshot of their work is already clear. Childhood adversity can damage the brain as surely as inhaling toxic substances or absorbing a blow to the head can. And after the age of two, much of that damage can be difficult to repair, even for children who go on to receive the nurturing they were denied in their early years.”

The story goes on to detail the personal and societal costs of this damage, and lays out research that suggests high-quality early care can go a long way toward undoing damage done during the first part of that two-year window or toward counteracting a home environment where the infant brain isn’t likely to get what it needs.

Which is a tidy segue to the other item of note, a report [PDF] from the Minnesota Department of Education on the gap in education readiness. I’ll append a few highlights, but if you want to read deeper, you might want to check out policy think-tank Minnesota 2020’s synopsis of the report, which is annotated with other valuable reading.

As it has since 2002, last fall MDE, in concert with the Human Capital Research Collaborative, a partnership between the University of Minnesota and the Federal Reserve Bank of Minneapolis, surveyed a representative cross-section of the state’s elementary schools to obtain a picture of school readiness of kindergartners who began school in the fall of 2010.

Looked for markers
They didn’t test the tots per se, but looked for markers like hand-eye coordination, self-care, and knowledge of shapes, ability to participate in dance and other artistic play, etc. In order to be deemed ready, kids had to display 75 percent of desired markers.

Primary home language and race and ethnicity were not statistically significant factors. Girls are more likely to be prepared than boys.

Poverty, however, is. Kids from poorer families, those with incomes below 250 percent of federal poverty guidelines, scored nearly 17 points lower than their more comfortable peers. 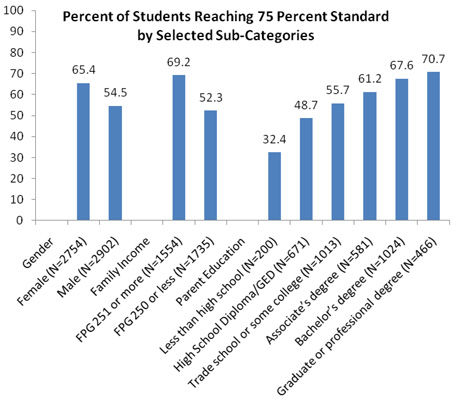 Researchers also looked at MDE’s data on 2003, 2004, and 2006 kindergarten cohorts, who are now old enough to have taken the Minnesota Comprehensive Assessments, which are given for the first time in third grade. School readiness, they reported [PDF], “significantly and consistently predicted third-grade MCA reading and math test scores and the need for school remedial services (special education or grade retention) above and beyond the influence of child and family background characteristics. The strength of prediction was consistent across a range of child and family characteristics (e.g., family income, gender, and race/ethnicity).”

So much for that education vs. poverty dichotomy. Can we consider that one settled and move on?