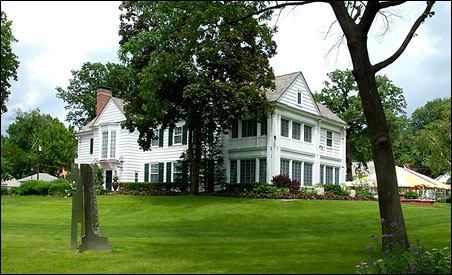 Photo by Patrick O’Leary, University of Minnesota
Who wouldn’t want to come home to a 10,000-square-foot Colonial Revival?

When the phone rang Friday morning, I was momentarily discombobulated. Could I attend to Eastcliff, the woman on the other end asked, for a special audience?

Eastcliff? Could it be Dame Daphne du Maurier, was my first admittedly crazy thought, phoning from another era?

Wait, no — the mansion where the second Mrs. de Winter was driven mad by the specter of the first was Manderley. And “Rebecca” — spoiler alert — ends with manse and housekeeper burnt to a crisp, ergo nothing to visit.

No, the caller was Patty Mattern, the ever-affable head of the University of Minnesota News Service, who was organizing a quick tour of the UM President’s official residence, located on East River Road — hence Eastcliff, get it? — just south of the Lake Street bridge.

I had forgotten: Thanks to a 1988 renovating scandal that helped propel former U of M President Kenneth Keller from office, a new university president typically means fresh rumors of luxe living at the official residence.

It was a tough assignment, touring a historic mansion and its grounds on the last sunny morning of the year. But we at MinnPost are nothing if not dedicated to asking the hard questions. And so I offer you an Eastcliff FAQ:

A: Who wouldn’t want to come home to a 10,000-square-foot Colonial Revival offering sweeping views of the Mississippi River, a sun-drenched sitting room, a pool, multiple fireplaces and a dining room that seats 40? Just think of the parties you could throw!

And then think of the parties the U’s booster in chief, who is contractually obligated to live in the house, has to throw! The Kalers are expected to entertain some 5,000 people a year in the first floor, basement and grounds.

That’s five-plus nights a week of strangers in your living room. That’s more people than visit the governor’s mansion. The Dalai Lama has supped at Eastcliff!

They let their hair down in a private apartment on the second floor. It’s probably safe to assume it’s pretty nice, but it’s also not like an apartment you’d rent on the open market.

For starters, ever since the Keller scandal, it’s been managed by the Friends of Eastcliff, which raises private money to keep things spiffy.

The Friends watch their pennies. In 2005, for example, they replaced a damaged tennis court that would have been prohibitively expensive to restore with a garden.

Eastcliff is decorated with borrowed sculptures by university artists and UM scholars’ books line its shelves. Many of the interior furnishings are less-than-museum-quality items culled from estates donated to the UM. 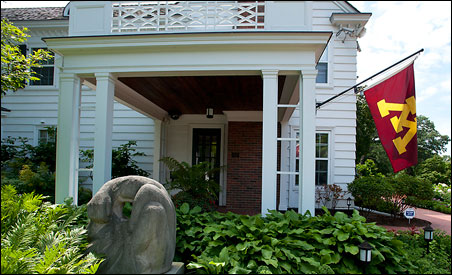 At one point some orange shag carpeting had to be replaced, but surely not even the Tea Party could begrudge that.

Second, Eastcliff has been on the National Register of Historic Places since 2001, which means the Kalers can’t just decide to redo things unilaterally. They did purchase a big-screen TV with their own money for the charming, rustic basement rec room in order to watch UM sporting events with boosters. But you’d better believe President Kaler didn’t get to drill holes in the historic wall himself on a Saturday afternoon.

Finally, since it’s university property everything has to be universally accessible. An elevator installed in 2001 to comply with the Americans with Disabilities Act wiped out a hefty chunk of the second-floor private kitchen, and more recent renovations have made the pool and adjacent changing house wheelchair friendly and, blessedly, mold-free.

Q: So, does every first lady get to pick out her own new china pattern, like at the White House?

A: Can I just note that we’re getting a woman provost, so we’re getting closer to a first gentleman? To answer your question, no. But the president and his or her family do get to borrow art and furnishings from the Frederick R. Weisman Museum, the Bell Museum of Natural History and the Goldstein Gallery.

In keeping with the era of the house, former president Bob Bruininks and his wife preferred art from the ‘20s. The Kalers’ tastes are more eclectic, and the house is now appointed with works by WPA artists, UM student photographers, Native American potters and, along one wall in the formal dining room, a striking modern painting by David Rothman that incorporates physics and engineering references.

A: Not unless you count the aforementioned renovation scandal, which seemingly has not faded to the point where UM News Service staff can stop holding “Eastcliff 101” tours for nosy reporters.

Or unless you count the fact that the architect who designed it, C.H. Johnson, also designed Glensheen in Duluth (now owned by the U), the site of two of our creepier, still-murky murders.

There are, however, three graves in the backyard, the final resting spots for dogs belonging to the family of Edward Brooks, the lumber baron who commissioned the house in 1922 and whose widow donated it to the university in 1958. Rusty and Melvin slumber next to the property’s southern border, according to the two weathered wooden grave markers that are still legible.

Q: How do those of us who are not the Dalai Lama or a nosy reporter get a peek inside Eastcliff?

A: You mean besides making a bequest to the U and getting invited to a party or to watch a bowl game? One way is to obtain a faculty position, distinguish yourself and win an award worthy of celebrating in the glow of the aforementioned Rothman.

Another way is to join Karen Kaler and the Friends of Eastcliff Book Club, which reads great UM works and then discusses them in the hallowed home.