News
Learning Curve
MinnPost’s education reporting is made possible by a grant from the Bush Foundation.
Jan. 20, 2012 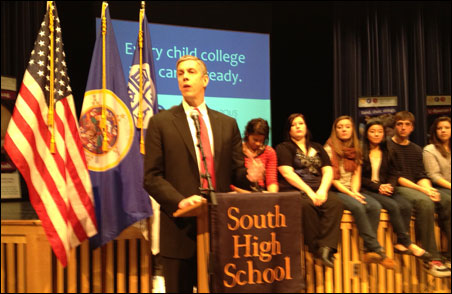 That sudden shift in the barometric pressure you might have felt at about 11:37 this morning? That was the achievement gap narrowing perceptibly in one swift moment.

In Minnesota to talk college and career readiness with a host of notables, U.S. Secretary of Education Arne Duncan hosted a town hall meeting at Minneapolis’ South High School.

The plan was for South’s seniors first to hear encouragement from Duncan’s retinue and then to get advice from the secretary himself on filling out the newly streamlined Free Application for Federal Student Aid, or FAFSA.

Both Minnesota senators, state Education Commissioner Brenda Cassellius, Minneapolis Mayor R.T. Rybak and a Who’s Who of Minneapolis Public Schools leaders showed up to cheer Duncan on — with the mayor, who gave a roof-raising speech about the rich diversity in South’s auditorium — the students’ clear favorite.

The kids had plenty to say about college, but they also fired questions at Duncan about congressional efforts to cut the U.S. Department of Education’s budget, his policy priorities for a second term, should Barack Obama win re-election and reappoint him, as well as the research currently under way at Harvard University’s Edlabs, funding inequities among poor and wealthy school districts, access for immigrants and the corrosive effect high-stakes testing can have on arts and other “non-essential” academics.

Oh yeah — one student did want to talk about the FAFSA. Did the secretary know that the form “skewed heavily toward the traditional nuclear family?”

For kids who don’t go home to Ozzie and Harriet, “It gets so much harder to fill out,” she explained politely.

Duncan looked positively thrilled to lose control of the agenda. “As the mayor said, I think the future is here,” he said. “Unfortunately, this kind of diversity is rare in this country.”

In fairness, Duncan did manage to squeeze in a few talking points.

After a couple of painful years as an also-ran, Minnesota finally has gotten some significant love from Duncan’s DoE, which has awarded initiatives here a total of $88 million in competitive grants aimed at rewarding innovation in recent weeks.

“Those aren’t gifts,” the secretary said. “Those are investments.”

Just like the investments the seniors in attendance could expect to make if they enrolled in and completed college.

Noting that the Obamas’ combined student debt after both finished law school topped $120,000, Duncan described some of the things his administration is doing to address mounting student debt loads.

Starting this year, graduates’ repayment rates will be pegged to income, capped at about 10 percent, for instance. And grads who go into certain public sector and nonprofit jobs will be eligible for wholesale loan forgiveness after 10 years of service, Duncan said.

Not that a B.A. and a J.D. should be every college-ready high school graduate’s goal, Duncan was careful to note. Students who qualify for Pell Grants can choose to attend community college “basically for free,” he added.

Duncan’s answers to the kids’ questions?

On the GOP’s desire to slash his budget: Obama has asked Congress to increase education spending by $4 billion, a hike he can’t guarantee the lawmakers will agree to.

“The investment is just that,” he said. “And anybody who thinks you don’t need money to increase the quality of education is intellectually dishonest.

“Having said that, money is not the only solution.”

On access to college for immigrants: “The place to start is the DREAM Act — that has to pass,” he said, to universal student applause.

The Edlabs question drew first a guffaw, and then a quip about the political savvy of the fair-haired overachiever who posed it. If you are enough of an insider to care about the answer, it’s this: Charter schools per se are not magic. Many are terrible, but the best offer lessons for mainline public schools, just as many traditional schools have found gap-closing strategies worthy of replication.

It’s good, then, that Minneapolis Public Schools is among those districts that have formed formal collaborative with its local charter sector.

Duncan disagreed just a little with the premise of the question about dwindling funding for arts and other non-essentials “that don’t show up on the SATs.” “I think they do show up as a number,” he said. In addition to critical thinking and intellectual curiosity, “I think they keep you in school, keep you wanting to go to class.”

Inequities in funding are likely to persist because so much education funding is local, Duncan said. Which only makes the aforementioned investments all the more crucial.

And finally, to the young lady in the plaid shirt who sweetly criticized the FAFSA, Duncan issued an invitation to provide specific feedback on family situations the form does not contemplate, as well as a smile at the news that she had in fact filled it out anyhow.

“We need to lead the world in college graduation rates,” said Duncan. “We used to lead, but now we’ve flat-lined.”