News
Learning Curve
MinnPost’s education reporting is made possible by a grant from the Bush Foundation.
March 6, 2012

Last night, school-board members in the Anoka-Hennepin School District, which has experienced a wave of student suicides in recent years, approved a 61-page consent decree settling two federal investigations and a major lawsuit brought by six students who said district staff turned a blind eye to bullying over their perceived gender identity or sexual orientation.

The agreement commits the district to making crystal clear both its support for gay, lesbian, transgender and bisexual students and its anti-bullying policy, and requires it to track, investigate and promptly address reports of harassment.

Too bad the settlement doesn’t also include a truth and reconciliation commission. The accountability measures in the decree appear capable of making the district’s schools safer, but it’s clear any healing has only just begun.

Indeed, the press conferences that followed the historic vote were marked by tears, denunciations and an effort by a district communications staffer to shut down remarks by the teen plaintiffs and their lawyers.

Seconds into its scheduled meeting, the board voted 5-1 to approve the agreement, and then adjourned to the lobby of its Coon Rapids headquarters.

Superintendent Dennis Carlson, whose public statements throughout the controversy have been both contradictory and anguished, appeared palpably relieved. “Our gay students deserve to feel safe and be safe,” he said.

Administrators were unwilling to admit that mistakes were made, however.

“The district determined through an exhaustive investigation that our administrators and teachers dealt with the harassment reports in a professional, timely and appropriate manner,” said Board Chair Tom Heidemann. “We are concerned that a monetary settlement negotiated by our insurer, Riverport, leaves the impression that our staff did not take appropriate action.”

Continuing to fight the suit would have cost the district “millions,” he added.

Board member who voted ‘no’ resigns

Moments later, board member Kathy Tingelstad stepped to the podium and announced her resignation. The district, she said, had been “targeted by outside advocacy groups” that “bullied” her and other Anoka-Hennepin leaders. 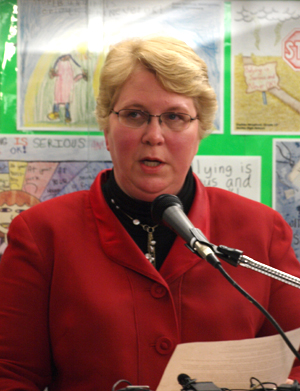 “With my no vote tonight, I do admit I am afraid of retaliation by these out-of-state organizations,” she said. “I am disappointed.”

Enforcing the settlement will use up scarce funding, give the federal government an inappropriate amount of control over local issues and set a bad precedent, she said.

Tingelstad was followed by Sam Wolfe, the Southern Poverty Law Center attorney who led the plaintiffs’ legal effort. “The gag policy is now a relic of the past, as it should be,” he said, referring to the so-called curricular neutrality policy, which the board replaced last month.

Wolfe praised his young clients, several of whom were clustered nervously behind him, some holding hands. And then he stepped to one side, as if to cede the microphone to them and their parents.

‘This press conference is over’

But Brett Johnson, assistant director of the district’s communications staff, moved between the plaintiffs and the press and declared the press conference over. Reporters demanded clarification – was Johnson going to shut off the audio-visual equipment? The power? Was the media being asked to leave?

“This press conference is over,” Johnson repeated several times.

After a moment of stunned silence, a cameraman burst out, “Are you really going to do this?”

Johnson’s boss intervened, but the students appeared overwhelmed. The first to agree to take questions quickly was overcome by tears. Several of the others put their arms around him and one stepped to the podium to bail him out.

‘Teachers are trying, I can see it’

“Every student deserves a good education,” said Dylon Frei, a ninth-grader at Anoka High School. “I didn’t get one, but it’s getting better and will be better for these kids.

“Teachers are trying, I can see it,” he added. “I haven’t had an experience for the last month and a half, and that’s something.”

“I personally am pleased that the district recognized that the status quo wasn’t working,” said Michael McGee, the father of one of the plaintiffs. “Thank you to the six of you for telling us something needed to change.”

In November 2010, in the wake of several student suicides, the U.S. departments of Justice and Education separately informed the district it was investigating complaints that students’ civil rights had been violated.

The mother of 15-year-old Justin Aaberg, who hanged himself the previous summer, and friends had begun complaining at board meetings and in the media about what they characterized as the district’s indifference to an epidemic of harassment.

In response, Carlson told staff, board members, and the news media that an outside investigation failed to turn up any evidence that any of the deaths involved bullying. Indeed, he insisted, no one could find a teacher or staffer who had received any complaints.

A couple of months later, two lesbians who were denied permission to walk holding hands in a Champlin Park High School pep rally sued, with the backing of Faegre & Benson and the Southern Poverty Law Center. The district settled with the couple, but did not change the neutrality policy, which many blamed for sowing confusion about staff’s ability to intervene to protect LGBT kids.

In July, the law firms and the National Center for Lesbian Rights threatened to sue if the policy stayed in place. The parties quickly began mediation with federal Magistrate Judge Steven Rau.

In addition to $270,000 for the plaintiffs, the agreement requires the district to retain an outside equity consultant from the Great Lakes Equity Center, hire a Title IX/equity coordinator to oversee its harassment policies, monitor compliance and support student gay-straight alliance clubs.

Staff will receive more intensive training and each school will additionally have a staffer with further training designated as the go-to person for anyone with complaints, questions or reports of incidents. A mental-health consultant will be retained, and a controversial anti-bullying task force, now staffed by district legal and communications staff, reconstituted to include teachers and other staff, as well as students and parents who are active in the aforementioned GSA clubs.

Possibly most crucial, the district is now required to track reports of incidents, investigate them in a timely fashion and maintain enough data about each report for outside reviewers, including the federal agencies involved in the settlement, to decide whether it is complying.

The changes will be paid for using state funds allocated for districts to pay for safety measures as well as some of Anoka’s federal Title IX money. The settlement, as board chair Heidemann explained, will be paid by the district’s insurer.

The settlement goes well beyond what Minnesota’s weak state law requires and, if implemented in good faith, approaches the widely lauded measures in place in Minneapolis, St. Paul and other districts.

The agreement will remain in force for five years. If disputes arise over its implementation, the parties will return to Rau’s St. Paul courtroom.

“As a district, we have made significant progress,” said Carlson. “The most important thing we can do as adults is to model relationship building and honoring and respecting each child that walks through our public school doors. Words can either destroy the spirit of a child or build that child up.”