News
Learning Curve
MinnPost’s education reporting is made possible by a grant from the Bush Foundation.
April 25, 2012 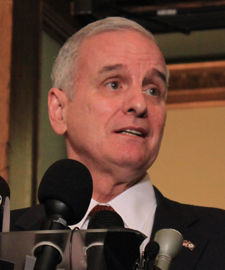 Gov. Mark Dayton today said that as the Legislature heads into its final days he is open to compromise on any issue except the proposal to end seniority-based teacher layoffs in Minnesota.

The governor made his remarks during a press conference about the proposed Vikings Stadium, according to Capitol reporters.

Lawmakers had been withholding final passage of the measure to allow time for a compromise to be brokered. The governor’s wish list for the current, off-year session has been short and the bill, popularly dubbed LIFO for “last-in, first out,” is too “clean” to contain much wiggle room.

Lobbyists for several education organizations said they were not surprised by Dayton’s impromptu remarks. The governor has said repeatedly that passage of the measure was premature. The performance evaluations the bill proposed be used to lay off less effective teachers first is still under development.

Citing public support for an end to quality-blind layoffs, a number of advocacy groups have been engaged in advertising campaigns on the issue and have asked followers to call the governor to urge he reconsider. For more about the bill, go here.