News
Learning Curve
MinnPost's education reporting is made possible by a grant from the Bush Foundation.
May 25, 2012

On Thursday, while rain rattled the windows in their first-grade classroom in Minneapolis’ Nokomis neighborhood, two little girls sat quietly in the far corner. They’d made a little moat around themselves using picture books and were snuggled up together reading "Trumpet of the Swan."

At Hiawatha Leadership Academy, the K-4 charter program that moved into the mothballed Minneapolis Public School building several years ago, and its newer middle-school sister, Adelante Prep, every classroom adopts the identity of a college or university. The kids inside are called after the school’s mascot, which makes the girls Gophers.

Down the hall, in the old-fashioned gym, a group of kids were practicing a musical involving Captain Hook, a slightly distracted alligator and some complicated choreography. A few doors farther, in the St. Mary’s University classroom, middle-school math teacher John Kaczorek (who doubles as Adelante’s principal) was wedged into a student-sized desk next to a boy who needed a little help.

It was, in short, a pretty ordinary day — except that earlier in the week when the Minnesota Department of Education rolled out its new school performance rating system, the five-year-old Hiawatha suddenly became the state’s most successful school.

Last year, when Minnesota asked for a federal waiver from compliance with No Child Left Behind’s failed accountability system, Education Commissioner Brenda Cassellius instead proposed instituting a system designed by the department. The Multiple Measurements Rating (MMR) [PDF] is a combination of scores quantifying proficiency, student growth, progress toward closing the achievement gap and graduation rate.

Unlike the way some states responded to No Child’s standardized testing regime, Minnesota’s new model does not lower the standard for proficiency. In fact, the bar for math rose last year.

The basic idea behind the MMRs: Measuring how well students who start out ready to learn in schools with homogenous populations doesn’t reveal much about how much learning is taking place. Combining multiple measures, by contrast, reveals schools doing outstanding work with disadvantaged students, as well as schools that truly are underperforming.

Hiawatha’s scores earned it the No. 1 spot on the state’s list of “Reward” schools, the highest-performing 15 percent. The program’s overall score was 99.79 percent of a possible 100. Its achievement gap rating was an eye-popping 99.94 percent. The numbers are all the more astonishing, given that 96 percent of the schools’ 453 students are impoverished, 98 percent are minorities and 76 percent are learning English.

Only one school, the Prior Lake charter Aspen Academy, had a higher overall score of 99.94 percent. Because fewer than 40 percent of its pupils are impoverished, Aspen is not a Title I school, which means, essentially, it has no gap to close.

Nine of the top-ranked 10 schools with student poverty rates of 85 percent or more are charters that employ strategies similar to Hiawatha’s. 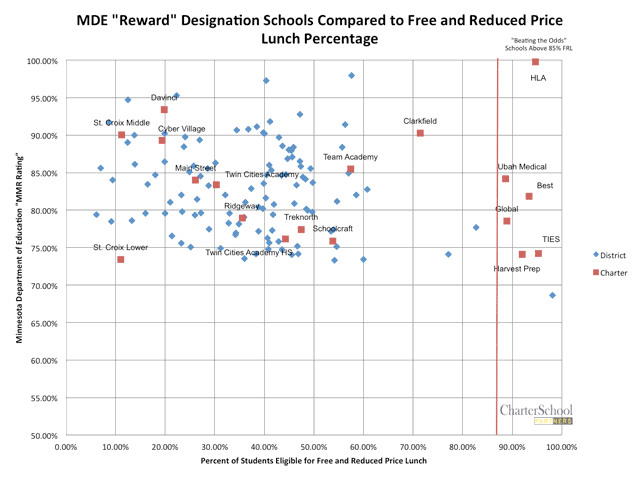 Courtesy of Charter School PartnersNine of the top-ranked 10 schools with student poverty rates of 85 percent or more are charters that employ strategies similar to Hiawatha’s.

The 10th is the Minneapolis Public Schools' contract alternative Heritage Science & Technology — an odds-beating charter in every respect except its legal designation. Like Hiawatha, seven are members of the Charter School Partners network of high-performing schools.

And here we must pause for Learning’s Curve’s lengthiest Kramer Disclaimer yet: CSP employs Katie Barrett-Kramer, wife of Teach for America President Matt Kramer and daughter-in-law of MinnPost founder and Editor Joel Kramer and Chief Revenue Officer Laurie Kramer. I have never met Barrett-Kramer, and none of the aforementioned Kramers has been associated with any of my reporting on CSP or Hiawatha, except for that whole check-signing bit.

I was invited to tour Hiawatha earlier this year after I wrote about some legislation that would encourage its replication. I heard from several teachers and from the school’s founder and principal, Shannon Blankenship, about its strategies for success.

Two days later, a family emergency forced Blankenship to resign. He has been replaced, at least for the interim, by yet another Kramer, Eli, who was kind enough to inform me when I called him for this story that there is in fact yet another Kramer lurking out there, but not in education circles.

He had better be right. For someone whose ethics demand disclosure of potential conflicts, navigating the Kramer Diaspora has come to feel like running through a jungle laced with trip wires. I plan to demand hazard pay.

Back, then, to our regularly scheduled programming. Blankenship and Eli Kramer both ascribe Hiawatha’s success to the belief system staff and students share.

“We believe that all students have the potential to succeed,” said Kramer when I called him. “And we promise our families — and we really believe in this — that we will do whatever it takes.”

To that, add a combination of strategies: Between longer school days and years, Hiawatha and Adelante students spend 40 percent more time at school; strong leadership; and the expectation that teachers will be relentless in the use of quizzes and other tools to determine, in every class period, every day, where each student is in terms of mastering the material. 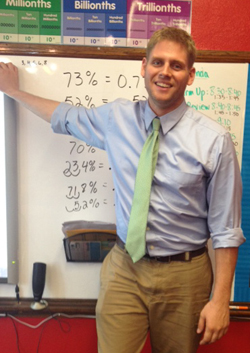 An example: During my January visit, I spent some time watching Kaczorek, the aforementioned math teacher, figure out where one of his classes stood in relation to a unit involving estimates and the addition of multiple digits.

In every Hiawatha class, kids “punch” an exit ticket. In Kaczorek’s math class, this consists of reporting their answer to the problem of the day by clicking a wireless remote. The students also do their computations on small dry-erase boards, which they leave at their desks.

Literally the moment class lets out, the teacher can call up a bar graph showing how many and which students got the lesson. The unit Kaczorek walked me through started on a Friday, when the right answer eluded about a third of the kids.

On Monday, he chose someone who used an alternate means of arriving at the correct answer and had them walk their classmates through it. After that day’s exit tickets had been tabulated, it turned out the new way had worked for another 10 percent.

The next day, Kaczorek was able to narrow the repetitive portion of his lesson down to the two questions he knew would deliver the most bang. He stuck with the struggling kids until everyone was up to speed.

“We believe you’ve gotta fail before you can learn,” he said.

This approach means extra seat time for kids — Hiawatha’s day runs from 7:30 to 5—and for teachers. Kaczorek spends some two and a half hours a day prepping and analyzing data, and he is expected to keep his phone on at night for students and parents who need help with homework.

“In most schools you actually don’t know whether they got it,” Kaczorek said. “You think, ‘I gave it to them four or five times, I sure hope they got it.’ ”

Other classes’ exit tickets may consist of short, individual conversations to test for reading comprehension and fluency or having science students pose a hypothesis and report its validity.

And indeed, Kramer cautiously tempered his pride in Hiawatha’s rating with a few caveats. The school’s score is as much proof that kids can learn despite their socioeconomic level and English-language-learner status as it is an endorsement of Hiawatha per se.

And with interest growing in creating more gap-closing schools and in replicating their best practices in mainline public schools, Hiawatha could easily tumble in the ratings next year because it gets company.  Hiawatha’s board has a plan to open three more schools in the next eight years — two more middle and elementary schools and a high school — enabling it to serve more than 2,000 students.

This, in the end, appears to be the reward for being a “reward” school. “If the reward for doing this well is to do more, then we will do that,” said Kramer. “Our work is not done. Our job is to prepare every single child who comes to us for college.”

The table below, prepared with data compiled by Charter School Partners, lists schools with "Reward" designation under the new Department of Education standards that also have high rates of students living in poverty. All of the schools listed are Title I schools.

Get to know Hiawatha Leadership Academy, Minnesota’s ‘most successful school’