News
Learning Curve
MinnPost’s education reporting is made possible by a grant from the Bush Foundation.
June 11, 2012

Let’s say you are the dean of the fourth-ranked law school in a four-law-school town. Like other programs, your applications for admission have sputtered from robust to anemic. Hardly anyone but you is brave enough to say so publicly so far, but the jobs aren’t coming back.

As it did pretty much everywhere, a recession popped a legal-sector bubble in your community, also deflating the popular notion that your degree is a one-way ticket to prosperity. You can barely crack open the paper without finding a headline shrieking about the number of new JDs in this country who can’t pay their rent, let alone their loans.

You have a great product, delivered by a fabulous faculty, but is that enough anymore?

Your business model might just be as anachronistic as the market you’re sending your grads into. Lawyers are being replaced by technology and/or by off-shore competitors, and the big firms are subject to the same kind of downward pressure on pricing that bulldozed a financial trough through health care and other once-untouchable industries.

Play to your strengths

What do you do? The dean of the Hamline University School of Law, Don Lewis, has an idea: You go in search of a game that plays to your strengths. 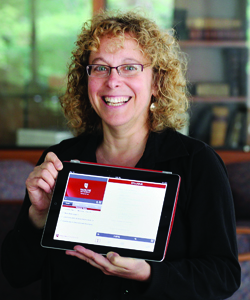 Courtesy of HamlineHamline is one of the first law schools to offer
a mobile app.

Next year, Hamline will enroll an entering class of prospective JDs that is one-third smaller than in years past. Its offerings, however, are swelling — many of them aimed at non-lawyers.

Meanwhile, the advent of the iPad has enabled Hamline to become the first law school to conduct class via mobile app.

A one-time assistant U.S. attorney and co-founder of Halleland, Lewis, Nilan & Johnson, Lewis is poised to reinvent the whole concept of law school. As he sees it, there may be far fewer jobs [PDF] for people who earn law degrees and then pass the bar exam, but the demand for professionals in other fields who have specialized legal training is surging.

Schools have long offered certificate programs to help would-be attorneys specialize in a particular kind of law after they pass the bar. But several of the nine certificate programs offered by Hamline law are open to people who are not law students or lawyers. Lewis would like to add more.

Indeed, the nontraditional students don’t even need to be in St. Paul to attend class. Students in this year’s inaugural international business negotiation certificate program, for instance, each were given an iPad bearing a first-of-its kind app developed by Hamline’s Dispute Resolution Institute (DRI). The tablets contain class readings and links to supplementary online content and allow students to convene via Apple’s chat and FaceTime features.

Admissions directors at Twin Cities law schools are cagey about the number of applications they receive, arguing persuasively that there are caveats galore. Applicants typically apply to more than one school, applications to top-ranked schools sometimes rise even as they are plummeting elsewhere as students weigh the cost of their degree against their job prospects and institutions have been known to engage in creative accounting to preserve their profiles.

In general, it’s safe to say the applicant pool has been shrinking quickly since 2008. Applications for the 2010-2011 class were down 10 percent at all but the top schools. They dipped 11.5 percent further to a 10-year low the following year.

For the fall of 2012 [PDF], the number of applicants nationwide is down 14.4 percent and applications 12.6 percent. As of June 1, 65,119 applicants had submitted 462,825 applications. Hamline’s numbers “have conformed with the national trends very closely,” according to administrators.

The contraction in jobs has been swift, too. According to the U.S. Bureau of Labor Statistics, some 12,000 legal sector jobs disappeared in 2008, 41,900 in 2009 and 2,700 in 2010. As job losses by experienced attorneys have trickled down, the number of new grads forced to take jobs that do not require bar passage has surged.

Just two-thirds of 2011 grads had found jobs requiring bar passage in their first nine months out of school, a 9-point drop since 2008. The overall employment rate, 85 percent, is the lowest it has been since 1994; it would be even lower except that 5 percent of the class was employed through law school jobs programs.

Of the class of 2010, only 68 percent found jobs requiring bar passage; 10 percent found positions where a JD is preferred. More than one-fourth of the jobs were temporary and 10 percent part time.

Meanwhile, the markets and practice areas that are rebounding dovetail with Hamline’s specialized offerings, particularly in health-care law. Demand for workers who have skills in regulatory compliance is growing, but those employees don’t necessarily need to invest three years and six figures in a full-fledged law degree.

Nor do they need to quit their jobs and go back to school, thanks to technology. DRI Director Sharon Press has enrolled a cohort of certificate candidates from Hong Kong who will be able to interact with classmates who are attending the old-fashioned way, in St. Paul, via their iPad apps.

“Our goal was to produce an experience that would combine traditional face-to-face with a technology that truly enhances the ways students interact with the curriculum, their teachers and each other,” said Lewis.  “What we we’ve learned in these successful certificate programs will inform how we use technology to enhance other offerings, including our JD programs.”

If Lewis has his way — he’d have to win over accrediting authorities at the American Bar Association, among others — the number of non-JDs with legal training that could eventually include a master’s degree or other work-force-driven possibilities could grow in all kinds of directions.

To cope with changing market, Hamline retools with Law School 2.0