News
Learning Curve
MinnPost's education reporting is made possible by a grant from the Bush Foundation.
June 5, 2012 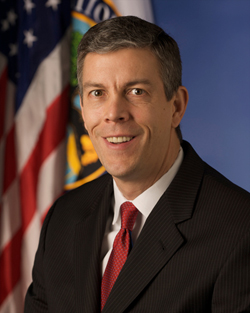 U.S. Secretary of Education Arne Duncan: Crazy, or crazy like a fox?

Buried in the fine print of the proposed guidelines for the next round of federal Race to The Top school grants is a shot of schadenfreude for teachers: The same student achievement data that states are under pressure to use to evaluate teachers must be used by districts hoping for a slice of the $400 million in funding to evaluate principals, superintendents and school boards.

Yes, school boards. Which probably vary in their levels of competence, professionalism and vision more than any of the other players in the proposed evaluation pipeline, never mind the outsized ugly sticks they are empowered to wave unpredictably at pretty much any target they choose.

Leaving aside for a moment the big question — namely, is tying student test data to the tenure of an elected official even possible? — is it a good idea? I don’t know, but I think it’s an interesting one.

It is widely believed that great board members hire dynamic, visionary superintendents and create conditions in which they can implement their ideas. If it works, they renew the supe’s contract. If it doesn’t, they need the spine to acknowledge a poor fit and retrench.

Unfortunately, given that so few have formal preparation for board service by the time they figure this out, many members are burned out by what is, after all, a really, really hard and typically unpaid job.

By contrast, broadly speaking the least skilled school-board members have an annoying tendency to misunderstand their highest-potential roles, to micromanage the business of the educators and administrators they oversee and to launch big initiatives that languish the second they quit.

Bad board members also have an irritating propensity for firing good superintendents, who are then doubly hard to replace because they are rare as hen’s teeth and, thus able to be selective about their postings, loath to work in districts with notorious boards.

Let’s back up a moment. Last week in an interview with MinnPost, among other places, Duncan started talking about the next round of competitive RTTT grants, which he hopes to hand out by the end of the year. This time the money will go directly to individual districts or district consortia that are engaged, among other things, in labor-management collaborations and that propose to use the funds to engage in providing individualized learning opportunities that show promise for replication elsewhere.

States competing in earlier RTTT grant rounds and applying to Duncan for waivers from compliance with the rigid testing schemes prescribed by No Child Left Behind had to agree to use student performance data as a part of teacher evaluations. The rules for the newly announced round stipulate that by the 2014-15 school year, districts must implement evaluation systems for principals, superintendents and school boards that take student outcomes into account.

Many districts have long evaluated superintendents on a regular basis, and during the recently concluded legislative session Minnesota passed a law mandating principal evaluations based in part on student achievement data.

The issue of evaluating boards

But boards? We tend to assume that their rightful evaluation happens at the ballot box. And true though that is on one level, the average voter may have no idea whether their elected representatives are empowering district leadership and staff to do great things or hamstringing them. Indeed, the list of innovative superintendents who stood up to corrupt or obstructionist board members only to find themselves suddenly deemed poor performers is too long to print here.

I don’t know how Duncan imagines rewarding or sanctioning poorly performing boards, but there is some support for the concept of regular board self-evaluations as a matter of course. The Minnesota School Boards Association helps anywhere from 12 to 20 boards voluntarily engage in this process each year.

Boards can hire the association to assess members’ views of their performance in five areas: Vision, structure, accountability, advocacy and conduct and ethics. Members, sometimes in conjunction with the superintendent, fill out anonymous reports, which the MSBA then compiles into a presentation on the group’s overall performance and steps it can take to shore up weaknesses.

Reluctant — but often pleased with feedback

Boards are often reluctant to take on a self-assessment, but typically very pleased with the feedback they receive and the suggestions for improving the way they do business, according to MSBA spokesman Greg Abbott. The association would be happy to talk about the process and its potential with any district that is interested in preparing a RTTT application, he added.

Will any? This, I think, is as dicey as the notion that Duncan’s 360-accountability dream is just around the corner. Simply put, the red tape-to-cold hard cash ratio will make applying pretty hard to justify. To qualify, districts or consortia must have 2,500 or more students and at least 40 percent must be impoverished.

The largest districts are most likely to have the requisite grant-writing capability and the newly required data-tracking systems, but the maximum award of $25 million spread out over four years isn’t likely to inspire a stampede. An exception among the biggest of the big: Houston, which boasts 203,000 students and is located in the Republic of Texas, whose state government is opposed to virtually any kind of federal role in education, including RTTT.

Is it a good idea to evaluate school boards using test data?