News
Learning Curve
MinnPost’s education reporting is made possible by a grant from the Bush Foundation.
June 7, 2012

Say what you will about stadiums, property taxes, snow removal and all of the other items by which our mayors live and die politically, Minneapolis and St. Paul are blessed with chief executives who happen to be deeply, passionately interested in education and just geeky enough to understand its political topography.

And R.T. Rybak and Chris Coleman also just happen to be governing in an era when policymakers are increasingly tempted to hand mayors control of their cities’ schools, on the theory that vesting both authority and responsibility in the hands of one elected official is the way to get the Titanic turned.

The idea has been floated — indeed, waved at the central cities like a giant set of nunchuks — at our own Capitol in recent years. Every time it comes up, Your Humble Blogger wonders: Do the policymakers who typically raise it really intend to hand more power to a couple of guys from across the aisle? Do they even know what kind of School Czar they’d be anointing?

MinnPost recently sat down with both mayors to find out what they think about the notion. It is nigh impossible to get two mayors in one place, so the Q&A that follows is compiled from the edited transcripts of two interviews, during which we attempted to cover the same ground.

MinnPost: Has anyone asked you if you want mayoral control? What do you think about the concept?

Chris Coleman: I don’t know that I have actually been asked that question. I did have a couple conversations [with lawmakers] on unrelated topics that led to the discussion of mayoral control. But it wasn’t exactly the most sincere effort, I think in history of the Legislature, to determine where we wanted to go with this.

The first issue is what is the role of mayor in the educational system? I think it’s very clear that mayors that care about future of the cities have to be engaged deeply in the conversation of education, but that leadership can take many forms. It can be in the form of mayoral control like you saw in New York and Chicago and Boston, which is probably the most successful example.

Part can be the way we’ve engaged in over the last few years, which is to work side-by-side with the superintendent, help develop a network of out of school time programs, work on the Promise Neighborhood application.

R.T. Rybak: Absolutely. Other elected officials and people on the street ask me that question sometimes twice a week. It’s a very hot topic, but really the wrong question.

I think we should explore whether a mayor can or should be part of nominating the superintendent. Again, these are ideas to just consider. One idea could be for the superintendent to be like a police chief, nominated by the mayor but approved by, in this case, the school board, which would tie that superintendent to all those people in the city who the most visible elected official is accountable to. People know who I am, OK? They see me walking down the street. They can stop me. They know where I work. And if nothing else, a mayor is absolutely accountable.

MP: Would mayoral control increase accountability? That is its ostensible selling point.

RTR: The model of the holy mayor running roughshod over everyone and making arbitrary calls I think has been romanticized, and is not that effective. There are huge issues of governance and integration with the rest of a community that a mayor can use to have a huge impact on education. So there’s a difference.

There are some points that I think are really important, especially in our community. Number one: Everything that happens here has to be run through the filter of the fact that we have one of the largest achievement gaps of any community in the country. It’s a crisis, so we need to take some urgent, immediate actions. Right now we have what I would consider an imperfect governance model that, for better or worse, means it’s almost impossible for some people who are deeply involved in the civic world but not politically savvy to bring their expertise onto a school board.

I support electing school board members. I believe, in fact, we’ve made good progress with the [so-called Davnie bill] to have district-based representatives. However, getting through the DFL endorsement process is not the only criteria that people need to be on the schools. One thing we should explore is having some citywide, civic-minded, nonpolitical people appointed by a mayor in combination with local elections.

Take people who have deep experience in management or education administration, who could be a phenomenal board person but a terrible candidate. That kind of person could be added to an elected board by a mayor to enhance its strength. 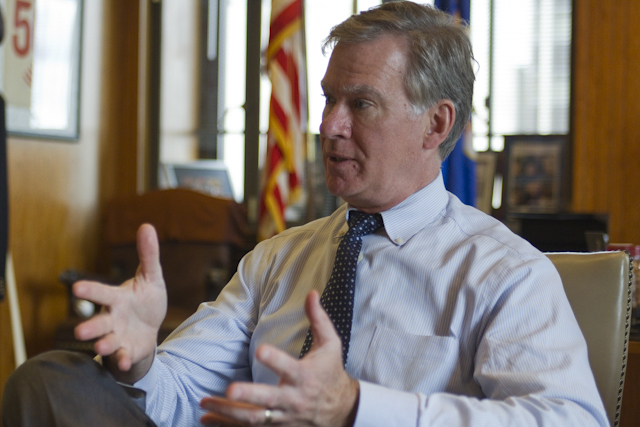 MinnPost photo by Terry GydesenMayor Chris Coleman: “We’re looking at very specific strategies to integrate the work the city is doing with what’s happening in the classroom.”

CC: You have to be a little careful about that. Certainly there’s no question a strong executive has the ability to direct more fully the operations of the schools and can make change quicker than a board process potentially. The current system sometimes makes it a little difficult for major changes to be made quickly, but change is still being made. The challenge is while it adds some accountability it also politicizes the process.

People talk about mayoral control as if it’s a given that it closes the achievement gap. The fact of the matter is what the research shows is there certain aspects of it that do have a very positive effect. [Mayor Michael] Bloomberg was able to do some very significant things, but if you look at the achievement gap in New York, if you look at the disparities, 12 years after mayoral control began the problems haven’t gone away.

Are they better than they might otherwise have been? Probably, but it’s not a cure-all.

Nor, in the absence of it, are you unable to solve the problems. I think we are demonstrating in St. Paul that there’s a third way, where the mayor is very involved in the educational discussion, works very closely with the superintendent and the school board members, to try to achieve some outcomes.

MP: What are the limits? How far can you push that?

CC: We’re looking at very specific strategies to integrate the work the city is doing with what’s happening in the classroom. Let’s take one area research shows to be a major contributor to the achievement gap, and that’s the summer learning loss. Our kids start off at different levels when they go to school. They make similar progress throughout the course of the year, and then during summer one group of the kids is continuing to be engaged in educational learning opportunities.

They are going on field trips, they’re going to camp, they’re going to science museums — they’re doing all these things. And another group of kids are not participating, and a lot of times they get to first grade, second grade and the achievement gap has increased substantially just over the course of the summer. Through the years that just keeps on getting exacerbated. So that something we can [address] with our resources at the libraries, Parks and Rec Department, the nonprofit organizations. We’re working to figure out how to solve the transportation issues for kids to be able to participate.

We have a whole series of programs we’re doing in the Promise Neighborhood, work that shows the city takes very specific interest and a very specific role as a lead partner with the school district and the foundation community.

MP: I have a really vivid memory of watching Mayor Rybak tell a past board that was about to vote to enact some pretty radical reforms recommended by McKinsey & Co. that the city stood with them. And I remember at that moment it felt in that room like it had weight. Is that a better role than that of controller?

RTR: That’s a really good example. Regardless of what sort of control [I have] on paper, I have very aggressively stepped out and used the clout that a mayor has to create support for our board when they do something that I think represents where we should go. Being on the school board is an unbelievably tough job, and my default position is to support people who put that much time into helping our kids.

My responsibility is also to call out when I see something moving in the wrong direction. I should have been more aggressive when [ousted former Superintendent] Thandiwe Peebles was being hired, and I willingly say that was one of the bigger mistakes that I made — to remain silent when I should have done more.

I pushed very blatantly for the appointment of Superintendent Bernadeia Johnson, and I think every member of the school board is very clear that I am an extremely strong supporter of her. I will support everything she does.

CC: Right now I have a fairly seamless relationship with Superintendent Valeria Silva. We work very closely on these issues. Just look at what she has been able to accomplish the last couple of years. She’s tackled some tough budget issues. The Strong Schools, Strong Communities initiative was a radical change that was really directed at the heart of the achievement gap, trying to make sure all of her children have resources they need to be successful.

And parents still believe in St. Paul Public School system. They really understand it’s a great place to get an education and there are different opportunities for kids depending upon what your interests are.