News
Learning Curve
MinnPost’s education reporting is made possible by a grant from the Bush Foundation.
July 12, 2012

Pity Cargill Chairman and CEO Gregory Page. Wednesday afternoon, as he stepped to the front of the room where the University of Minnesota Board of Regents was waiting to hear from him, the bank of TV cameras that had, until that precise moment, been trained on the seat he was settling into rushed out of the room.

Page was there to talk to the regents about the little matter of Minnesota’s future prosperity. The cameras were there, of course, to announce to the world that the regents had decided beer can be sold at TCF Bank Stadium.

Pity Page further: That unanimous decision came on the heels of a lengthy session of regent commentary on everything from the history of temperance in Minnesota to the difference between problem drinkers and devotees of “tailgating culture.”

The speechifying went on so long that Page, chair of a task force convened to consider higher education’s contributions to the economy, just had time to whip through his PowerPoint before Board Chair Linda Cohen thanked him, apologizing that there was no time for discussion.

In fairness, there’s no way the board could have heard Page’s entire report, which was eight months in the making and is only the first step in a three-year effort to make sure Minnesota’s colleges and universities are positioned to help drive economic growth and prosperity.

Convened by the Itasca Project

The task force was convened by the Itasca Project, a long-running effort by some 60 area CEOS, foundation heads and public-sector leaders concerned about the Twin Cities’ quality of life and economic vitality. Like other, similar Itasca efforts, the task force’s recommendations are based on research conducted by the consulting firm McKinsey & Co.

The bottom line: The state’s demand for better-educated workers is growing. By 2018, 70 percent of Minnesota jobs will require post-secondary education.

At the same time, the state’s investment in higher education is falling much faster than the national average. From 2000-2010, state funding for higher ed fell an average of 20 percent nationwide but 35 percent here. 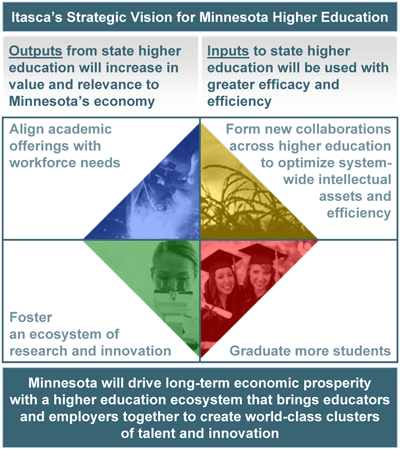 Education has long been an Itasca Project priority, but the current effort became particularly timely last summer, when both the U of M and the Minnesota State Colleges and Universities system (MnSCU) inaugurated a new president and chancellor, respectively.

Eric Kaler and Steven Rosenstone — seemingly possessed of perfectly complementary personalities and skill sets — immediately vowed to work together to ensure that students and taxpayers are getting the most bang for their bucks in terms of work-force preparation, research and development and quality of life.

The two were joined on the task force by Macalester College President Brian Rosenberg, Page, seven other corporate executives and the president of the Initiative Foundation. Another 40 business and civic leaders made up an advisory group to the task force.

Minnesota is well positioned in several ways, the groups found. The state ranks eighth nationally in the percentage of high-school grads who enroll directly in higher ed; the U of M ranks eighth nationally in terms of research and development spending; the state boasts more Fortune 500 companies per capita than any other state, and is home to a number of innovative post-secondary models, including MnSCU.

In an effort to appeal to as diverse a cross section of students as possible, many of the state’s more than 200 post-secondary institutions attempt to provide broad offerings. Closer collaboration and increased cross-enrollment could help to cut down on redundancies, while partnerships can take advantage of different programs’ strengths.

One example: The U of M and MNSCU’s nanotechnology partnership, which allows students access to programs with both applied and theoretical strengths.

Hand in glove with reduced state investment in higher ed, however, has come reduced emphasis on the national level. The United States has the second-highest percentage of adults ages 35-64 holding associate’s degrees or higher; the U.S. rate is the same for 24- to 34-year-olds, but nine other countries now graduate more degree-holders.

Half of those enrolled don’t graduate

Half of all students who enroll in higher ed in Minnesota fail to graduate, for a variety of reasons. Some are not leaving high school with the skills necessary to keep up. Others can’t afford escalating tuition or must work too many hours. 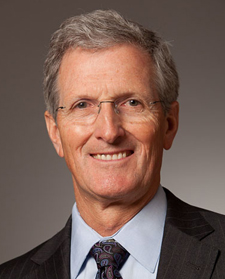 Simultaneously, job creation rates have fallen. In the 1990s, Minnesota’s employment growth outpaced the national average by up to 1 percent. From 2002 to 2010, though, it fell below average.

Degree-holders aren’t the only ones who benefit from a robust higher-ed system, the task force also reported. Compared to states where 23 percent of the population has graduated from college, wages are higher for everyone in states where 38 percent are graduates.

A history of creating change

On a practical level, how does such a broad set of goals and values translate to concrete change? An example from Itasca’s own history is instructional. A decade ago, the organization was instrumental in galvanizing business-community support for early childhood education, then regarded as a social-welfare issue, rather than one of kindergarten preparedness.

Momentum generated by Itasca and others last year finally culminated in the creation of a fledgling state infrastructure to support high-quality pre-K programming.

The group is turning its attention to the appointment of a number of working groups that will begin turning the task force’s recommendations into ground-level programming. Minnesotans can also expect to hear more about the relationship between the economy and higher ed as a strategic communications plan is developed and implemented.

In sum, the regents likely will have plenty more opportunities to hear about the task force’s work.