News
Learning Curve
MinnPost's education reporting is made possible by a grant from the Bush Foundation.
Jan. 17, 2013

This is the second in a series of articles addressing a largely hidden crisis: A decade of social-service cuts and rising poverty have left Minnesota schools — which turn no child away —  struggling to serve a growing number of students whose severe mental-health issues and cognitive disabilities aren’t being addressed anywhere else.

Usually, when school administrators invite elected officials and other luminaries to visit, they haul out the ringers. They walk the senator and his retinue through the advanced-placement engineering classes and the education commissioner the room where outsized gains in achievement are taking place. They show off the master teacher and at least temporarily mannerly kids in spirit wear.

In December, Sandy Lewandowski took two dozen lawmakers, area school board members and education policy types on a tour of two of the facilities in Intermediate District 287, the consortium of west-metro school districts where she is superintendent, and showed them raw, unmet need.

She showed them what school looks like for the students with severe mental illnesses, cognitive disabilities and behavioral disorders. And she talked about how educators do their jobs when failure — expulsion, juvenile detention, institutionalization and the like — isn’t acceptable.

Lewandowski showed her visitors state-of-the-art security equipment that would make a prison warden drool. She showed them shatterproof glass, spring-loaded doors that can’t be slammed on someone and an electronic locking system.

She showed them footage from the system’s cameras in which students attack one another — sometimes with weapons or furniture. The images show teachers and aides, equipped with Nextel-style communication devices, quelling the eruptions with the choreographed precision of a SWAT team.

She showed them how the walls in District 287’s crown jewel, its brand-new North Education Center, in New Hope, can be popped out of tracks and reconfigured to accommodate the constantly changing needs of its unique student body — needs so specific or intense that they cannot be met in students’ home districts.

And she probably answered questions about the difference between a psychiatric diagnosis and a special education one by explaining that an outsized proportion of her students have both.

She showed them classrooms where single students work with more than one educator, classrooms equipped with softly lit calming chambers and where swings for kids who need constant motion hang from ceilings. In the process, Lewandowski illustrated why an agency like hers — a service-sharing co-op, essentially — is a cost-effective way to educate the most challenged learners.

Lewandowski showed the guests the cul-de-sac where buses arrive from 287’s 12 member districts and explained that the programs’ specialized expertise has been tapped by 100 Minnesota districts. There were probably police cars in the adjacent lot, and maybe even one of the ambulances that are called when an acute mental-health crisis means a trip to the ER.

If there was, Lewandowski probably explained that because of a lack of community-based services the student who was being sent to the hospital was likely to be back in school the next day — maybe after an evening’s exposure to drugs, gangs or family distress.

She talked about the enormous expenses involved. How the cost associated with individual students’ educational needs alone frequently tops $40,000 a year and sometimes $100,000.  About how transporting one incredibly challenged child across the metro area and back every day with a driver and an aide costs $85,000. And how injuries to staff by violent student outbursts caused a 104 percent increase in worker’s comp premiums.

In the past, administrators and teachers in programs like these have been reluctant to talk publicly about their students. Where others see deficits and behaviors, they see needs and symptoms. They are fiercely protective of their kids’ privacy and dignity and all too aware that the enormous costs associated with their right to an education made them convenient political targets.

Lewandowski talks to visitors about her success stories, too. But to the uninitiated, hearing those — and truly taking them in — can require a little education.

Two years ago a student in one of District 287’s programs sexually assaulted a teacher. It was a watershed moment for Lewandowski, who concluded it was time to start talking about some unpalatable truths. (MinnPost was invited to visit and learn; the first installment of a series of stories about the challenges ran in this space Monday.)

She has a legal obligation to provide both an equitable education to all comers and a safe workplace for her staff. District leaders have a wealth of knowledge about how to meet the unmet needs of their diverse students, but safety issues and swelling enrollment threaten to overwhelm their best efforts.

Lewandowski prepared a presentation about the juncture, which she calls the Tipping Point, and began asking for help. Earlier this week, lawmakers began hearing from her staff and other advocates for children struggling with mental-health and cognitive disabilities. Money tops the list, but there are a number of policy reforms that would provide immediate relief, too.

Not all of the changes that have pushed Minnesota schools to the tipping point have been bad ones. Increased scrutiny over schools’ use of prone restraints and seclusion has been a step forward. An increased focus on increasing Minnesota’s high-school graduation rate and reducing the “prison-to-school pipeline” has driven the creation of alternatives, many of them funded by state grants, to juvenile detention and suspension. 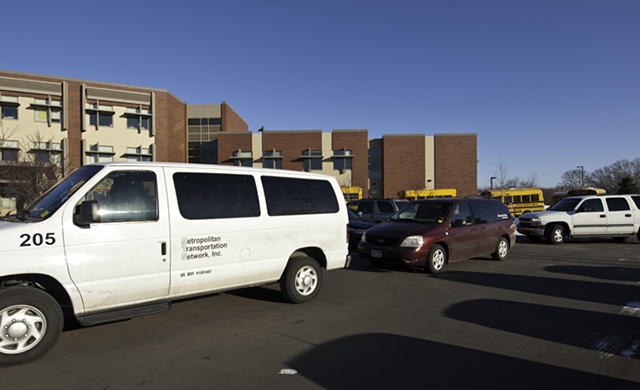 MinnPost photo by Bill KelleyTransporting one incredibly challenged child across the metro area and back every day with a driver and an aide costs $85,000.

Driven by cuts in state funding, a dramatic reduction in out-of-home placements — 40 percent between 2008 and 2009 in Hennepin County alone — has been a mixed bag. While residential treatment has not proven terribly effective in treating kids in the long term, it is effective at providing a child in crisis with a safe, stable haven.

No new programming has arisen to take the place of these services. Instead the needs have been shifted onto the “payers of last resort”: schools. At the same time, administrators have a growing body of evidence that student needs can effectively be addressed by inviting service providers into the schools.

In 2007, the state Legislature created a grant program administered by the Department of Human Services to pay for “school-linked” mental-health services. Participants can use the money, as well as reimbursement captured from insurers, to pay for on-site psychiatric consultation, medication management, psychologists and school resource workers, among other things.

Since the first grants were made [PDF] in July 2008, more than 12,000 youth ages birth to 21 statewide have gained access to mental-health services, 53 percent for the first time. More than half of those were found to have a series emotional disorder. Many insured students had not previously been treated because they could not afford co-pays or other associated costs. Many are unable to get to appointments.

Seeking a doubling of grant money

District 287 and the other intermediates, the National Alliance for the Mentally Ill (NAMI) and the Association of Metropolitan School Districts (AMSD), are among those asking the Legislature to double the amount of grant money. The $5 million increase, they argue persuasively, is a drop in the bucket compared to the financial strain of coping with untreated students.

“That’s really the centerpiece of our request,” says Scott Croonquist, executive director of AMSD. “It would enable us to do so much.”

Also on their wish list: At least the reform, of not the full funding, of the state’s badly broken special-ed funding formula and an increase in the statewide Safe Schools levy, which pays for many of the resources administrators need to keep students secure.

About those culturally specific mental-health professionals: Minnesota is home to just 20 African-American licensed psychologists, according to testimony about the tipping point lawmakers heard Tuesday.

Only 10 of them work with children, and several of those are reaching an age where they are considering moving back to their families’ home states to care for aging parents. They are further stretched because they are frequently called on to treat children of color of other races and ethnicities.

AMSD, whose members include the intermediate districts, also has a longer legislative wish list of its own. But its leaders have been working hard to educate policymakers about the scope of the need and the precarious state of affairs. In November, the group dedicated its entire annual conference to the issue.

What about the notion that it’s throwing good money after bad to spend tens of thousands of dollars a year on youth whose disabilities are profound and lifelong or whose violent actions toward others have had serious consequences? How can Lewandowski and her fellow advocates vault that political and conceptual hurdle?

For starters, they note that federal law requires them to school everyone. Indeed, a body of case law dictates that even when a student’s disability is so severe they likely cannot learn or even if they are in a coma, schools must provide educational services. It’s a mandate they fully embrace as humane.

And the alternatives are Draconian. If Lewandowski expelled the student who sexually assaulted their teacher and the student ended up in long-term juvenile detention, for instance, he or she would still attend a District 287 program — just in the Hennepin County Home School and with greatly diminished prospects.

But more important, there are success stories. Which, with the doors finally and reluctantly open to public scrutiny, can be told.

Leroy (not his real name) was referred to 287’s South Educational Center last year. It was early in his freshman year of high school and already he’d cycled through five other schools. He had been deemed in need of the most restrictive level of special-education services but his family refused them, mistrustful.

Swearing and gesturing at the staff, he was intimidating, recalls Principal Jayne Tiedemann. “Everyone was afraid of him right off the bat,” she says. “He said to me right away, ‘I know how this is going to go. You’re going to send me away just like everyone else.’ ”

Leroy was exceptionally sensitive and very smart, as well as wholly unable to modulate his own emotions. He fought with other students and with the school security officer.

A kitbag of strategies and supports have made a huge difference in Leroy’s ability to do something besides explode. “When he has a problem he self-suspends,” says Tiedemann. “He goes home for a day and becomes very reflective. And then he comes back.

“When he says he needs space, he’s serious,” she adds. “He wants to help you help him.”

The first half of this year, she adds, beaming, Leroy passed all of his classes. If he stays in school, there’s no reason to think his seemingly small victories won’t add up to big change.