News
Learning Curve
MinnPost’s education reporting is made possible by a grant from the Bush Foundation.
April 18, 2013

Ah, Minnesota Legislature, what cynics you’ve turned all of us out here in the cheap seats into. We expect nothing but skullduggery in the frenetic, mid-session hours when lawmakers are marking up their omnibus bills — the umbrella measures they will send to the full House of Representatives or Senate for a vote.

The idea that you might metaphorically put the myriad separate proposals on the table up on a big whiteboard and see an opportunity for making the whole more than the sum of the parts? You could knock us over with a feather.

A week ago, the House’s proposed omnibus education policy and finance bills were essentially wish lists for new revenue and the first places to spend it. Unanswered: how lawmakers would prove Minnesotans would get value in exchange for those politically risky tax hikes.

During markup, chocolate met peanut butter. In separate interviews yesterday, neither man could stop raving about the synergy underlying the party’s proposal — which finally seems more like a master plan than a bucket of proposed spending targets.

Earlier this week there was a little tepid grumbling about one portion of the package, but it died down quickly. Unless their colleagues on Ways and Means tinker with their divine design, when the full House takes up HF 630 — which could happen as early as Saturday — on page 50 they will find a modest little brainstorm called “The World’s Best Workforce.”

It commits the state to achieving universal literacy by third grade, a 100 percent high-school graduation rate and wholesale college- and career-readiness. To get there, every school district in the state would have to hold an annual public meeting, at which it would report its progress toward closing the achievement gap, and set interim goals for the next year.

In keeping with shift from a focus on compliance to one of technical support, the Minnesota Department of Education (MDE) would provide coaching via a network of new Centers of Regional Excellence. The centers would be on call to help schools implement an array of strategies shown to work to bring the most challenged students up to speed.

Schools and districts can craft their own plans for meeting the goals, but they had better take the exercise seriously. Those that don’t show progress will have to give up to 4 percent of their funding to MDE to pay for more intensive support services.

Think this is starting to sound a whole lot like the reviled No Child Left Behind? Think again, said Mariani and Marquart, who nonetheless are optimistic that the outcomes and accountability elements might hold some bipartisan appeal.

“Best Workforce,” they argue, is less prescriptive than the Obama administration’s signature Race to the Top initiative, builds on accountability mechanisms Education Commissioner Brenda Cassellius herself successfully proposed to the feds and gives their colleagues a fighting chance of convincing voters that creating new revenue — aka raising taxes — won’t just throw good money after bad. 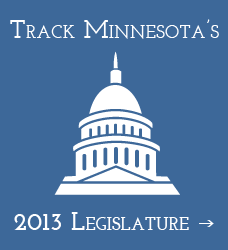 How did it come about? A year ago, Mariani was hopping up and down, trying to get the House GOP leadership to give a hearing to the Integration Revenue Task Force, a panel he served on that was asked to look at reforming the state’s desegregation policy and the mechanism for funding associated activities.

Long hostile to the program, Republican lawmakers had appointed half the group’s members, who they expected would declare it a waste. After hearing from dozens of witnesses about the benefits of integration, the panel instead drafted a new system that more closely tied the money to outcomes. Its recommendations received only a cursory, end-of-session hearing.

No surprise: Mariani, his Senate counterpart Patricia Torres-Ray, DFL-Minneapolis, and Gov. Mark Dayton all included the reformed integration program in their proposals this session.

Marquart, meanwhile, was looking for ways to tie new appropriations to outcomes.

“He looked at our Integration Revenue proposal and said, ‘You know, there’s a good framework here,’ ” Mariani recalled. “I had to smile. In the task force I made the observation that I want to recognize it’s nice we’re recognizing integration, but we’re also appropriating billions of dollars.”

Higher outcomes for all

A DFL outlier on education policy in recent years, Mariani believed that closing the achievement gap would not happen without higher outcomes for all Minnesota students. Marquart, he concluded immediately, was right.

At the same time, as the House member most willing to buck party lines on education matters, he was concerned that like NCLB, past top-down efforts aimed at ensuring accountability were used punitively to punish public education.

“The question is, what happens when we have an administration that doesn’t like public education?” he said. “It’s not a sustainable tool unless you put it in the statute and unless you give the Legislature a role.”

A final consideration: Other states have strong education departments that step in forcefully when districts are underperforming. Minnesota favors local control.

The integration proposal resolved this by allowing districts to use state aid to desegregate and accelerate achievement however they saw fit — provided they can show it’s happening. Why not adopt this approach to other policies in the bill, Marquart asked Mariani?

“We don’t want to be heavy-handed,” Mariani explained. “We are requiring districts to develop plans — in public — and to report them out. But they’re their plans, not the state’s plan. So we could have several hundred plans.”

With chocolate on one man’s peanut butter and peanut butter on the other’s chocolate, the rest of the package fell into place. High-quality early childhood education scholarships will help needy kids get ready for kindergarten; full funding for all-day K will keep those gains from being lost; and a focus on early literacy will narrow the gap that begins to yawn wide at third grade.

Individual proposals aimed at all three were already on the House and Senate’s wish lists, as was the elimination of the state’s high school exit GRAD tests, to be replaced by a program that checks in on students’ progress toward college- and career-readiness with ACT prep starting in middle school.

And it complements some of commissioner Cassellius’ signature efforts, including the dramatic expansion of access for low-income students to challenging offerings like Advanced Placement and the creation of Regional Centers of Excellence to help smaller districts implement winning strategies.

Among them are the recruitment and retention of a diverse teacher corps and the use of formative assessments, the real-time quizzes that odds-beating schools use to find out whether every pupil has grasped one lesson before moving on to the next.

For his part, Marquart was similarly enthusiastic. Faced with demographers’ projections that Minnesota’s work force would not grow as baby boomers retire over the next 10-plus years, he believed expanding the state’s economy meant figuring out how to increase individual productivity.

In February, he held town hall meetings in Greater Minnesota seeking to answer the question, what would it take to build the world’s best work force? Mariani’s wish list resonated: “When he came out with his policy bill, there was not one thing on it I changed.”

Will the Odd Couple carry the day? Badly bruised by 10 years of funding cuts and NCLB’s financial sanctions, Minnesota’s school leaders aren’t crazy about a new law that would take money from underperformers and hand it to MDE.

“That has nothing to do with the current commissioner; 4 percent is a significant percentage of funding,” said Scott Croonquist, executive director of the Association of Metropolitan School Districts. “Other than that, it’s commendable.”

As for House Republicans, so far major pushback has been limited to questions about the proposal’s teeth. Can DFLers guarantee they will meet that 2027 goal, Belle Plaine Rep. Kelby Woodard wanted to know.