News
Learning Curve
MinnPost’s education reporting is made possible by a grant from the Bush Foundation.
July 16, 2013

Pity Arne Duncan. No matter the news he’s come to share, whenever the U.S. secretary of education sets foot in Minnesota he’s somehow upstaged by a local.

In Bloomington Tuesday morning to promote a White House proposal that could funnel nearly $39 million to Minnesota preschoolers, Duncan drew a capacity crowd of educators and policymakers to Kennedy High School.

The brand-new director of Minnesota’s relatively new Office of Early Learning, Melvin Carter, stole the secretary’s show and had members of a VIP panel — including the governor — eating out of his hand.

When Duncan made a joke about President Barack Obama giving a summertime audience permission to lose their suit coats, Carter whipped his off with a flourish. Panelists and audience members alike cracked up.

Displaying an understanding of Minnesota’s pre-K landscape that clearly predates his May appointment as the state’s early-ed czar, the former St. Paul City Council member made sure his guests looked good in front of Duncan by serving them dead-on follow-up questions.

At the very least, Duncan is likely to leave town assured that Minnesota’s efforts to steer low-income children to high-quality kindergarten readiness programs are in high gear.

Preschool for All proposal

Duncan’s visit was intended to tout a White House proposal to create Preschool for All, “a new partnership with states that would provide universal, high-quality, full-day preschool for 4-year-olds from low- and moderate-income families, up to 200 percent of the poverty line.”

Obama has proposed spending $75 billion on high-quality, universal preschool for 4-year olds. In the program’s first year, Minnesota would be in line for nearly $39 million [PDF] in new federal funds. With $4 million in matching state funds, the money would serve an additional 4,736 preschoolers out of the gate.

“There’s a waiting list of 30,000 children here in Minnesota who do not have care,” Duncan told a capacity crowd gathered in the high school cafeteria. “The average poor child starts kindergarten at 5 already a year to 14 months behind.”

State is poised to deliver

Carter’s presence as surprise host was just one indicator that Minnesota’s focus over the last three years on early childhood education has created a state apparatus that’s poised to move kids off of that waiting list and into programs that deliver results. 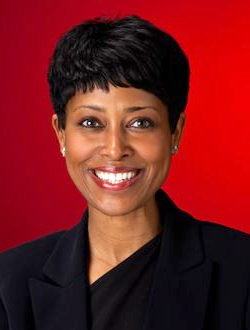 Following a decade in which pre-K advocates struggled to reframe the issue from one of social welfare to one of kindergarten readiness, Dayton’s administration has made early ed a top priority. In addition to creating the institutional “home” Carter recently took over, the governor and state Department of Education have instituted a model system to steer fragile preschoolers to the most effective services.

“This is a huge day for kids, a huge day for Minnesota,” said Commissioner of Education Brenda Cassellius. “There’s nothing better to a teacher than a child who is ready to learn. It’s like gold.”

Cassellius credited her own childhood experience with Head Start as part of her success. “Growing up a poor young girl, this gave me the leg up I needed,” she said. “Personally it made a huge difference to me, to my trajectory.”

The other “Head Start baby” on the panel, Target President of Community Relations Laysha Ward, agreed: “I think Brenda and I are examples of what early childhood ed can accomplish.”

Economist Art Rolnick, now at the University of Minnesota’s Humphrey School of Public Policy, supplied details about high quality early ed’s up to 16-to-one “return on investment” for taxpayers.

The presidential pre-K proposal comes as Congress begins yet another effort to end a partisan standoff that has generated years of delays in the overhaul of the country’s chief education reform law, No Child Left Behind. Duncan’s response to the gridlock has been to work directly with states and most recently school districts to move ahead with a patchwork of ideas that, ultimately successful or not, have failed to constitute a comprehensive education policy. 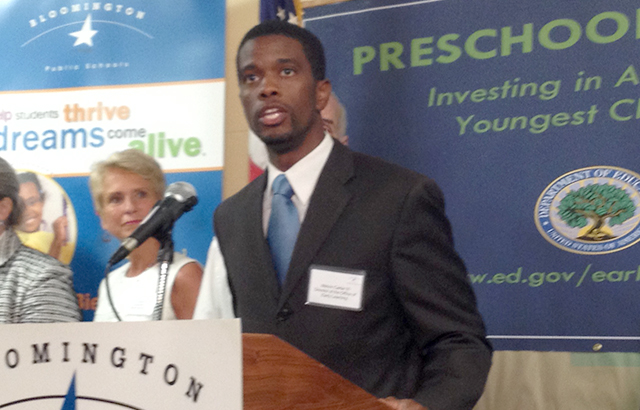 MinnPost photo by Beth HawkinsOffice of Early Learning director Melvin Carter III speaks during a post-panel press conference.
At a press conference after the panel, Duncan supplied few details about Preschool for All. In response to questions about where Obama would get the money, he suggested a .94 cent a pack cigarette tax would generate more than enough money, but added that the important thing was the administration’s commitment to the idea.

Nor would the secretary go into detail about how the “partnership” with states would work. “We want our money to be as flexible as possible,” he said. “The bottom line is we need to be serving a lot more children.”

In recent months fissures have appeared in Minnesota’s formerly tight-knit community of early-ed advocates. With actual dollars on the table in the recent legislative session, some lobbied to steer the money to existing school districts, which could expand or create preschool programs. Others were frustrated that years of effort to identify high-quality standalone programs and figure out how to move needy families into them would end up sharing the modest funding with the K-12 system.

White House materials about the proposal do little to say whether it would shore up either approach — or both. “Funding would be provided to states and distributed to local school districts, or local school districts in partnership with other early learning providers, to offer high-quality preschool programs,” a release explains.

In addition to new money for universal preschool for 4-year-olds, the proposal would support other early-ed efforts under way here and in other states, according to U.S. Department of Education materials.

An additional $750 million would provide for competitive grants to states to strengthen their early learning systems, and $1.4 billion in competitive Early Head Start-Child Care Partnership grants would expand the supply of programs for kids under 4.

Also in the proposal is $15 billion to extend and expand voluntary home visiting programs over 10 years. Minnesota could receive $7.4 million to extend more services to the almost 16,000 low-income mothers who give birth each year.

“It’s the best investment we can make as a nation,” said Duncan. “We have to level the playing field and we have to do it together.”

Arne Duncan promotes Preschool for All to close ‘opportunity gap’