News
Learning Curve
MinnPost’s education reporting is made possible by a grant from the Bush Foundation.
Sept. 25, 2013

In its first year in existence, Minneapolis College Prep (MCP) did the seemingly impossible. The new north Minneapolis high school welcomed a class of freshmen who were up to five grades behind and ended the year with 90 percent of them ready for 10th grade.

Even though all were impoverished, 40 percent learning English and 16 percent receiving special-education services, MCP’s students made more than two years’ growth last year on average. All but two are back this year as sophomores.

Normally, results like those would generate buzz, which would translate into a waiting list of families desperate to get in. This year, however, MCP is struggling to enroll enough students to provide the programming that delivered the gains.

The plan was to start this year with 125 students in two grades. But right now, just 90 are enrolled. Unless the cavalry arrives — most urgently in the form of some stopgap funding — it will be hard to sustain the programming that got last year’s stellar results.

The reasons MCP’s leaders hear for why parents are opting for lower-performing programs elsewhere: The school doesn’t offer sports, parents in the area frequently believe suburban schools are intrinsically better and fear and confusion caused by the early summer closure of another north side charter school known by a similar acronym.

‘Looking to make a paradigm shift’

“We are looking to make a paradigm shift happen in this community,” explained Principal James Barnett, who has spent a lot of time talking to families in recent months in an effort to understand the disconnects. “We have to help parents really understand how to consider school.”

“Their academic results are excellent,” said Associate Superintendent Sara Paul, who noted that MCP met every single performance indicator on its district-authorized startup plan. “The whole fact that we have our partnership with them is based on what’s best for students.”

Modeled on a successful network of rigorous, disciplined schools in Chicago, MCP pushes students to come to see college as an automatic next step and prepares them to flourish there. It has longer school days and years, and a “no-excuses” culture.

It’s a variation on a combination of attitudes and supports that has helped fill classrooms at schools like MCP’s neighbor, Harvest Prep. And has driven others, like Hiawatha Leadership Academies on the south side, to attract enough students to accelerate plans to open new programs. But the first few years can be a grind for school leaders.

In Minnesota, state funding follows students. So MCP, a public charter, gets essentially the same per-pupil allocation as any other school with a comparable population.

Unlike a high school in a district, however, it can’t move students and teachers around from one building to another to compensate for ups and downs in enrollment. The missing 35 students make up more than a fourth of projected enrollment, and you can’t operate a school with 75 percent of the necessary staff.

Plus, to help struggling kids get up to grade level, MCP doubles instruction in math and English. That extra programming requires two extra teachers at a combined cost of at least $100,000.

When Russell Mosley, chair of the MCP board, and his team were planning MCP’s opening, they knew not offering team sports would be an issue — particularly in a part of the city where athletics has often been the lone reason to brag about your high school.

“As a kid, a lot of my success came from basketball,” said Mosley. “That engaged the part of my personality that made me want to do well.”

But MCP couldn’t afford it. Nor could its first class provide the critical mass required to build teams: The first year the school drew only 50 students, not the hoped-for 75.

Of this year’s 150 applicants, 25 — almost all African-American males — did not follow through on enrollment because of the lack of sports.

Open to partnering for sports

Now, if there were money MCP could partner with another local school to offer sports. Minneapolis Public Schools (MPS) has indicated it would be open to this.

The second thing Barnett and Mosley have heard as they have shown up at everything from middle-school graduations to community celebrations to talk up the program is that at least in north Minneapolis, lots of people believe their kids are better off in schools in first-ring suburbs.

Many of those schools post higher overall performance ratings, but fare abysmally with low-income minorities — a distinction that Barnett believes is not clear to parents. Large numbers of north Minneapolis students are open-enrolled into Robbinsdale schools, for instance.

Its Armstrong High School boasts an 82 percent graduation rate overall, but only 26 percent of African-American students score proficient in reading and math. That’s a little higher than its MPS neighbors, but not much.

When Barnett tries to talk these numbers through with parents, several things jump out. First, The Choice is Yours, a program to bus poor Minneapolis kids to suburban schools, has positioned suburban schools as better. And, in fairness, they were often higher quality alternatives 12 years ago when the program, part of the settlement of an educational adequacy suit filed by the NAACP, was created.

Second, the greater availability of student achievement data has trained parents to look at schools’ overall performance, but not how subgroups fare. And proficiency — the numbers reported now — is a much lower bar than the level of achievement that predicts success in college. 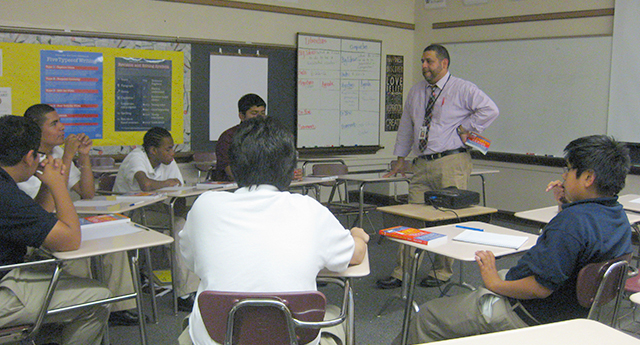 Courtesy of Minneapolis College Preparatory SchoolOf this year’s 150 applicants, 25 did not follow through on enrollment because of the lack of sports.

More bad luck for MCP: Ninth-graders don’t take the Minnesota Comprehensive Assessments, the standardized tests reported to the community. And because the school is just one year old, there are no year-over-year results to report, either.

So visitors to the state Department of Education website, which has a parent-friendly school-quality database, will not find MCP, much less compelling evidence to take a chance on it.

Barnett’s numbers showing success are from assessments geared toward the ACT college-admissions exams. They can show where student is on the path to being prepared for admission into college in general, or into a particular, selective school.

MCP’s 2012-2013 students started the year two points behind the 14-point minimum where college ninth-graders should score on the ACT English test. They ended the year at 14.5 — almost two and a half years’ progress. They were behind on math, reading and science, but catching up almost as fast.

The plan is to have each and every one take a couple of college-level courses by graduation. In addition to allowing a little leeway during their university years, they’re more likely to see themselves as capable of graduating.

Barnett understands this firsthand. His family moved from Chicago to MPS’ north Minneapolis neighborhood when he was in the fifth grade. By the eighth, he had developed some behavioral problems and ended up in a small, now-defunct charter.

There he came to the attention of an English teacher who finagled him admission and a scholarship to Minnehaha Academy. With expectations ramped up, he made an about-face.

“The social pressure, to be smart, to move toward graduation … it really shaped my perspective,” he recalls. “This” — MCP — “is essentially a private school for free.”

Except almost no one knows it. The enrollment coup de grace came in July. MCP had 75 applications for this fall when MPS terminated the lease on the building that housed Minneapolis School of Science, a district-chartered school embroiled in several controversies.

Mosley and Barnett started hearing a third deal-breaker: How do we know you will stay open? “It changed everything,” Mosley said. “It brought our enrollment to a halt.”

And so MCP is simultaneously stumping for financial support and reaching out now to next year’s potential ninth-graders. Barnett and teachers are even canvassing nearby neighborhoods with students in tow, hoping that their work speaks for itself.

“How do you educate and show that hope does exist?” said Mosley. “Right now, what we’re really selling to our families is hope and accountability.”