News
Learning Curve
MinnPost’s education reporting is made possible by a grant from the Bush Foundation.
Sept. 26, 2013 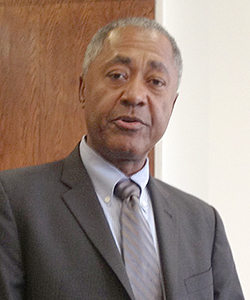 Standing with a coalition of community leaders, Minneapolis City Council member and mayoral hopeful Don Samuels Wednesday decried the decision by the city’s teachers union to close contract negotiations to the public.

“As I’ve been saying for some time, it’s Minnesota Nice until the negotiations begin around Minneapolis Public Schools (MPS),” said Samuels. “And now we are seeing tactics that are not Minnesota Nice.”

The community leaders standing with Samuels, many of them members of the African American Leadership Forum and the Minnesota Council of Black Churches, called on officials of the Minneapolis Federation of Teachers (MFT) to meet with them at the “safe space” where they held the press conference, Greater Friendship Missionary Baptist Church in south Minneapolis.

MFT President Lynn Nordgren did not immediately have a comment. Under Minnesota law, either party has the right to ask to enter mediation and to close the proceedings. The St. Paul Public Schools last week asked to take its contract talks into mediation.

MPS Superintendent Bernadeia Johnson Monday announced that the union had petitioned state mediators to close ongoing contract talks to the public. The district has asked the union for a series of changes that would enable the city’s 25 lowest-performing schools to import practices that have closed the achievement gap in other schools.

“No one here needs a reminder that Minnesota has some of the worst educational outcomes for kids of color,” Samuels said. “The people deserve a seat at the table. The people deserve to know each side’s position on every issue in the negotiations.”

“I am very deeply concerned, and as a matter of fact, outraged,” said Billy Russell, Friendship’s pastor and a longtime education advocate. “We are at a point where we cannot let the MFT close us out again.”

In May, Johnson announced “Shift,” a plan to free 20 percent to 30 percent of schools from a number of district rules and contract provisions in exchange for greater accountability. The plan would require the union to agree to staffing flexibility, longer school days and other changes the MFT has resisted during past negotiations.

Because the last two rounds of talks have also been closed at the union’s request, the public has had to rely on the eventual release of audio tapes of the sessions to evaluate each side’s characterizations of the progress or lack thereof. Because the release can be delayed for a number of reasons, advocates who have been attending the open sessions for years only recently began listening to the 2012 round, in which the district got a fraction of the changes asked for.

In her statement Monday, Johnson expressed frustration that the issues raised by the union during the first few months of talks were not pertinent to the contract. The talks were just beginning to get to substantive matters, she said.

“MFT has been discussing policy items that are not contract negotiable nor focused exclusively on teaching, such as ‘The Power of Play’ and ‘Parent, Family and Community Partnerships,’” she said. “MPS is focused on four key strategies that will help the district Shift to where we need to be to meet the learning needs of 21st century learners: staffing flexibility, teacher quality, strengthening high-priority schools and increased time for students and teachers.”

‘We know what works’

Samuels has previously thrown his support behind the Shift proposal, but he elaborated at Wednesday’s event. “At the African American Leadership Forum (AALF) we sat around for years trying to figure out why our schools were not succeeding and what it would take to turn our schools around,” he said.

Among other things, some participants founded the Hope Collaborative, which brought leaders from the nation’s 10 top-performing low-income schools to the Twin Cities to talk about the factors behind their success.

“The superintendent is talking about things we’ve been talking about for years,” he said. “We know what works and Shift has those components.” 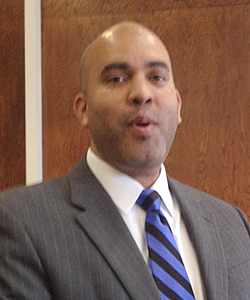 Asked by MinnPost about the law that allows the unilateral closure of contract talks, St. Cloud School Board member Jerry von Korff said that the privacy sometimes allows one side to find a way to agree to something controversial.

It’s effective, in his experience, for the district to tell the mediator that it intends to continue communicating with the public and will take pains to do so in a way that is not inflammatory. Union leaders, he noted, continue to communicate with their members.

Co-Chair of the Council of Black Churches Bill English, who has also sat through past rounds of talks, praised Johnson’s statement opposing the closure as clear and direct.

“There are things that are good for kids that they don’t want to talk about in public,” said Chris Stewart, director of AALF and one of the people who has monitored the talks in person. “We are asking the MFT to bring themselves to the table with community members. Sit with us and figure this thing out.”