News
Learning Curve
MinnPost’s education reporting is made possible by a grant from the Bush Foundation.
Oct. 9, 2013

The number of predominantly white charter schools in increasingly diverse Twin Cities suburbs grew by 40 percent over the last five years, according to a report just released by University of Minnesota researchers.

The survey, conducted by the U of M Law School’s Institute on Metropolitan Opportunity (IMO), is the third since 2008 to find segregation throughout the charter sector on the rise. More than half of the 129 charter schools in operation during the 2012-2013 school year were predominantly nonwhite, while 40 were predominantly white. Just 21 qualified as integrated.

Several of the mostly white programs are located in communities that recently lived through racially charged controversies as they attempted to redraw school attendance boundaries to achieve balance. Whether by intent or not, said Myron Orfield, director of the former Institute on Race and Poverty, the programs facilitate white flight from increasingly diverse traditional schools in the suburbs.

“They’re having a profound effect on public policy in the districts where they’re located,” said Orfield. Leaders in Eden Prairie, Osseo, Bloomington and Apple Valley have struggled to keep families who don’t like the new attendance maps.

State has history of ambivalence toward integration

Segregation in charter schools has been a long-simmering issue in Minnesota, which has a history of ambivalence toward integration in education in general. As affluent whites moved in recent decades to the suburbs, they left behind concentrations of poor children in urban schools.

As the impoverished mainline public schools faltered, large numbers of minority families turned to charters and to suburban schools, either via open enrollment or by moving altogether. This made traditional suburban schools more diverse.

In 2001, Orfield and Thomas F. Luce Jr. report, “white charter students were actually less likely then to be in a predominantly white school than their traditional counterparts — 56 percent compared to 81 percent. However, by 2012-2013, the share of white charter students in predominantly white schools had risen to 73 percent while it declined to 53 percent in traditional schools.”

Percentage of students in segregated school settings by race and school type, 2000–2013 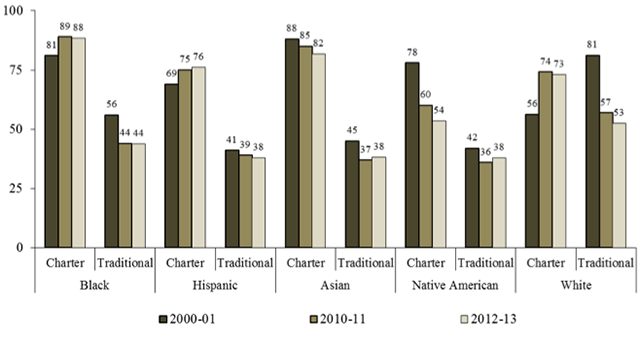 Source: Institute on Metropolitan Opportunity/Minnesota Department of Education
By 2012-2013, the share of white charter students in predominantly white schools had risen to 73 percent while it declined to 53 percent in traditional schools.

The predominately white schools in the survey have student bodies that are less than 20 percent minority. They account for two-thirds of suburban charters, vs. 44 percent of suburban mainline public schools. Orfield and Luce defined a predominantly nonwhite school as one where two-thirds of students are minorities.

Five of the mostly white schools are located in communities where school district leaders have come under intense pressure as they attempted to address racial imbalances between schools by redrawing attendance boundaries.

In 2010 and 2011, Eden Prairie endured one divisive meeting after another over a plan to redraw school attendance boundaries to create better socioeconomic balance, among other goals. The plan was adopted, but the contract of the superintendent who insisted on it was bought out the following year.

Families threatened to leave, and many did. It’s not clear how many enrolled in Minnetonka and other neighboring districts and how many left for charters.

Something similar played out in Osseo in 2007 and 2008 when a budget-cutting reorganization moved a working-class magnet into a building that had held a much whiter neighborhood school.

Angry parents voted with their feet. At least 125 students transferred into Wayzata. It’s reasonable to assume that some ended up at a nearby mostly white charter, Beacon Academy, and at Parnassus Preparatory School, which opened in the area in 2011.

Preference only to siblings, employees' children

Of course correlation, famously, does not equal causation. Charter-sector representatives note that right now, state law requires charter schools with open seats to admit anyone who applies. Preference can be given only to siblings and children of employees. If there are more applicants than seats, admissions are decided by lottery.

Because they are “schools of choice,” charters tend to attract families with similar interests and backgrounds. All three predominantly white schools, as well as many of those mentioned in the IMO report, share a “classical” approach that has become exceptionally popular with parents in recent years. All of the schools authorized by Friends of Education, the network that oversees many of the predominantly white schools, have either a core knowledge or classical Trivium philosophy specifying a particular sequence of skills. It’s not an approach targeted to any particular class or culture, however.

The authorizer’s network also includes a number of high-achieving majority-minority “classic” schools, including one that was just placed on the state’s list of schools that get top results, Minneapolis Academy.

When efforts to recruit a diverse entering cohort of students at Parnassus didn’t go well, the authorizer began looking into preferential admissions for low-income students. “We marketed the heck out of it,” said Topoluk, knocking on doors and visiting service agencies and community groups. The school still opened with fewer minorities than the district average. Sibling preference and a surplus of applications has helped keep it that way.

What, if anything, should be done?

Last year at the request of Friends of Education Sen. Terri Bonoff, DFL-Minnetonka, introduced legislation that would allow all charters to give admissions preference to students who are eligible for free and reduced-price lunches. (Race and poverty are tightly correlated in Minnesota.)

Orfield and Luce, longtime charter critics, do not propose a remedy in the new report. They do argue, however, that the existence of charter schools is damaging to Twin Cities students and conventional public schools. Controlling for poverty, the majority perform more poorly than their traditional counterparts. 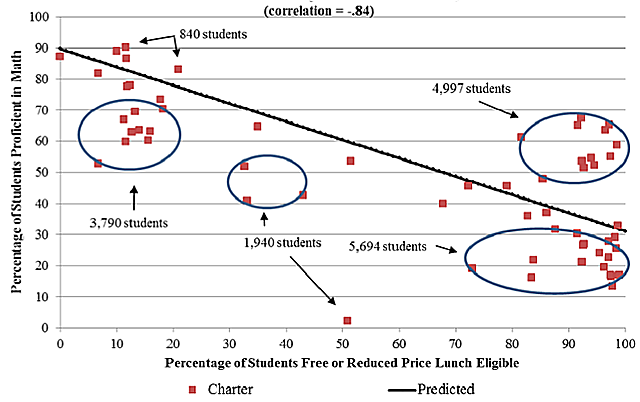 Source: Institute on Metropolitan Opportunity/Minnesota Department of Education
From the report: "Among high-poverty charters, there are 14 percent more students (5,694 versus 4,997) in schools under-performing in math than in the high-performance schools."

Nor are they persuaded by the presence of a cluster of high-performing “odds-beaters” — never mind that this growing group of outliers is also vastly outperforming the vast majority of traditional schools, which have begun studying their successes. The gap-closing schools enroll fewer students than their lower-performing charter brethren, they note, and pose one more avenue through which mainline schools can lose students and resources.

Orfield and Luce argue that The Choice is Yours, a program that allows low-income Minneapolis students to enroll in suburban schools and provides them with transportation, gets better outcomes. Other local education advocates would dispute this.

Charters could be placed under the state’s desegregation rule. This would not create quotas or admissions target, but it would provide carrots and sticks to engage in activities that both promote cross-cultural understanding and close the achievement gap.

When the idea was pushed during the latter years of the last decade, a differently configured charter sector fought the idea — hard, according to former state Rep. Mindy Greiling, DFL-Roseville, former head of the House Education Finance Committee. Many argued that an ethnocentric approach was an important feature of their school, she recalled, while others did not want the bureaucracy.

At Higher Ground Academy in St. Paul, a charter whose students are virtually all Somali or Oromo, school founder Bill Wilson is tired of the debate. Charters are schools of choice, he reminded, and as mostly stand-alone buildings, lack the capacity to move students for balance. His students — who have put the school on U.S. New & World Report lists — get out of their building and get involved with kids of other cultures in scouting activities, Rotary Club leadership camps, a statewide youth in government program and a model United Nations. Higher Ground does this with no integration revenue — it’s not eligible — but it’s an approach that could be replicated.

The preferential-admissions bill didn’t go anywhere in the last, packed legislative session. But it is still alive and can be taken up in early 2014. If so, it would be considered by a Legislature that has already endorsed integration as an end to be valued for its own sake.

Number of mostly white suburban charters has risen by 40% over 5 years, report says