Four score and seven years ago — or maybe it just seems like that long — conspiracy theories about the Gettysburg Address began circulating among education policy wonks.

There’s the one floated by a religious-right group that Minnesota’s new social-studies standards have excised Abraham Lincoln’s seminal speech and other examples of “American Exceptionalism.”

Then there’s the one that says that under a new set of top-down academic standards students will be required to scrutinize its 270 words in a context-less vacuum for clues to its setting and import.

There’s one that says teachers are to be barred from reading it aloud with any inflection at all. One warns of a return to rote memorization, which can be easily assessed on standardized tests. And there’s even one that says that new standards focus on the speech and other seminal “informational texts,” such as the preamble to the Constitution, because they are royalty-free and thus attractive to textbook publishers.

That the Gettysburg Address is the “exemplar” cited in each of the gloomy tales is doubtless a reflection of its status as one of the best-known and most powerful speeches in U.S. history. That the tales are being spun is a reflection of ongoing controversy over how the core values at its heart are taught.

‘It’s about what America needs to be’

“It’s always been a piece of American education,” said Kevin Maijala, manager of curriculum development and teacher education at the Minnesota Historical Society. “It’s a statement. It’s about what America needs to be.”

Maijala was a member of a state task force that created one of two new sets of academic standards designed to put a premium on critical inquiry. Under the state’s new social studies standards, Minnesota students will be pushed to demonstrate an understanding of the pivotal moment marked by the “dedicatory remarks.”

And they can do so in a wide range of ways, he added, such as the creation of timelines noting important Civil War events or by creating exhibit boards.

Or something along the lines of a student writing contest the Historical Society held earlier this year to select four students to travel to Gettysburg in July with the Minnesota Civil War Commemoration Task Force.

Middle- and high-school students were asked to compose a reply to Lincoln describing the import and impact of his speech. They were asked to do so in about 10 sentences — the same brevity that the president limited himself to.

All four wrote letters reflecting on the speech’s call for the nation to reunite around the promise of its founding values, but each had a different perspective on whether Lincoln’s vision has been fulfilled.

“As a historian I much prefer this,” said Maijala. “If you ask four different people what they saw at an event, they are all going to notice different things.”

Another of the texts the new standards encourage scrutinizing, the Declaration of Independence, emancipates the nation from England. But it didn’t emancipate women, American Indians or slaves, he noted: “What’s important about it is different for different people.”

Under a separate set of English language arts standards being adopted throughout the country, students also will be able to discuss the Gettysburg Address as a work of literature.

Adding fuel to the conspiratorial fire: Much of the general public can’t distinguish between a standard — something a student should know at a particular grade level — and curriculum, the lesson plan or text that’s used to teach information that will satisfy a standard.

Four years in the making, the Common Core standards are an effort by 46 states and the District of Columbia to define what core math and English skills K-12 students should have in each grade. The English standards require students to be able to analyze a number of “foundational” American documents, among other readings.

Nearly universally applauded just a year ago, Common Core was a voluntary effort led by U.S. governors. Because the nation’s widely reviled 2001 reform law, No Child Left Behind, placed sanctions on schools that failed to show continuous student progress, some states responded by lowering academic standards.

Concerned both about this uneven playing field and about an accountability system that encouraged “teaching to the test,” the officials behind Common Core wanted a set of rigorous standards that also require skills such as critical thinking and problem-solving.

Critiques from all sides

But as states now move to adopt Common Core, vociferous opposition has sprung up from a number of camps. Liberals and teachers-union leaders have charged that it will only result in more testing. Conservatives have called it a federal curriculum. 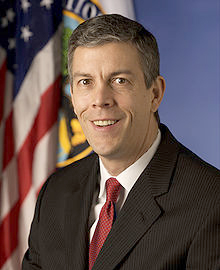 Parents have protested that their kids’ scores are falling on the tests, which are more rigorous than their predecessors in many cases. And some insist that Common Core is part of a strategy to label public schools as failures that should be handed to the private sector for fixing.

On Monday, U.S. Secretary of Education Arne Duncan apologized for remarks he made last week at a gathering of state education superintendents that “white suburban moms” were rebelling against Common Core.

“All of a sudden, their child isn’t as brilliant as they thought they were and their school isn’t quite as good as they thought,” he said, “and that’s pretty scary.”

In a blog post on the U.S. Department of Education, Duncan said he was trying to “encourage a difficult conversation and challenge the underlying assumption that when we talk about the need to improve our nation’s schools, we are only talking about poor minority students in inner cities.”

Finally, because more and more states are requiring teacher evaluations based in part on student performance data, teachers are wary that they will be punished for the drops in scores that typically accompany tougher tests.

Because Minnesota already had higher math benchmarks, it has adopted only Common Core’s English Language Arts standards. The first tests using the new standards were given here last spring.

Also new to Minnesota this year are revised state social-studies standards, rolled out in May after several months of grumbling by a handful of Tea Party legislators and Education Liberty Watch, a small but vocal far-right group that has lobbied against Common Core and state funding of early childhood education, among other issues.

The group protested that the guidelines minimized American accomplishments — including the Gettysburg Address — and focused too much on injustices to American Indians and others. An administrative law judge eventually concluded that the standards were appropriate and reasonable.

Because Minnesota has a school system that defers to local control, it’s up to school districts to decide what curriculum will be used to fulfill the standards and how students will demonstrate mastery. Some may spell out specific readings and require memorization; others are looser.

There are numerous benchmarks in the two sets of standards that a reading of Lincoln’s speech could fulfill, said Beth Aune, director of academic standards and instructional effectiveness for the Minnesota Department of Education. One possibility: To determine an author’s point of view and purpose or to evaluate the author’s use of rhetoric.

Although Lincoln had little formal schooling himself, it’s hard not to imagine he would recognize the stakes. As he said somewhat less famously: “The philosophy of the schoolroom in one generation is the philosophy of government in the next.”