News
Learning Curve
MinnPost's education reporting is made possible by a grant from the Bush Foundation.
Dec. 9, 2013

Show of hands: How many of you remember Willie Horton?

OK, so a few of you are too young. How about Trayvon Martin?

No matter your frame of reference, you’re likely to recognize the strategy at play in the most recent mailing sent out by Better Ed, the education policy wing of the local think tank Intellectual Takeout.

Front and center on the postcard is the business end of a handgun. The hand wrapped around its grip extends out from a shadowy figure in a black hoodie.

“Think about it,” says the headline. “High school dropouts commit 75 percent of crime. Minneapolis Public Schools (MPS) graduates only 50 percent of their students.”

The last two lines — “It’s time to shift. Who’s the roadblock?” — are printed atop the faint outline of a group of picketers, presumably the teachers union. But the main image is so inflammatory the detail is lost.

In fact I had looked at it a dozen times before a friend pointed out that hand was white. I was stunned to realize he’s right. The gunman wears a ski mask, which makes him look dark-skinned, and very, very much like the avatar many people put on Facebook and Twitter when George Zimmerman was acquitted of killing Trayvon Martin.

If you make it that far, the message on the other side essentially is that MPS spends more than St. Paul Public Schools and creates mostly violence. The district’s “Shift” initiative — which has nothing to do with crime or budget-cutting — isn’t mentioned again, nor is its effort to persuade its teachers to agree to contract changes that would facilitate gap-closing strategies.

Do Better Ed’s numbers add up? Depending on how creative one’s accounting is, maybe. But that’s not the point. Did Michael Dukakis free Willie Horton to kill again?

The message under the message

“I just looked at it and I was like, are you serious?” said Nekima Levy-Pounds, a professor at the University of St. Thomas Law School and the director of the Community Justice Project. “They know there’s a racial component whether they articulate it or not. They know that’s the message under the message.”

Back in March I wrote about Better Ed’s first postcard, which had a picture of a doe-eyed Latina child holding a cardboard sign, off-ramp-beggar-style, that said, “I need change, not just more $.” 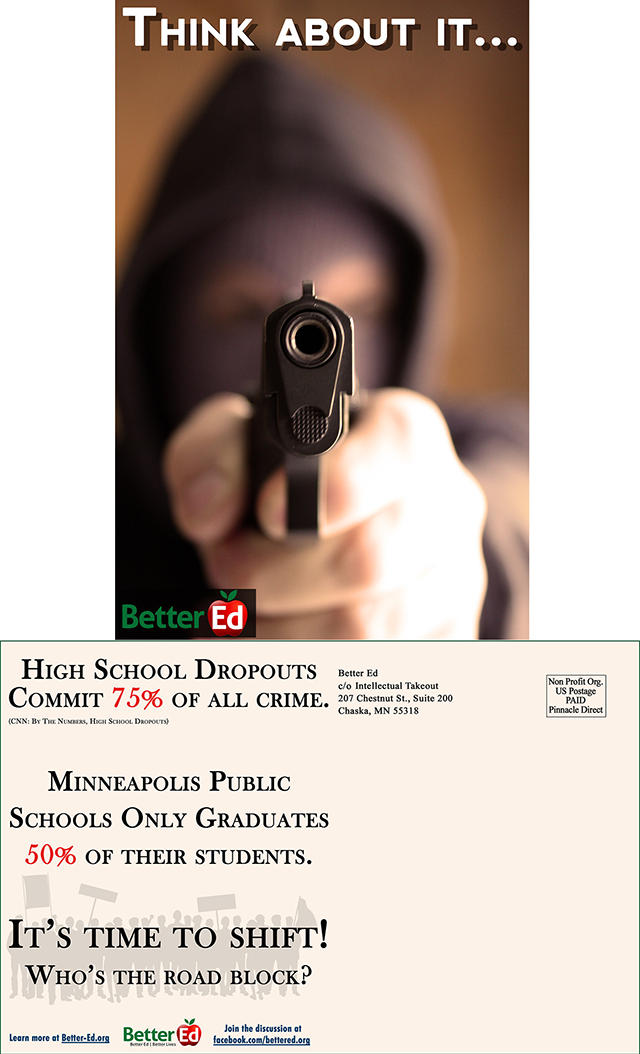 The new postcard was followed by an e-mail bearing the hoodied thug photo as well as text claiming that the “ruffled feathers” that it caused had finally shaken the Twin Cities from complacency and focused attention on the magnitude of the crisis facing MPS schools.

“While we received good feedback, we also received a few e-mails and Facebook messages from people who were shocked and offended by it. Even Mayor [R.T.] Rybak took the time to message us publicly on Facebook, stating:

“‘I believe very strongly that we have an education crisis that needs immediate action. However I did not agree with the direction of the postcard I received from you.’

“Are we surprised that a postcard with an image of a gun would be shocking or disagreeable to some folks? Not at all.

“Are we surprised that some folks wouldn’t like a postcard pointing out that there are correlations between crime and poor educations? Of course not.

“But what is surprising, and sad, is that it took an image of a gun to get more people talking about Minneapolis Public Schools after more than a decade of neglect.”

It took an inflammatory postcard to draw Rybak’s attention to the challenges facing Minneapolis’ schools? The same Rybak who will go to work Jan. 2, the day after he leaves office, for Generation Next, a regional initiative to focus policy efforts and funding on educational programs and strategies that work?

Nor is the correlation between crime and graduation rates an accurate picture, Levy-Pounds added. The crime rate includes some traffic offenses and lots of nonviolent offenses such as writing bad checks.

“They have made a huge leap without providing any evidentiary support for the claims,” she said.

There’s one final bit of truthifying that needs to occur before this post comes to a close. The Better Ed communications include a chart that supposedly shows St. Paul doing more with less.

“We were even more pleased to find the Star Tribune joining us in the comparison! On Sunday, December 1, 2013, the paper published the following chart,” the follow-up e-mail continued.

“Now, there are some differences between the charts due to the time of publishing and some things being left off of either chart, but overall the fact that finally one of the major papers in town is pointing out the shocking difference, too, is fantastic.”

The accompanying link leads to the Star Tribune chart — and to a story that explains, in detail, why St. Paul’s higher graduation rate can’t be equated to dramatically better performance.

But again, the data probably isn’t the point. “They’re preying on people’s fears and stereotypes,” said Levy-Pounds. “It’s important for readers to ask critical questions and not fall into the trap of reinforcing stereotypes about communities of color, and in particular youth.”