News
Learning Curve
MinnPost’s education reporting is made possible by a grant from the Bush Foundation.
Dec. 2, 2013

It’s a puzzle worthy of a dozen middle-schoolers: How do you perch 13 acres of ballpark on an eight-acre parcel of land?

How do you hang — yes, hang — Target Field’s restaurants and skyboxes and player-rehab facilities and broadcasting studios and restrooms from exposed steel beams so that below, bike paths and rail lines and even a creek flow unimpeded?

How do you cantilever — now there’s a vocabulary word for you — a plaza over the interstate that funnels commuters to the office towers soaring above the first base line?

How do you suspend it all — the 41 miles of hot water pipes that keep two acres of grass green all winter, the 15 miles of insulated lines that pipe beer from keg rooms to taps, the 62 miles of concrete-filled steel anchored in the bedrock below — over the working innards of a city?

You use math. Lots and lots of math.

It’s a brilliantly sunny Friday and Joel Moryn, president of Parsons Electric, is touring the Minnesota Twins’ ballpark with a group of seventh-graders from Minneapolis’ Risen Christ School. His firm designed and installed the stadium’s technology.

Also enjoying a return visit is Dave Bice of Bald Eagle Erectors, whose ironworkers built the pedestrian plaza that welcomes stadium visitors, among other features. Each man brought several colleagues — largely women, lest stereotypes about the trades get perpetuated.

All are mentors with a program Risen Christ started four years ago called Imagine the Possibilities. Each set of adults will meet monthly with six of the students for two years, taking field trips and working on projects. The goal is to make tangible the value of graduating from high school and college.

A K-8 school, Risen Christ was founded 20 years ago, an effort by five Twin Cities Roman Catholic parishes to ensure that south Minneapolis would have a thriving Catholic alternative. Virtually all of the student body is impoverished — so much so that the Jimmy John’s that wasn’t polished off before the tour has been wrapped up to go home for dinner. Three-fourths are Latino and half are learning English.

With parents working two and three jobs to make ends meet, these kids aren’t likely to catch a game from the nosebleed seats, much less examine the cleat marks on the heated benches in the dugouts.

But the truth is that unless the kids’ aspirations and opportunities open up, these trades people, too, face a limited future. The schools that used to supply their workers have gone from enrolling 300-400 people per class to training a tenth as many.

Not long ago 90 percent of new, skilled tradesmen were sons following in their fathers’ footsteps. Now they make up 5 percent. And the academic and technical skills the next generations need are increasingly advanced.

“We see can see the cliff coming,” says Moryn. “The retirements are in the hundreds a year.”

Bice nods, adding that their journey’s a steep one. “I grew up like them, real poor,” he says. “I had a lot of opportunities, though, and that helped out.”

The uses of geometry

From the visitors’ dugout, Bice and Moryn direct the students’ attention toward home plate and then up — way up. See those W’s, Bice gestures. Those are the beams that hold up the cantilevered canopy that covers the uppermost deck of seats.

Without geometry, the giant, swooping wings of steel wouldn’t stay up, Moryn adds. Those tan boxes suspended from the underside of the canopy? They’re speakers and they weigh 50 pounds apiece.

“Every one of those speakers is aimed at a particular seat,” Moryn says. “You need geometry to figure out where and how to hang them, and the lights, too, so there are no dead zones or areas where an outfielder will be blinded.” 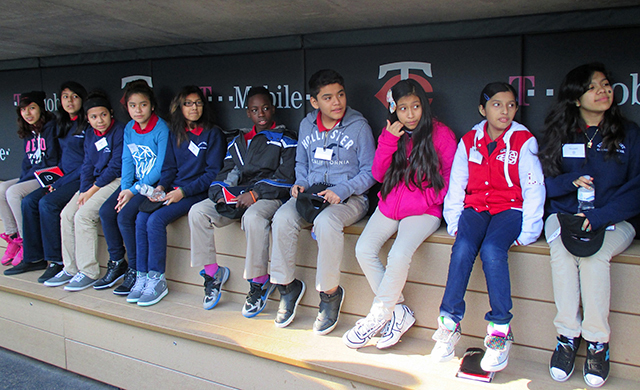 MinnPost photo by Beth HawkinsThe students check out the heated seats in the visitors’ dugout.

Moryn got involved when Risen Christ President Helen Dahlman and Fran Rusciano Murnane, director of advancement, approached Parsons and explained their idea for Imagine the Possibilities. The school was creating a new strategic plan and item number one on Dahlman’s wish list was to make it more of a community school.

“Not all of the things that create the achievement gap can be dealt with during an 8-to-3 day,” says Dahlman. “If [the students] have no experience in their world of college and careers, they don’t know what’s possible. Our parents are hardworking, but they don’t have the experience.”

About half of Risen Christ’s students go on to DeLaSalle or Cristo Rey high schools, the other half to mainline public schools. “Our focus really is how do we make sure our kids are prepared to be accepted at these Catholic college prep schools,” says Dahlman.

Graduation can seem a stretch to their families, as can giving up the income the teens might bring in if they simply took an unskilled job right away.

And with each family’s share of tuition ranging from just $775 to $2,150 per pupil, the school needed fundraising conduits. Armed with a brochure they’d created, Dahlman and Rusciano Murnane literally cold-called businesses that seemed like good fits.

“Mentors become donors,” says Dahlman. “They get engaged. They want to help. They see with their own eyes how bright these kids are and how much they want to learn.”

Approaching the entrepreneurial community was a smart move, says Betsy Buckley, CEO of What Matters, a business leadership and growth consultant and until last week interim president and CEO of the Minneapolis Downtown Council.

“People who choose entrepreneurship usually do so because they see worlds of possibilities,” says Buckley, who first became a program mentor three years ago. “We already have that mindset.”

On the surface, Imagine the Possibilities may look like a business success story giving back, but the mentors benefit, too, Buckley says. Like Moryn and Bice, she, too has an interest in priming the talent pipeline, but being a mentor has forced her to reconsider her jam-packed life.

Last year Buckley gave herself permission to miss an important City Council meeting to spend an entire day downtown with her five mentees, girls all, introducing them to business women in her circle.

They met a classmate who oversees operations for the Timberwolves and the Lynx, looked down over the city from a corner office and talked about what landed its occupant there, and had lunch in a private dining room at the Minneapolis Club. 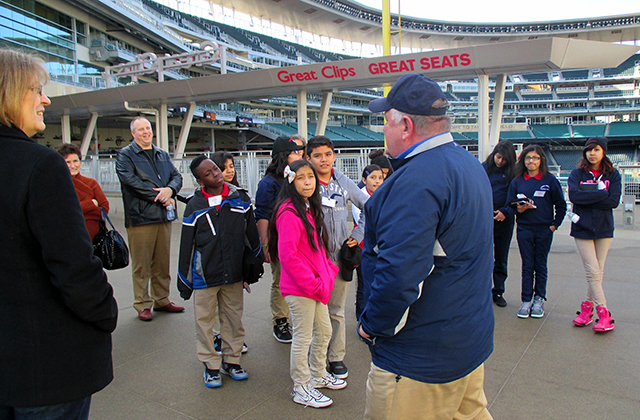 Buckley freely confesses she’s not going to be able to say goodbye at the end of the year. “I already have ideas about their high-school work,” she says. “When you slow down enough to see, you see the impact it’s had on their lives. And you see it really doesn’t take much to have an impact.”

Back at Target Field, Twins usher and tour guide Mike Anderson and Tour Department Team Lead Forrest Brandt are talking about all of the other people who work at the stadium. Anderson is a fount of historic information and — this being baseball — statistics. Brandt has an inborn talent for making even the back-office jobs sound sexy.

From landscapers to social-media specialists

The group looks at work spaces for landscapers and sportswriters, for physical therapists and social-media specialists, for chefs and for the guy who changes the way-up-high light bulbs in the outfield, who turns out to be scared of heights. Mostly awestruck as the afternoon lengthens, the kids think this is hysterical.

In between field trips, students and their mentors meet monthly to work on projects each team designs. Moryn’s group, for instance, is reverse-engineering a bid for the Hall of Fame at the new TCF Bank Stadium at the University of Minnesota.

The students created a business plan, decided what kinds of people should work for their firm and developed a PowerPoint presentation detailing everything, down to the number of light bulbs the hall requires and their cost.

Next year, they’ll tour a construction site and apply their academics to the pouring of concrete. Which site? Maybe, just maybe, the Vikings stadium. You never know what can happen, Moryn smiles, if you dream big and work hard.