News
Learning Curve
MinnPost’s education reporting is made possible by a grant from the Bush Foundation.
Feb. 3, 2014

Minneapolis may be the City of Lakes, but it has a swimming crisis of alarming proportions. It has no public indoor swimming pool where urban youth can learn to swim, and no clear-cut institutional champion of swimming as either a safety issue or a sport.

Minnesota, meanwhile, has the highest drowning rate in the country for African-American youth and the third highest for Native Americans. Drowning is the leading cause of accidental death for African-Americans between ages 5 to 14. They are three times as likely to drown as their white peers.

And that’s not the only aquatic inequity. Over the years, most of the aging, expensive-to-maintain pools Minneapolis Public Schools (MPS) has closed have been in schools in low-income neighborhoods. The two remaining lap pools where swim teams can practice and meet are located in the far southwest and northeast corners of the city.

If students at the more impoverished schools want to swim competitively, they face bus rides of up to two hours a day and lanes crowded with as many as a dozen swimmers at a time.

Funds for a pool overhaul

There’s virtual consensus that the best way to address both problems is to renovate a mothballed indoor pool at the Phillips Community Center on the city’s south side. So much so that two years ago the Legislature passed $1.75 million in bonds to pay for the overhaul, and Hennepin County agreed to put up an additional $350,000.

Would that it were that simple. Unlike, say, an afterschool arts program, pools come with high operating costs. You need capital to build them, and you need a stable source of revenue to justify those construction costs.

“This is a social-justice issue,” said Hannah Lieder, founder of Minneapolis Swims, the nonprofit leading the effort to renovate the pool. “The last four kids to drown in Minneapolis have all been African-American.”

None of the organizations involved in the discussion disagrees. It’s just that if that revenue stream turns out not to be so stable, well, someone’s going to be left holding the bag.

“No one wants to take institutional ownership of it,” said Sen. Jeff Hayden, a Minneapolis DFLer. “I’ve been very frustrated with the process because I feel there is a little bait and switch.” It’s particularly frustrating, he said, going into another legislative bonding cycle with funding for a project that was depicted as “shovel ready” still untouched.

In November, the Minneapolis Park and Recreation Board delivered a formal proposal [PDF] to MPS that outlined three options for renovating the facility. The district has yet to reply. Administrators said they are engaged in internal discussions about the proposal, which must be part of a larger discussion about athletics, extracurricular activities and equity.

“As a district, we believe that there should be equitable access to all kinds of programming throughout the school district,” said MPS Director of Communications Stan Alleyne. “This is more than swimming. We have to look at this in a broader way.”

Bonds, funding could be lost

Advocates for the project are anxious, however. If there is no agreement outlining the construction and operation of the proposed Phillips Aquatic Center by June, the bonds and grant money are off the table.

About a dozen swim team families showed up at the most recent Minneapolis School Board meeting to plead their case. Board members Kim Ellison and Carla Bates asked for the formation of an ad hoc committee to tackle the question.

By way of reply, district leaders asked which of the current priorities should be set aside to make time. Staff should have a recommendation for the board in coming weeks, Alleyne said Thursday.

Four years ago Minneapolis Swims, then a year-old nonprofit, persuaded the Minneapolis Park Board not to fill the dilapidated pool in the Phillips Community Center with concrete.

The Park Board had never operated an indoor pool, and had no interest in doing so. The building, a onetime junior high MPS donated to the parks in 1986, came with a pool. The parks were only too happy to lease it to the Boys and Girls Club, which gave the building back in 2008.

Minneapolis Swims was positive that demand for the pool was there. There are 50 K-12 schools within two miles of the facility. And the city in general is underserved. While St. Paul has a public pool for every 28,000 residents, Minneapolis has one for every 131,000 and just 11 public indoor lanes. 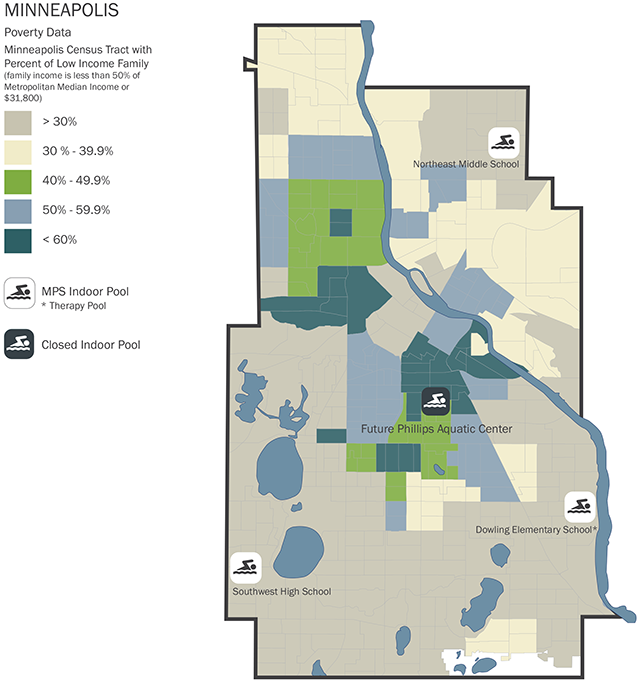 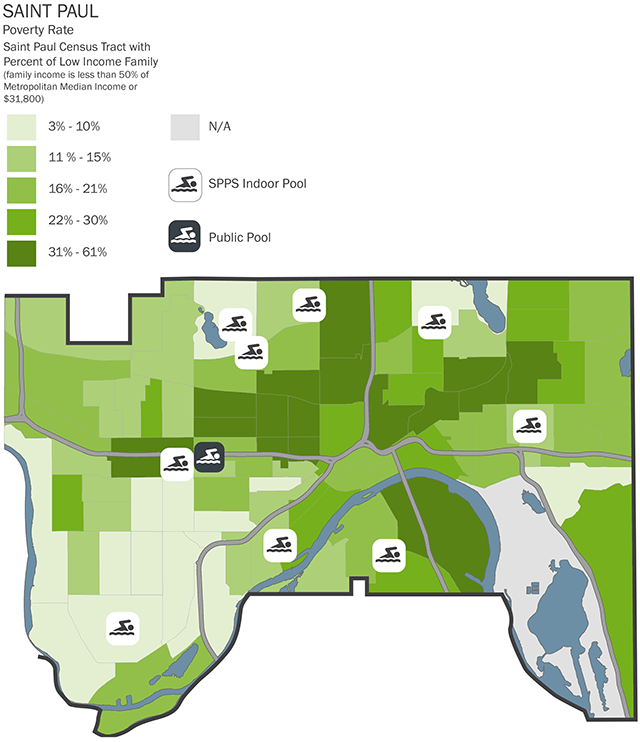 The back and forth that ensued was exhaustive, but the bottom line is that the parks agreed to Minneapolis Swims’ request to put together a feasibility study for turning the facility into the Phillips Aquatic Center, which could be used by a variety of groups.

In 2012, Lieder went to the Capitol to testify, armed with a stack of research showing swimming’s health and cognitive benefits and accompanied by some neighborhood children. When she was done, Hayden asked if lawmakers could hear from the kids.

Her across-the-street neighbor, a small boy from Kenya, made a pretty bare-bones case: “He said, ‘I want to learn to swim so I won’t drown,’” Lieder recalled.

Lawmakers passed $1.75 million in bonds, tacking on a clause requiring a local matching grant of $350,000. Hennepin County tapped a fund established by the Minnesota Twins as part of its stadium deal to come up with the smaller amount. The park board asked Minneapolis Swims for a conceptual design and business plan.

In the proposal, Minneapolis Swims and the Park Board outlined three possible designs. The least expensive could mostly be paid for with the existing state dollars. The other two would likely require private funds.

A consultant who helped draw up the proposal is confident there are philanthropic funds that could help meet the higher construction costs, said parks Commissioner Scott Vreeland, whose district would be home to the facility.

Option A would overhaul the existing six-lane pool and add a four-lane, warm-water pool for swimming lessons. The new, shallow pool could be closed off for privacy, which would facilitate lessons for Muslim girls.

At an estimated cost of $5.8 million, Option B would include the four-lane pool for lessons and expand the main pool from six lanes to eight, which would enable teams from MPS and Augsburg College to compete in many categories.

At $8.2 million, Option C would add a diving pool, which would enable the teams to compete in full range of activities. All three scenarios include renovated locker rooms and office space, although the changes would be minimal under the cheapest proposal.

Even if construction money turned up, he added, the Park Board would need to be confident that the proposed “fee-for-service” model would support the facility. The consultant insists it would, but parks officials are proceeding cautiously.

The park system has said it would contribute some $125,000 of the facility’s projected $576,000 annual operating and program costs as well as $25,000 to a capital reinvestment escrow account.

And while it would be nice if it were self-sustaining from day one — the consultant’s calculations show it running a slender profit — the reality is the first year would probably need a Park Board subsidy, Vreeland said.

“We run outdoor pools and we lose money,” said Vreeland. “We have never run a pool that makes money.”

The Park Board would expect MPS’ use fees to come to a projected $150,000-$220,000 a year, which would give MPS control over about half the schedule. And to give the schools the features the varsity teams need, a capital contribution is probably necessary.

“Minneapolis Public Schools could and should be a part of this,” said Vreeland. “Their use would certainly help stabilize operations.”

A first step toward equity

The father of three MPS competitors, Jon Kramka was one of the parents who spoke at the school board’s January meeting. He’s been agitating for more equitable swimming resources for years.

Rather than wait to resolve an overarching discussion about “secondary” athletics, he sees a district commit to the Phillips renovation as a concrete first step toward equity.

Right now, 179 students — two-thirds of them girls — from six high schools spend most of their year swimming on two consolidated teams. During the regular season they swim together, but because the schools are in different size classifications they can’t swim together at sectionals or divisions.

“It’s a very disruptive reality that our swim teams have to deal with,” Kramka said. “My position is there needs to be equity and accountability across the district so long as we are a district that provides varsity athletics.”

School board member Bates agreed: “I want a plan for swimming in Minneapolis and I want the Phillips pool built.”

The South swim team can’t dive, she noted, because the pool at the Midtown YWCA where they practice is too shallow. And the team has trouble getting to Southwest, where the district’s best facility, renovated two years ago at a cost of $1.2 million, is still subpar.

“They cannot compete,” said Bates. “It’s like having a hockey rink with no ice.”

And with 70 percent of African-Americans and 58 percent of Latinos unable to swim, it’s a small price to pay for what the city would get, Lieder argued.

“Getting it all under one roof — this is revolutionary,” she said. “I’ve had people say this should be a model for the country. … We are the City of Lakes. Our kids need to be able to swim.”

Few pools, little swim teaching: In Minneapolis, an issue of equity and safety