News
Learning Curve
MinnPost’s education reporting is made possible by a grant from the Bush Foundation.
March 21, 2014 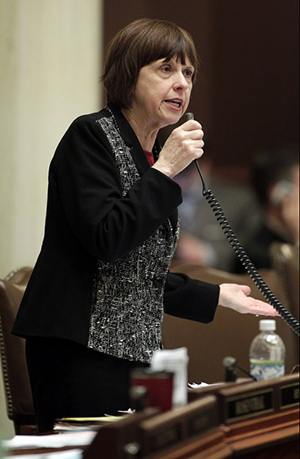 © Minnesota House of Representatives. Photo by Paul Battaglia
Rep. Yvonne Selcer speaks during the floor debate on
her bill to increase reimbursement to schools for free
and reduced-price lunches.

A month ago as the 2014 legislative session was being gaveled open, the Capitol Soothsayer, aka Parents United Executive Director Mary Cecconi, ventured a prediction.

“The overarching issue for the 2014 legislature is the November 2014 election,” Cecconi advised the members of her group, a grassroots organization dedicated to making education policy understandable to parents and other lay folk.

Friday is the deadline for policy bills to pass out of their respective committees. And while this isn’t a drop-dead moment for legislation that doesn’t make it into the omnibus bills that will move forward, it’s a bellwether moment.

Advocates are going to spend the next 12 hours “amending the heck out of things,” to quote Cecconi, so the fates of individual measures may see-saw until the lights go off. But in terms of education policy, it’s probably safe to say her powers of political divination will be vindicated yet again.

(Why am I setting up a legislative roundup as a shameless plug for a longtime Capitol player? You’ll have to read to the end to find out.)

With the exception of the hard-fought Safe and Supportive Schools Act, it seems likely that precious little of what’s going to survive the deadline will be politically risky for the majority. If this remains true, DFLers — the governor and the entire state House of Representatives are up for re-election — can go home after the session and campaign, essentially, on last year’s record of putting new money into E-12.

Exhibit A: Three bills that would eliminate seniority as the default mechanism in teacher layoffs were not given hearings. Sponsored by Sens. Branden Petersen, R-Andover, and Terri Bonoff, DFL-Minnetonka, and Rep. Sondra Erickson, among others, the measures varied on how school districts and teachers unions would factor teacher effectiveness into layoff decisions.

Gov. Mark Dayton vetoed similar legislation two years ago when Republicans controlled both chambers. There are signs that political support for the shift — rebranded from “last in, first out” to “staffing flexibility” — is growing within the DFL but isn’t likely to show itself this year.

Also iffy: An amendment offered by Petersen that would prohibit the closing of contract negotiations unless both teacher unions and district administrators agree to take the talks private. Right now, either may ask state mediators to close the talks.

Community members were angered this year when high-profile negotiations were closed, by the district in St. Paul and by the union in Minneapolis. Private talks continue in the Anoka-Hennepin School District.

A bill promoted by the education advocacy organization MinnCAN that would ensure that student teachers are not placed in classrooms with ineffective teachers still had a shot at being put into the omnibus education policy bill as of press time.

Indeed, any provision that presupposes the very existence of ineffective teachers faced a steep climb this year. This, too, may change.

When teacher evaluations become mandatory statewide next year, school systems that are new to measuring performance are likely to learn what districts that have been at it a long time already know: Relatively few teachers will be found persistently ineffective according to a state task force definition.

That evaluation system gets long-sought funding in the House bill, and a scholarship program designed to help low-income families find and pay for high-quality early childhood education gets another $20 million. There is also help for schools to teach English-language learners.

Also included is a controversial recommendation by a state task force that a trio of teacher basic skills tests be eliminated. Finally, there are a host of tweaks and fixes that essentially put hospital corners on work done during the 2013 session.

Other measures that likely will have to wait for another year include a charter school “authorizer empowerment” bill, an interstate teacher licensing reciprocity bill and a provision to mandate the teaching of swimming.

The aforementioned anti-bullying bill and a measure to extend free lunches to more low-income students are moving ahead separately. Passage is broadly expected, although Safe Schools’ path has been a tortuous one.

Going forward, some of these provisions may be the subject of attempted amendments on the floors of the House and Senate. And items that appear to be safe, swaddled within their cozy omnibus bills, could be excised in conference committees.

And given the pace of this year’s truncated session, if it happens it could occur so quickly even lawmakers have little chance to react. (Indeed Petersen Thursday quipped on Twitter that the minority had less than a minute a page to digest one new measure.)

Which is a very tidy segue back to Mary Cecconi and Parents United. Many education policy advocates are holed up, right now, in the Capitol’s subterranean tunnels and hearing rooms, keeping score and trying to resuscitate their casualties.

Cecconi’s position is unique, however. She has her opinions, and Parents United sometimes opines on a bill. But the 11-year-old organization’s mission remains making policy doings accessible to parents and other ordinary Joes who no more could define cloture than particle physics.

Education advocacy and its funding, by contrast, have become red-hot. And so in recent months Parents United made the tough choice to turn down any grant funding that is attached to a particular agenda or ideological stance.

To do otherwise, Cecconi explained when this session started less than a month ago, would defeat the purpose. The organization instead will have to rely on donations from members who value its services.

Here’s hoping they make it.

Beyond bullying bill, legislators likely to play it safe on education issues