News
Learning Curve
MinnPost's education reporting is made possible by a grant from the Bush Foundation.
March 12, 2014

For the opposition to Minnesota’s anti–bullying bill, the end might be arriving with a whimper. Last year, the bill seemed jinxed to serve as the object of the religious right’s retribution for the passage of marriage equality.

Fueled by the lobbying resources of a far less embattled Archdiocese of St. Paul and Minneapolis and by fears that the recognition of same-sex marriages would spell the end of religious liberties, last year opponents played hardball. Fresh out of the gate this year, they seem to be having a hard time advancing a cogent narrative.

Tuesday a handful of the hundreds of average Joes who turned out to testify for and against the Safe and Supportive Schools Act ended up addressing the Senate Education Policy Committee, the bill’s first stop since its contentious shelving in the final hours of the 2013 Legislature.

After more than two hours of parliamentary kickboxing by outfoxed GOPers and DFLers waffling on how much of a hearing to allow, testifiers told emotional, personal stories of being taunted, beaten and harassed. So much so that at first blush, it wasn’t entirely clear that the opponents weren’t in fact making a case for the urgent need for the bill.

A Maple Grove parent said she would prefer her kids’ teachers deal with issues as they saw fit, and a long-retired teacher from the Anoka-Hennepin School District said she kept classroom miscreants in line with sharp looks and a district-supplied Bible.

Three others ended descriptions of their struggles with a plea for lawmakers to reject the measure, which they claimed would protect “the LGBTs” and not them. None seemed phased when the bill’s Senate author, Scott Dibble, read aloud the passage applying the law to all students.

A young man listening from one of the first-come, first-serve seats in the hearing room wore a bright red shirt emblazoned with a list of people, including sodomites, fornicators, feminists and lukewarm Christians who “Deserve Hell.” Others who showed up wearing buttons and signs tried to cover them when photojournalists began documenting the hearing.

Indeed at times it seemed that the biggest challenge faced by committee Chair Patricia Torres Rey, DFL-Minneapolis, was to figure out how to walk the line between allowing the 75 people who asked to testify to repeat the meme that there is only so much protection to go around and appearing unwilling to entertain voters who had been waiting hours. 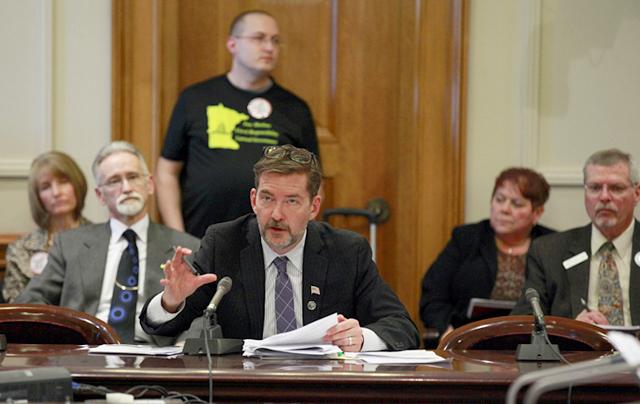 MinnPost photo by Terry Gydesen
The bill’s Senate author, Scott Dibble, testifying the law would apply to all students.

At the outset, Torres Rey announced that she wanted to keep discussion focused on the business before the committee: Consideration of a “delete-all” amendment that would strike most of the language crafted last year and replace it with painstakingly negotiated provisions that satisfied a range of concerns school administrators had been quietly raising for months.

Those issues included a less precise definition of bullying and reporting requirements that districts predicted they would not be able to implement. The changes came on top of late-in-session concessions lawmakers made last year exempting parochial schools while allowing them to keep $75 million in state aid.

The Catholic Church and the other groups lobbying against marriage equality last year depicted the anti-bullying measure as an extension of the push for same-sex marriage, seeming intent on creating a toehold for legally opting out of civil-rights legislation. The church insisted that the law was an “Orwellian nightmare,” that would “usurp parental rights” and create “re-education camps.” Specific language in the bill protecting students from religious harassment and protecting free speech failed to satisfy critics.

The opposition this year is even less mainstream. The Minnesota Family Council placed robo-calls and e-mailed supporters in an effort to pack the Capitol. But the loudest voices this year are those of the Minnesota Child Protection League, an offshoot of Education Liberty Watch.

In turn, Education Liberty Watch is the group that three years ago worked to scuttle an early-childhood-education bill that had broad bipartisan support, arguing among other things that it would create a literal nanny state. Its small but vocal adherents helped to give U.S. Rep. Michele Bachmann her political start. Republican Bachmann fought anti-bullying measures during her time in the state House of Representatives. 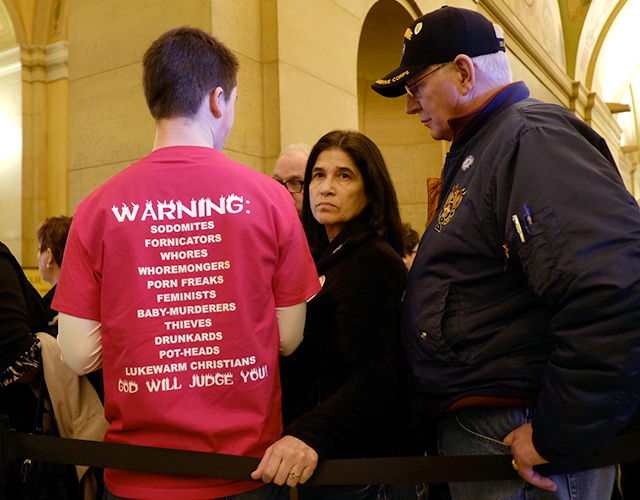 MinnPost photo by Terry Gydesen
A young man listening from one of the first-come, first-serve seats in the hearing room wore a bright red shirt emblazoned with a list of people who “Deserve Hell.”

This year, the Child Protection League promised a billboard campaign to defeat Safe Schools. At least one billboard went up last month, but lawmakers say they are unsure there have been any others.

After going back and forth on how to proceed Tuesday, Torres Rey tried to gavel the meeting to a vote at 2:45, nearly three hours after the hearing started. Sen. Branden Petersen, R-Andover, reminded the chair that she had volunteered at the outset to reconvene at 6 p.m. if those who had made the trek wanted to be heard.

All but one amendment rejected

In the end, the evening session was taken up not by more citizen testimony but by the offering and rejection of all but one of 12 GOP amendments. The bill now moves to the Senate Education Finance Committee.

Its eventual passage onto the Senate floor and then back to the House is expected. But then again, it was expected last year.

Also remaining to be seen: Whether opponents can muster a better offensive than the one on display Tuesday.