News
Learning Curve
MinnPost's education reporting is made possible by a grant from the Bush Foundation.
April 24, 2014

A few days ago Mauri Melander’s heart broke in a way it hadn’t ever before in her 35-year history first as a student and then an educator with Minneapolis Public Schools (MPS).

After years of failed initiatives, overhyped plans and other efforts to change some bleak realities at the astonishingly impoverished Lucy Laney Community School, where she is principal, this year Melander landed on a strategy that was yielding results.

Thanks to a team-teaching approach [PDF], students were posting outsized gains in math. So Melander asked for money to put the same kinds of coaches in reading classes next year. Right before spring break she was told the money would not be forthcoming.

And so, just as hopes had finally been raised, they were poised to be dashed. On Friday, Melander told the Lucy Laney community which, to her utter amazement, responded by getting involved in force.

Parents turn out in force

On Tuesday, 100 of the 109 community members who turned out for a Minneapolis School Board listening session on the 2014-2015 budget identified themselves as North Side residents concerned with Lucy Laney. Wearing the K-8 school’s signature navy T-shirts, one after another, they described in deeply personal terms what the program meant to their families, according to several of those present.

To be clear, this kind of display is not unusual when the board is about to make a tough call. But usually the parents packing the auditorium are from more affluent schools and are accustomed to advocating for themselves. Lucy Laney’s families struggle to get to parent-teacher conferences.

Yesterday, Superintendent Bernadeia Johnson — already a fan of the co-teaching going on at Lucy Laney — said she wants to find a way to fund the effort.

“I’m sold,” she said in an interview. “This is a model we’ve talked about, that I support. It’s something we know can work. As a district leader, it’s on me to make it happen.”

A lesson for all

Indeed, the story of what appears to be going right within Lucy Laney serves as a good illustration of the potential of the contract the district just inked with its teachers and of a number of efforts announced by MPS in recent months.

A graduate of the same University of St. Thomas Collaborative Urban Educator program as Johnson and a number of other MPS educators, Melander arrived at Lucy Laney five years ago as an assistant principal.

Concerned about a districtwide dip in sixth-grade math scores, four years ago MPS leaders assigned a math coach to the school’s four fifth-grade classrooms. Elementary teachers are generalists, and administrators wanted to see what would happen if they had backup from a specialist.

At the end of the year, fifth-grade math was the only grade level and content area where students posted above-average growth in the entire school. Melander got funding for a second co-teacher, and assigned her to the third grade. Next, the model was extended to first grade.

“But then kindergarten and second and fourth were like, ‘What about us?’” Melander said in an interview Wednesday. “And literacy was slipping.”

She lobbied for “mid-year” funding — money that’s sometimes available once budget projections are met — and got it. Lucy Laney now has math coaches in every grade. (As middle-schoolers, sixth- through eighth-graders are already in front of math specialists.)

And she dug into her budget and found money to cap class sizes at 18 pupils per teacher in all grades, not just the K-3 classrooms where challenged schools often keep ratios down.

In some classrooms, the co-teachers work side by side. Often, they split the class into small groups and rotate among them. In addition to moving from classroom to classroom, the co-teachers work with the district’s focused instruction initiative — an effort to equip teachers to know where each learner is, among other things.

Better math results are just one of the positives Melander said she and her teachers have noted. Students are engaged, for starters.

“During that time there’s no one coming out of that room,” she said. “During co-teaching hours no one’s being referred out and there are no behavior issues.”

Initially often mistrustful of working alongside someone else, teachers report they are benefitting, too. Lucy Laney has one of the least experienced faculties in the district and lots of teacher turnover.

Putting an experienced co-teacher in a classroom provides an organic source of mentoring for new instructors. Coupled with the voluntary cap on classroom size, Melander said she has actually fielded inquiries from more experienced MPS teachers who are interested in exploring working in a team setting. 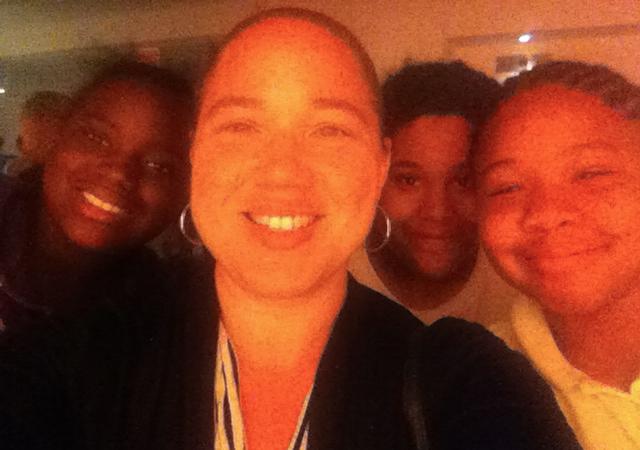 lucylaney.mpls.k12.mn.us
Principal Mauri Melander: “I knew beyond a shadow of a doubt that you can’t be at a school like this and start to taste success and then be, like, ‘Just be satisfied with what you’ve got.’”

On top of all of this, the approach seems to jibe with several initiatives underway within MPS. Frustrated with the lack of progress toward closing the achievement gap, early in the winter Johnson announced a plan to change the way district works with time and staffing.

In addition to giving extra academic time to selected students, MPS would put teams of two teachers in classrooms in its most struggling schools. Many of the skilled co-teachers would be reassigned from other administrative or support duties, according to CEO Michael Goar.

Flexible staffing and focused resources for schools that persistently underserve their students are also at the center of Johnson’s SHIFT proposal and the teacher contract the board approved at its last meeting.

In short, what has been going on at Lucy Laney looks a whole lot like the tactics contemplated by MPS leadership.

Earlier the day of the board listening session, Johnson was at the school watching the teams in action. Students were engaged, she agreed.

“I drank the Kool-Aid yesterday,” she said. “They’re engaging students at the academic level and helping them be successful.”

Staff are engaged, too, she added: Melander’s “teachers believe in this as well. There’s a renewed excitement and engagement from her and her staff. It’s exciting for a school that’s struggling.”

That excitement is the reason Melander decided she had to be honest with her team about the uncertainty around co-teaching’s future.

“I knew beyond a shadow of a doubt that you can’t be at a school like this and start to taste success and then be, like, ‘Just be satisfied with what you’ve got,’” Melander said Wednesday.

The turning point happened last week at a presentation on race Melander attended with a group of her teachers. As part of a discussion about the landmark Brown v. Board of Education case, the speaker showed maps of states with Ku Klux Klan affiliates.

With eight, Minnesota had relatively few. “You don’t need the KKK,” Glenn Singleton said, “because you have the largest achievement gap in the United States.”

“It caught me, because as a member of the African American community I have paid very careful attention to Brown v. Board of Education,” said Melander.

Leveling with the staff

The next day she leveled with her staff, who had already begun talking about how co-teaching could look next year.

Team members aren’t widgets, however. And Melander Tuesday night expressed concern to board members that hiring co-teachers in, say, July, after the new budget has been formally adopted, will not allow for the collaborative planning that has made the math teams so successful.

Did she do the right thing making her frustration public? Melander is past that question.

“If you know that you’ve got a site on Penn and Lowry that is gushing out money, then six teachers are really not that big of a deal,” she said. “Passion without power is pointless.”