News
Learning Curve
MinnPost’s education reporting is made possible by a grant from the Bush Foundation.
April 10, 2014

It was, finally, Walter Roberts’ moment in the sun.

Wednesday afternoon found Roberts standing on the front steps of the state Capitol in a gold silk vest and tie that were the exact shade of the gilt statuary — appropriately titled “Progress of the State” —  several stories above him.

A professor of school counseling at Minnesota State University Mankato, Roberts is one of Safe Schools’ under-celebrated champions. Formally, he was the co-chair of the state task force whose work underlies the new law. 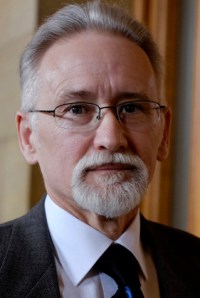 But really Roberts, who intentionally kept a low profile, was the campaign’s worrier in chief. A nationally recognized expert, Roberts has been ringing the alarm bell about Minnesota’s school-climate crisis since 2001.

Since February 2012, when Dayton tapped him to spearhead the effort, Roberts has spent so many hours criss-crossing the state that he drove a beloved Volkswagen Jetta into the ground and put 27,000 miles on a new Honda Civic.

This week alone, stressed about vote and threatened filibusters, Roberts made the trek from Mankato to the Twin Cities and back Monday, Tuesday and Wednesday. By the time he was ushered to a prime position at the signing ceremony, he was giddy from fatigue.

“This is a culmination of my life’s work and advocacy in this area and has dominated my life almost completely for the last two years,” he texted a reporter in the run-up to the event. “Today my back is sore, my legs and feet ache from crawling up and down those marble stairs wrangling for votes, and I’m sleep deprived, but it’s all worthwhile.”

Indeed, if ever there was an issue that needed a designated fretter it’s requiring schools to acknowledge and address bullying. For fully eight years, Minnesota lawmakers — mostly DFLers — have sought and failed to strengthen the state’s 37-word anti-harassment statute.

Last year, with the party in charge of both legislative chambers and the executive branch, few expected that Davnie and Dibble would be unable to maneuver a new law to passage. But House and Senate leaders, some of whom were tepid on the topic, didn’t move the measure until late in the session.

And even as marriage equality was garnering sturdy vote margins, opposition from the Archdiocese of St. Paul and Minneapolis and from fundamentalist groups had Davnie, Dibble, Roberts and others scrambling to combat claims that the anti-bullying bill would infringe on religious freedom.

After Senate GOPers threatened to run out the clock during the waning hours of the last night with a filibuster, Dibble shelved the measure, vowing to pass it first thing this year.

In fact, when Safe Schools was resurrected in February, the public education lobby was concerned that it would go through so quickly that there might not be time to make a number of technical changes that would make implementation less burdensome.

Resistance all the way

Yet even after the concerns were addressed the measure met resistance at every step. Tuesday, when it made its final stop on the House floor, six hours were set aside for testimony.

As that time limit came and went, GOP lawmakers called the bill facist and Orwellian, questioned the name the Revisor of Statutes had given it, asked the same questions multiple times and read the measure out loud.

As the seeming filibuster went on, Rep. Ryan Winkler, a Golden Valley DFLer, sent out a steady stream of comic tweets mocking the opposing party:

There are 10 Amendments in the Bill of Rights of the Constitution. Count them. One, two, three, ten. #mnleg

It’s my turn to repeat the same argument you’ve been hearing for hours. #mnleg

It was after midnight when the measure finally passed. Roberts did not get back on the road, however, before establishing the time the bill would be signed into law.

“I actually have found myself breathing again,” Roberts announced the following morning. “And my lips are curling up in the corners.”