News
Learning Curve
MinnPost's education reporting is made possible by a grant from the Bush Foundation.
May 27, 2014

It’s no secret to anyone who has spent time in schools that the behavior of a single student can bring an entire class to a halt, testing the patience — not to mention classroom management skills — of the most veteran teacher.

And yet sending the student out of the classroom, particularly by suspension or expulsion, frequently starts them on a path that ends in dropping out. When the student reappears elsewhere, it’s as a grim statistic.

A student kept out of the classroom three times by ninth grade is virtually guaranteed not to graduate. Add to this the fact that the reason for 95 percent of exclusions is disruptive or disorderly conduct — nonviolent behaviors for which African American kids are most singled out.

Last week, a group of classroom teachers took the highly unusual step of showing up at a regular meeting of the St. Paul School Board to plead for changes to the district’s policies regarding discipline and the mainstreaming of many special education students.

A larger contingent of community members showed up in support of St. Paul Public Schools’ effort, begun last fall, to return special needs students, including those with emotional and behavioral issues, to regular classrooms. According to district leaders, 80 percent of students once taught in isolation are doing “incredibly well” in mainstream classes.

By the end of the contentious, standing-room-only meeting, both groups seemed to have a better appreciation for each other’s concerns, according to some who were present. District leaders, the observers hoped, came away with a fresh understanding of how crucial implementation is.

“It is clear that the old system of educating kids is not working,” said R.T. Rybak, executive director of the education coalition Generation Next and one of those in attendance last week. “We have a generation of evidence that it doesn’t.”

Both Minneapolis and St. Paul have taken potentially transformational steps in recent months, he added.

“I’ve watched with awe over the years as St. Paul has navigated through some very tough issues of race and equity,” said Rybak. “This is an example of some of the very tough decisions we have to make if we are going to make headway.

“In St Paul, the superintendent is trying to bring people together to have the most difficult conversation you can have in America, which is about race,” said Rybak. “In Minneapolis, it’s having teachers agree to a new strategy that can be used at the lowest-performing schools.”

Other Minnesota districts would do well to consider the St. Paul clash a cautionary chapter and begin communicating with community members about the needed changes and equipping teachers with alternative strategies, public education advocates say.

Statewide, there were almost 45,000 suspension and expulsions in the 2012-2013 school year, according to Minnesota Department of Education records. In the two districts with the highest concentrations of Native American students and students of color, the disparities are stark.

In St. Paul, African American male secondary students with a disability are at a 66 percent risk of suspension, according to an analysis of data from the 2009-2010 school year. By contrast, 9.2 percent of all district students risked suspension that year.

State disciplinary data show that the rate at which the district relies on “exclusionary practices” — suspensions of 24 hours or more or expulsions — has fluctuated in recent years, changing little overall.

Worse, while one third of St. Paul students are African American, they make up two-thirds of those classified as having “emotional-behavioral disorder,” a special education classification that includes behavior perceived as defiant or disruptive.

As state and federal officials increasingly press schools to reduce racial and ethnic disparities in discipline, similar tensions are increasingly likely to crop up in districts around Minnesota. The issue is equal parts resources and mindset, and with one in short supply and the other tough to change, controversy can be expected.

Both Minneapolis’ and St. Paul’s school systems have been cited by the U.S. Department of Education’s Office of Civil Rights for the troubling rate at which students of color, and in particular African American youth, experience the most damaging forms of discipline.

In what is becoming the education hallmark of President Barack Obama’s administration, the DOE has stepped up collection of data that highlights inequities. This year, for example, marks the first time the feds have collected data on preschool discipline.

Even here the disparities are clear. African Americans make up 18 percent of public preschool enrollment but almost half of preschoolers who are suspended more than once. 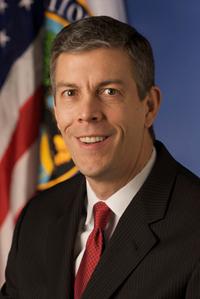 Hours before the standing-room-only St. Paul board meeting, U.S. Secretary of Education Arne Duncan vowed to keep pushing “the key civil rights issue of the day.”

“Black 3- and 4-year-olds are much more likely to be excluded” from school, Duncan told the annual Education Writers Association conference. “When students of color and students with disabilities are disproportionately suspended or expelled, and when that disciplinary action stems from discriminatory policies or practices, it’s a civil rights violation.”

Starting in 2015, DOE’s Office of Civil Rights will begin collecting data on in-school violence, the number of school days missed by students who were suspended and bullying on the basis of sexual orientation and religion. Districts will also be required to report teacher salary spending, as well as demographic data on students who complete Advanced Placement and other higher-level coursework.

Duncan also proposed a $300 million Race to the Top initiative to fund innovative state and district equity initiatives, including efforts to reduce suspensions and expulsions and to eliminate disparities in discipline.

That the data and the policy focus are already identifying hot spots does little for the classroom teacher who is in the difficult position of keeping a class on track without the ability to send a disruptive student to the office.

A cooperative of west-metro school systems, Intermediate District 287 is responsible for educating some of the Twin Cities most challenged students. In addition to operating schools for children with unique and intense cognitive disabilities, 287 provides schooling for students with unmet mental health needs — a number of whom exhibit violent behaviors.

Using a combination of strategies aimed at replacing punitive measures with positive discipline and school culture, 287 had reported just 15 suspensions by mid-March — five of them associated with one particularly challenged student.

Anxious to reduce the number of students who need their expensive, specialized services, District 287 this year asked lawmakers for $250,000 to provide training for at least one school in each Hennepin County district. The idea: Getting an entire building pulling in the same direction in every community would convince educators in other buildings that there is an effective alternative.

The state dollars aren’t forthcoming, but the district has decided to go ahead and offer its training to any program in the state. Osseo and Duluth, two large districts under pressures similar to those of Minneapolis and St. Paul, already have expressed interest.

Everyone must be in

Schoolwide buy-in is crucial, added Eric Kloos, a supervisor in the Minnesota Department of Education’s special-ed division. MDE has been training school faculties in Positive Behavioral Interventions and Supports for 10 years, he noted, during which time it’s become clear that 85 percent of the adults in a building need to support the approach for it to succeed.

As of last fall, 480 schools had received MDE training in the strategy, he continued. Last week, the department singled out 30 Minnesota schools where the effort is working for recognition.

“No one sets out to have disproportionate impacts,” said Kloos. “For many years our attention has been on student behavior, but increasingly our attention is on the system.”

Which makes adequate support for teachers crucial. For his part, Rybak did not hear indifference to equity from the unhappy teachers who addressed the St. Paul Board last week. To the contrary, by the end of the meeting, he said, it was clear that the plea was for practical assistance.

Rybak praised St. Paul teachers and leaders for their efforts so far. “This is incredibly tough work,” he said. “It’s easier for everyone except the students to isolate those in special ed or English-language learners but it’s also not producing the results we need.”

Kicked out of school: Disparities are a looming crisis for all districts