News
Learning Curve
MinnPost's education reporting is made possible by a grant from the Bush Foundation.
May 5, 2014

The dozen African-American ninth-graders who clattered into a sun-infused classroom at Patrick Henry High School on a recent Monday afternoon divided themselves into two rough groups: a row of class clowns and one of angry faces.

Textbooks thudded loudly onto desks arrayed in a large rectangle. On the sullen side of the room, two students immediately put their heads down on crossed forearms. No one looked at the out-of-town visitor.

Executive Director of the Office of African American Male Achievement for Oakland Unified School District Chris Chatmon introduced himself and asked if anyone knew where Oakland is. In return, he got wary stares.

Chatmon was in town at the invitation of Minneapolis Public Schools (MPS) to meet with the students and with teachers and district leaders who have committed to launching an effort modeled in part on the lauded California initiative to advocate in a new way for both districts’ most poorly served group. His visit was paid for by a local philanthropic group, the Doorstep Foundation.

The same group of MPS leaders who invited Chatmon to come describe Oakland’s work last week returned from a conference in Mississippi. There, they heard from the Council of Schools Educating Boys of Color and talked about President Barack Obama’s recently announced initiative, My Brother’s Keeper.

Overnight Obama’s announcement catapulted Chatmon to the forefront of a national movement that’s easier to depict than to describe. To wit:

One of the first things Chatmon did when he was tapped four years ago was to start interviewing students. In terms of the indicators, black boys were dead last on virtually every one, particularly literacy. Clearly, the Oakland Unified School District was failing them, but what was their experience? How did school feel to them?

What they told him:

“Overwhelmingly, 80 percent of students said, ‘When we show up on the school campus, adults view me and treat me as if I have done something wrong,’ ” Chatmon told a group of MPS stakeholders the night before the school visit. “And 80 percent said they do not have enough access to African American men.”

The combination, he added, makes school a toxic experience for black youth: “Many of our kids don’t care what you know until they know that you care.”

The same dynamic played itself out a few hours later at Patrick Henry. Chatmon greeted the youth by asking each to say a couple of words each feels describe him.

“Brother Javari, would you mind starting?” he asked the student who had made the biggest display of putting his head on his hands.

“Yes,” the student shot back. “I don’t feel comfortable.”

So Chatmon turned to the row of jokers and pointed at a student who described himself as athletic and outgoing, only to be cut off by Javari.

“You said to say a couple of words.”

Chatmon calmly asked him to “not cut down a brother who has the courage to speak out.” Far from continuing to seem defensive, Javari sat  up.

Similar feelings to those of Chatmon’s students

And yet asked their feelings about school, the group — by now wholly engaged — was clearly also pretty angry. Asked by Crystal Ballard, the principal intern overseeing Patrick Henry’s already-in-progress effort to support African-American boys, what they would fix about their school, the students said pretty much what Chatmon’s students said.

Specifically, teachers do not listen to them, perceive them as lazy, are more interested in students completing work their way than in acknowledging students’ own solutions and are afraid to let them make choices.

“You call us out for what we do wrong but you don’t know what’s going on outside of school,” said one. “Like my friend got put out of his house.”

“To be truthful,” said another, “most people are just smoking and drinking.”

Unflappable, Ballard pressed students for specifics and managed to simultaneously make sure Javari got heard yet did not dominate the conversation.

“It’s clear we are not moving fast enough,” she said to Chatmon after the teens had left the room.

Getting results in Oakland

During the four years that black boys have had “an advocate and an agitator,” Oakland schools have reduced suspensions by 50 percent, seen a resulting bounce in school coffers, since schools are funded according to days students attend, doubled the number of African-American males in Advanced Placement classes as well as the number scoring proficient on state tests.

Reducing racial disparities in suspensions and expulsions is another new Obama initiative. MPS is working closely with the U.S. Department of Education’s Office of Civil Rights to reduce its discipline disparities.

And the district is building relationships between students and adult black men, many of them community volunteers who help run “manhood” classes for middle-schoolers and high-schoolers.

Among other things, the classes teach young men to “code-shift,” or switch back and forth from the vernacular used at home to the one used in middle-class, white society. They also are helped to identify personal triggers and other stressors caused by having to navigate both cultures.

At Patrick Henry, Principal Latanya Daniels had an epiphany last year. The organization College Possible has an astounding track record of positioning at-risk students to enter and complete college. And the group wanted to expand the work it was doing in the high school. But there were not enough black males who met the admissions bar of a 2.0 grade point average in 10th grade.

“That was it for me,” she told Chatmon. Rather than try to implement a change of culture within the school from the top down, she and Ballard began by listening to its teachers. The result: a homegrown initiative to work differently with all 76 black ninth-grade boys starting this year.

The Patrick Henry team working on the effort was part of the MPS delegation that attended last week’s national conference in Mississippi. Associate Superintendent Michael Thomas came back on fire about the possibilities. 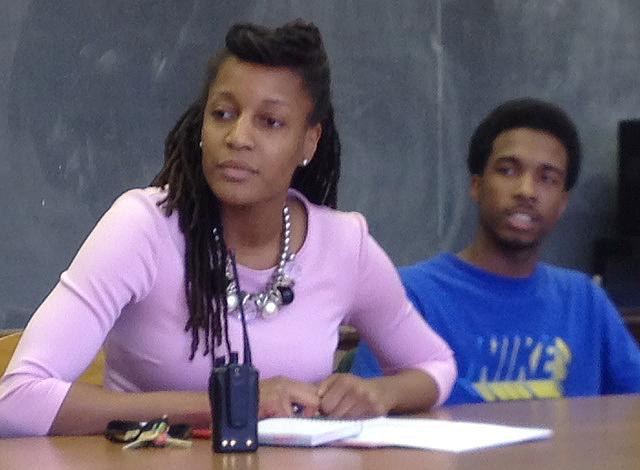 MinnPost photo by Beth Hawkins
Rather than try to implement a change of culture within the school from the top down, Crystal Ballard, left, began by listening to its teachers.

Sankofa is a Ghanaian word that means, “reach back and get it,” or, understand where you came from to understand where you are now. Thomas used to run a Sankofa program, very much like Oakland’s manhood classes, in St. Paul Public Schools. He’s anxious to bring the approach to MPS, albeit possibly as an after-school opportunity.

And he’s convinced that knowledge of Sankofa’s Afrocentric themes can help white teachers become culturally responsive. “Just because you’re white doesn’t mean you’re not right,” he said. “You can connect with kids of color.”

In fact, what he’s heard from Patrick Henry faculty in response to the school’s initiative is a plea for a commitment from district HQ to continue investing in helping teachers with cultural literacy.

Thomas is also looking for opportunities to help MPS schools adopt the “rites and rituals” that other districts are using to celebrate black-male achievement. In particular, he was energized by a coming-into-manhood ceremony that took place at the conference.

There’s no doubt in his mind the affirmation would be just as powerful here as elsewhere, Thomas added.

A few days after Chatmon’s visit to Patrick Henry a schoolwide “100 Strong” event took place in which black men from the community came to the school to talk with students in groups.

“Just walking through the halls at that event — it was a sea of African-American males,” said Thomas. “The chatter in the hallways? All you could hear was, ‘Who’s that?’ ‘Who’s that?’ ‘Why are all these black men here?’”

Thomas may be a ranking administrator now, but he was a black boy. “They’re not so far removed from some of the realities I experienced,” he said. “That was a powerful visual statement, to see a congregation of black men, all pretty well dressed, in their halls.”