News
Learning Curve
MinnPost’s education reporting is made possible by a grant from the Bush Foundation.
July 3, 2014 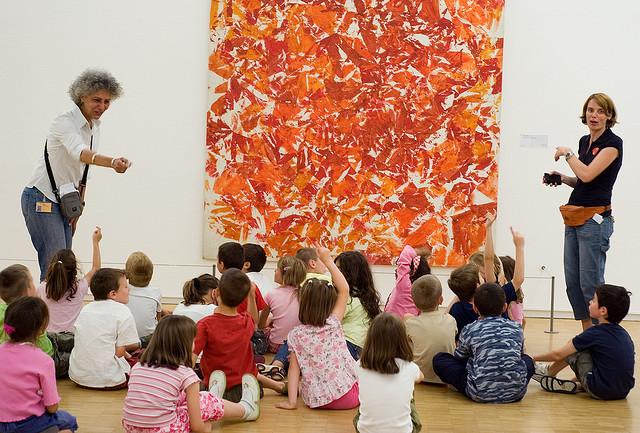 CC/Flickr/Brett Davis
“We have decades of research showing students engaged in arts outperform, have better attitudes about school and are less likely to drop out than their peers,” said Arts Education Partnership director Sandra Ruppert.

A few weeks ago, MinnPost News Editor Tom Nehil and I attended the annual conference of the Education Writers Association. It was three looooong days of workshops and panels packed with great information that’s been creeping into our stories ever since.

Like many of the journalists in attendance, I was asked to blog about one of the sessions for the association’s website. I ended up covering a panel on writing about arts in education.

I was intrigued because in my experience arts is one of those topics that’s tough to work into the news cycle. There’s the story about its disappearance from the prototypical school schedule, its shrinking perch in the budget and whether it drives achievement.

But once you written those, what else is there? Lots, it turns out.

And so today’s blog post is stolen directly from EWA’s Educated Reporter blog, where Public Editor Emily Richmond supplies a steady stream of good journalism and research. Once you finished it you really ought to click on over to the website and see the post about a panel I moderated at the conference on teacher leadership; it was written by Pioneer Press education reporter Christopher Magan.

“Kids Got the Beat: Arts and Music Enrich Student Learning,” by Beth Hawkins for EWA:

When Sandra Ruppert was growing up in Los Angeles every classroom at her school, Hancock Park Elementary, had a piano. And every teacher could play it.

“I made my first trip to the opera in third grade, learned ballroom dancing in the fourth grade and took violin in fifth grade,” Ruppert told those in attendance at “Kids Got the Beat,” one of the final panels of EWA’s 2014 National Seminar, held last month in Nashville. At her school, “there was artwork in the halls and seamlessly integrated into all kinds of classes.”

No one questioned the value of the arts as part of a good education, and no one questioned whether that value justified the time or the money needed to suffuse arts into students’ days.

Now the director of the Arts Education Partnership, Ruppert has a dream of restoring arts and music education — which she refers to as one of the nation’s “secret weapons” — to every American classroom.

“When people ask me what my vision is, I say I want every child to have the same opportunity to experience the arts as I had at Hancock Park Elementary,” Ruppert explained to reporters gathered at Vanderbilt University in Nashville for the seminar.

A coalition of 100 organizations launched by the Council of Chief State School Officers, the partnership has amassed a trove of research showing the critical role arts play in academic performance — as well as crushing disparities in access to it.

“We have decades of research showing students engaged in arts outperform, have better attitudes about school and are less likely to drop out than their peers,” Ruppert said. Yet some 1.3 million U.S. elementary students receive no specific music instruction today, and 4 million do not have visual arts curriculum.

“They are disproportionately students who attend high-poverty schools, are learning English or who have special needs,” she added. “They are the ones who can benefit the most.”

Need evidence? Look no further than Metropolitan Nashville Public Schools’ “Music Makes Us” program, a two-year-old effort to position the community’s schools as leaders in music education. The program is a partnership with the city’s mayor’s office, where the idea was hatched, the Music City Music Council and recording industry leaders.

There is also research tying a year or more of music to a 15 percent higher GPA, a 16 percent hike in ACT scores in English and a 9 percent increase in math ACT performance, Schell said.

Because the music industry has a $9.65 billion impact on the Nashville region, “Music Makes Us” also makes business sense, Schell added. In addition to beefing up traditional music programs like band, orchestra and choir, the program so far has added 40 contemporary music classes.

Schell’s goal is for all elementary pupils to participate in music programming, and to increase middle-school participation from 43 percent to 50 percent and high school involvement from 27 percent to 35 percent.

So what advice did the panelists and moderator Mary Plummer, whose KPCC-Southern California Public Radio beat is arts education, have for reporters who don’t work in the Music City? Get familiar with the Arts Education Partnership website.

Resources on the site include Artscan, an up-to-date compilation of arts education policies in every state and a tool that allows for state-to-state comparisons on topics ranging from participation rates to state standards and arts educator licensing requirements.

Also easily accessible on the organization’s site, ArtsEdSearch is a one-of-a-kind data clearinghouse of research on arts education outcomes. Visitors can search for studies associated with student or educator performance, and of arts education during the school day or during out-of-school time.

Finally, the partnership has compiled resources regarding the Common Core State Standards, including a state-by-state implementation tracker and the standards’ likely implications for arts integration.

“We created this, frankly, because I got tired of hearing policymakers say we’d love to support the arts, if only we had some research,” said Schell. “We have boatloads of research.”