For the past 18 months, Ember Reichgott Junge has been touring the country in support of a book she wrote about the origin of charter schools. At every stop — including appearances before charter school authorizes and administrators — she hears the same thing: “I didn’t know that.”

In the process, the author of the nation’s first chartering law has compiled a list of myths and misconceptions about charter schools.

At the very top: Charter schools have partisan or ideological roots.

Reichgott Junge, the former state Senate majority whip who shepherded the law to passage, laughs at this one. “I was interviewed live on Arizona public TV, and they said I could not possibly be a Democrat,” she said. “In Arizona, charters are seen as a Republican thing.”

In fact Minnesota’s 1991 charter law was a bipartisan creation. The template was created by a Citizens League task force, supported by the iconic teacher union leader Al Shanker and voted in by those in the middle of the political spectrum, she notes.

And yet, nearly a quarter century after the law’s passage the perception persists. In Reichgott Junge’s view, it’s time for charter proponents to go on the offensive. Indeed, her words will ring at least as controversial to many charter school proponents as they will to detractors.

What are the other myths on her list? Good question — before we answer it let’s hear how she came to be touring and collecting them in the first place.

(We should also pause to note that MinnPost has several pieces in the works that will look at trends in education in other parts of the country that are fueling the roiling debate over charters here.)

In the two decades after the charter law was passed, countless ideological and philosophical debates became attached to it. Anxious to set the record straight, Reichgott Junge wrote “Zero Chance of Passage: The Pioneering Charter School Story” (Beaver’s Pond Press). Published two years ago to good reviews — including one that appeared in this space — the book is an artful political narrative.

It describes, in compulsively readable terms, the painstaking crafting, refining and coalition building that go into the creation of a landmark piece of legislation. Indeed, the author re-reported the story, conducting dozens of interviews.

But possibly the best part is the historic photos. Not least: A photo of an impossibly young Reichgott Junge speaking at a hearing. Then a New Hope DFLer, she was the youngest woman ever elected to the Senate.

Since the book’s publication, Reichgott Junge has been speaking to education groups throughout the country. She’s done a lot of professional development for teachers — as well as trainings and presentations for business groups, philosophical groups and charter networks.

The myths, she has found, are largely variations on the original objections to charters raised during the legislative debate over their creation.

“One third of Americans still believe that,” said Reichgott Junge. “And unfortunately sometimes our friends in the media say that they are privately run. But that’s not true.”

They are public schools that are independently run. Consequently in Minnesota and most other places they must admit students either via lottery or first-come first-served.

No. 3: Charters are a wedge to crack open the door to private school vouchers.

They are in fact a mechanism for creating the opportunity to open new schools, particularly to try to innovate. Vouchers, by contrast, are a mechanism for providing funding to existing private schools.

“There’s no opportunity there to try something new,” she says. “They are just a way to direct money to an existing system.”

To Reichgott Junge’s facts add a perceptual caveat: There are plenty of folks, both in the for-profit education sector and on the religious right, who would very much like this to be true. And who have repeatedly raised vouchers’ potential for delivering quality education to poor kids, possibly as the aforementioned wedge. 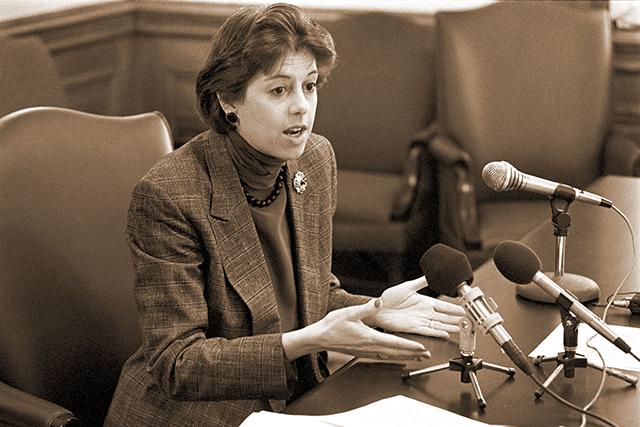 In education finance, public money is supposed to follow the student it is intended to educate.

“The question here is who gets to spend it,” said Reichgott Junge, “the parents and the teachers at the school or a district superintendent? … The real issue is that superintendents don’t get to spend the money the way they want.”

Posed another way, she added, school districts argue that they should have the same amount of money to educate fewer students. There are some fixed costs, but fewer students on the whole mean less spending.

No. 5 is more relevant in other states but likely to come increasingly under discussion in Minnesota: Many states have for-profit charter schools, which rely on public money.

“The point that gets lost is that all charter schools are managed by a nonprofit board of directors,” said Reichgott Junge. “They [can] choose to hire a management company, either a for-profit or a nonprofit. They choose to hire it because they believe the company provides some expertise that will allow the teachers of the school to concentrate on teaching.”

Unlike many states, which have sought out nonprofit charter networks such as Uncommon Schools and Yes Prep, Minnesota has little experience in this department. There is one local charter affiliated with Knowledge is Power Program, but a planned expansion here by that network hasn’t been mentioned in years.

There is one nonprofit charter in the works that is set to contract with a for-profit company for some of its offerings. And in the fall of 2015 Minnesotans can expect to see the arrival of nonprofit management companies.

“Many have leaders who were former teachers,” said Reichgott Junge. “The myth is that a management company — even a nonprofit management company, where you don’t have the same profit issue — somehow usurps the authority of the teachers for the curriculum.”

Again, there is room for nuance here. Most Minnesota charter proponents have preferred a grow-your-own strategy. Many other states, however, actively court nonprofit charter networks for a couple reasons: They have more resources, allowing them to invest more in professional development and making scarce start-up funding less of an issue.

No. 6 concerns innovation, chartering’s original promise. Reichgott Junge agrees that the chartering movement has lost the focus on innovation, and that there needs to be more.

The confusion here is likely that some of the innovations spawned in those individual schools are now being replicated by school districts throughout the country.

And finally, No. 7: Charter schools do not perform as well as district schools.

“You will find a study for any point of view,” she said. “Here’s what the National Alliance for Public Charter Schools says: 15 of the last 16 studies of charter schools nationally show that charter school students outperform their peers in traditional public schools and close the achievement gap. And they do this with far less money.”

To all of this Reichgott Junge adds a caveat of her own: The authors of Minnesota’s charter law never anticipated the arrival of the virtual school. The online-only schools, and especially those operated by for-profit corporations, are best dealt with as a category of programs unto themselves.