News
Learning Curve
MinnPost’s education reporting is made possible by a grant from the Bush Foundation.
Aug. 14, 2014

News that a 15-year-old South High student drowned in Lake Nokomis rocketed through the Minneapolis Public School community grapevine last week. A dip in the lake is a popular post-practice stop for the school’s athletic clubs and teams, and lots of South kids were supposed to be there Wednesday afternoon.

In the hours before football player Sha-kym Adams’ name was released, South’s teens and parents — along with frantic school board members — engaged in an afternoon of anguished texting and calling, trying to figure out who was safe and who wasn’t.

For Hannah Lieder, a neighborhood activist who has spent the last four years trying to get Minneapolis an indoor public pool where low-income children can learn to swim, there was an additional layer to the tragedy.

The effort to revamp a mothballed Phillips pool was set for a crucial Park Board vote Wednesday night. As she processed news of Adams’ drowning, Lieder realized his death was one of several to take place in the hours before the many hearings concerning her proposal.

Right before an April community event at which a number of public agencies voiced their support for the effort a 16-year-old Liberian immigrant drowned in Plymouth. In the hours before a crucial vote on bonding money, a 17-year-old from north Minneapolis drowned.

(Adams’ mother, it should be noted, told his classmates that he could swim.)

The deaths lend urgency to the public-policy debate on swimming as a civil-rights issue, certainly. But that’s not so much the significance of Lieder’s mental list. The fact that she can correlate a drowning to so many milestones is a visceral sign of the horrific racial and ethnic disparities in drowning rates.

Minnesota has the nation’s highest drowning rate for African-American youth and the third highest for Native Americans. Nearly three-fourths of African-Americans and 58 percent of Latinos can’t swim.

Drowning is the leading cause of accidental death for African-Americans between ages 5 and 14. They are three times as likely to drown as their white peers.

A major cause: The historic segregation of pools and beaches means generations of black parents passed on their fear of water. Without places where poor kids can learn to swim — instruction used to be common in schools — the cycle goes unbroken.

“This is the unfinished business of the civil-rights movement,” says Lieder. Minneapolis Public Schools (MPS) Superintendent “Bernadeia Johnson got up at the April meeting and about how when she was growing up in Alabama she didn’t learn to swim because she couldn’t use the pool or the beach.” 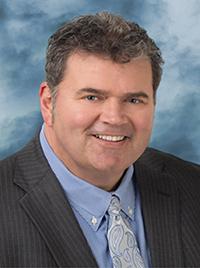 In June Lieder, who has a new child, passed the helm of Minneapolis Swims, an 8-year-old nonprofit working to close the aquatic gap, over to another community volunteer, Denny Bennett.

After a few fireworks Wednesday night, while Adams’ coach and classmates were consoling one another, the Park Board voted to go forward with the pool project. A nonprofit developer by trade, Bennett must now finish raising both money to rebuild the facility and funds to ensure scholarships for low-income swimmers.

Bennett came to the issue because his oldest child is captain of the Washburn swim team, which practices and competes with the teams from Roosevelt and South. The students must swim at odd hours and at pools far from their schools.

All but two lap pools closed by MPS

Over the years MPS closed all but two of its lap pools, which are expensive to maintain. The remaining facilities are in the far northeast and southwest corners of the city. Bennett’s child’s team may also use the Midtown YWCA, but at 6 a.m.

“When we moved here from Chicago, I had said to my wife — we had one baby then and one on the way — ‘Gosh, with all these lakes we’re going to have to make sure there are swimming lessons,’ ” Bennett recalls. “I was shocked to learn there was no indoor public pool in Minneapolis.”

While the schools were winnowing their aquatics programming to competitive swimming, the park system had never operated an indoor pool, putting its resources instead into waterparks.

In 1986, MPS donated a shuttered junior high with an indoor lap pool to the parks, which leased it to the Boys and Girls Club. The group gave the building back in 2008.

As Lieder, outraged at the rate at which her neighbors’ children were drowning, began drawing attention to the inequity in swimming, it was clear to virtually everyone that renovating the mothballed pool was the best solution. She faced one political hurdle after another.

A bill authored by Minneapolis DFL Rep. Karen Clark to require schools to teach swimming to all Minnesota students languished in the 2014 Legislature.

Four years after what has been a remarkably tough slog, all of this puts Minneapolis Swims and the Park Board, which will own and operate the facility, a miraculous $300,000 from being able to break ground. But Bennett hopes to raise $5 million. He has six months to do so.

For $2.8 million — the amount Minneapolis Swims has nearly secured — it could overhaul the existing six-lane pool and add a four-lane, warm-water pool for swimming lessons. Some renderings would close the warm-water pool for privacy, which would facilitate lessons for Muslim girls.

More attractive and versatile — and thus more sustainable in the eyes of the swimming advocates — would be a $5.8 million option that would include the four-lane pool for lessons and expand the main pool from six lanes to eight. Because of the complicated rules governing competitive swimming, this option would enable school and college athletic teams to hold and participate in matches.

‘Definitely, positively getting a pool in Phillips’

“The hard-fought win — and it was hard fought — is we’re definitely, positively getting a pool in Phillips,” said Bennett. “The six-month time frame is just a question of which pool we are going to have.”

Bennett is in the process of recruiting new board members with fundraising capacity for Minneapolis Swims; the group has a number of fundraisers in the works. 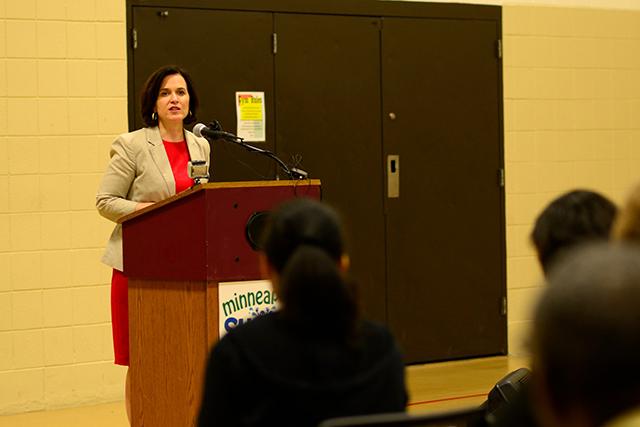 Photo by Greg Abbott
Minneapolis mayor Betsy Hodges spoke at an April event for the pool, but has been reluctant to provide city funding.

He is disappointed, however, that he has been unable to secure a meeting with Minneapolis Mayor Betsy Hodges. Hodges acted as a host for the April community event where it was announced the project was moving forward, but several City Council members failed to get the mayor to agree to a city contribution of $3 million, according to Bennett. A mayoral representative said that Hodges feels that the requested contribution is a lot of money, especially for a non-city project. Instead, the mayor has reached out to private sources of funding for the pool.

Whatever facility is built, Minneapolis Swims has ceded its operation to the Park Board. The all-volunteer organization will focus on community programming and raising scholarship money.

Fundraising is slated to end in March. Construction will take place within two years of that time.

It’s been a very long slog, but swimming equity gets a boost with new pool plans