News
Learning Curve
MinnPost’s education reporting is made possible by a grant from the Bush Foundation.
Sept. 18, 2014 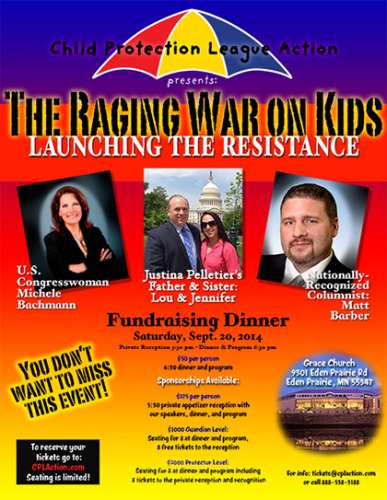 Remember the red-hot battle over the Anoka-Hennepin School District’s efforts to combat bullying of LGBT students? The one that drew national attention when the district was named a suicide contagion area?

Two and a half years after the landmark settlement of a civil-rights suit brought by students, religious-right activists are stoking the embers. An outgrowth of the Parents Action League, the group that for well over a decade lobbied against protections for gay and lesbian students, the Minnesota Child Protection League is a campaign against the rollout of the state’s anti-bullying law, the Safe and Supportive Schools Act, signed into law last spring.

On Saturday, Rep. Michele Bachmann is scheduled to emcee a fundraiser for the organization. On Monday members of the group are expected to pack the district’s school board meeting to speak against the adoption of a long-sought LGBT-affirming policy.

The fundraiser, “The Raging War on Kids: Launching the Resistance,” will also feature the parents of a Massachusetts teen at the center of a high-profile “medical child abuse” case. Recast as “indoctrination,” LGBT rights have been rolled into an agenda of issues where Bachmann and supporters believe their religious freedoms are being eroded.

For families and teachers in Anoka-Hennepin, it’s just the latest salvo in a painful struggle that reaches back two decades. From virtually the moment the district announced the March 2013 agreement that ended the federal suit and investigations by the U.S. departments of Justice and Education, parents and teachers have complained that implementation is all over the map.

Some schools have charged headlong into creating inclusive environments, they say, while in others staff still fear addressing issues involving students’ perceived gender or sexual orientation. Confusion as to what teachers and other adults may say to students persists in many places, they say.

The Bush Foundation recently awarded the district $200,000 to replicate successful efforts developed by some schools to train student “bystanders” to set a positive and respectful tone. (The Bush Foundation underwrites MinnPost’s education coverage but is not involved in editorial decisionmaking. The foundation was not consulted or made aware of this story.)

The current flare-up is illustrative of the longer fight. In the months before the district settled the suit, administrators announced the formation of an anti-bullying task force. In July of 2013, the committee delivered nine recommendations to the school board, which pushed the issue down the road.

Eventually, the board asked the task force to come up with “action steps,” which were presented at its August meeting. Recommendation No. 3 calls on the district to “honor and celebrate the contributions of diverse people and families in our community, country, and world, including the LGBT community.”

Striking a note that was heard over and over again during the two-year fight at the Capitol to pass an anti-bullying law, members of the Child Protection League argued that the task force recommendations had nothing to do with harassment.

‘A thinly veiled strategy to indoctrinate’

“It is, rather, a thinly veiled strategy to indoctrinate our children and our community into affirming and celebrating all sexual activities, no matter how morally wrong and unsafe, including activities engaged in by lesbians, gays, bi-sexuals, and transgenders,” a league action alert explained.

“OutFront Minnesota has recently officially announced the newest addition to its list of those to be honored — queers,” it continued. “They continue to push the envelope on who and what we must celebrate, honor and affirm, not for their achievements, but for their choice of sexual behavior.”

For years, the league pushed the district to promote restorative — or “pray away the gay” —   therapy for children confronting issues related to their sexual orientation or gender identity. The congresswoman’s husband, Marcus Bachmann, has claimed success in converting gays to heterosexuality.

It’s unknown whether the board will vote on the task force recommendations Monday; the agenda has not yet been posted.