News
Learning Curve
MinnPost's education reporting is made possible by a grant from the Bush Foundation.
Oct. 16, 2014

There’s an intersection a few blocks west of Motown in southwest Detroit where two historic thoroughfares cross. Half a dozen streets come together at the juncture, but there is no legal way to make a turn or, more confounding, to cross the once majestic Grand River Avenue.

My friend and onetime colleague, artist and photojournalist Bruce Giffin, explains this as we pull up to a haphazard arrangement of concrete culverts. The turn lanes don’t flow into one another and the one-way signs point in contradictory directions. It’s as though whoever planned it was stoned.

Bruce gunned it, slaloming through the maze and bringing his van to rest on a dead-end that’s as much weeds as concrete. The remnant of street is surrounded by vacant lots, which are in turn ringed by giant art installations created by a friend of his, Olayami Dabls, and Dabls’ MBAD African Bead Museum.

I was in Detroit attending a conference for journalists on equity in education. I was there as part of a reporting project that is still taking shape, but that in my mind has to do with resilience. Specifically, with how disadvantaged children persist in unwelcoming schools.

I’ve been thinking a lot about what it must do to a child’s educational trajectory when the thing the adults in a school see first is their race, home language or disability status and — well intended thought their efforts may be — approach the student as a deficit. It’s a hard thing to put into words.

The conference included a session on Detroit’s schools, which have been in and out of state control pretty much since I lived there in the late ’90s. Michigan’s Republican-dominated state government has been essentially waging war on the city ever since, turning the school system into a wild west.

The head of the Detroit Federation of Teachers referred to state policies as “urban pimping.” Seems bang on to me.

Half of Detroit children attend charters, 80 percent of which are owned by for-profit companies operating with virtually no oversight. There’s fraud, but there’s also all kinds of double-dealing that’s not outlawed.

The remaining mainline public schools are not especially better or worse. The school board has its own history of corruption. Pick the conspiracy theory aligned with your ideology and it’s probably playing out in Detroit.

Art from shards and rebar

And yet there is tremendous resilience. Bruce parked us next to Dabls’ N’Kisi Iron House, an abandoned building covered with broken mirrors and tiles and rusted paint cans and innersprings and twisted lengths of rebar jutting out like whiskers.

Several yards away at the end of what used to be an alley is a brick wall stretching 150 feet to the west, where Interstate 96 passes by. Each segment bears symbols from a different African language. 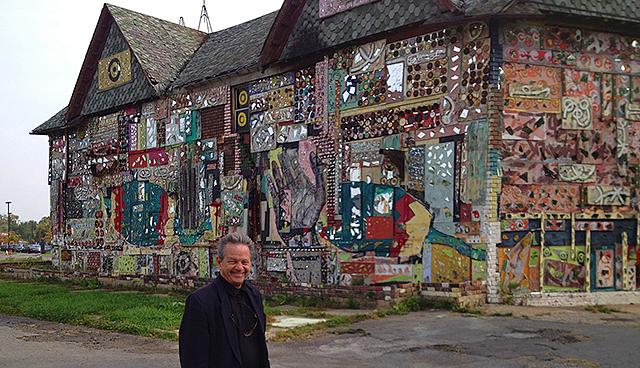 From even just a few feet away the wall appears lacy. Up close, it too turns out to be covered with shards of mirror. People drive by on the sunken freeway and at night their headlights refract off the wall and up into the sky. Hardly anyone knows what’s throwing the light, though, because hardly anyone gets off the freeway.

Vast swaths of this city appear similarly empty. When Bruce and I worked together in the ’90s the population of Detroit was threatening to dip under 1 million, a point at which a number of laws that essentially protected a black city from a hostile white state apparatus would sunset.

Something of a renaissance

Then as now, the city was undergoing something of a renaissance — perhaps better described as the setup for a fresh round of heartbreak. At its apex, 2 million people lived in Detroit. Today, it has fewer than 700,000 people — about as many as in 1910, before the birth of the auto industry drew migrants to the city.

More than a third of the city’s properties have been razed, and a third of those still standing are vacant. Almost 40 percent of the streetlights don’t work. A popular downtown restaurant gets its water from a nearby fire hydrant; the water department refuses to replace the main line behind the building because of the danger posed by bricks falling off the façade of an adjacent building.

Bruce has spent 30 years driving these streets looking for images that catch his eye. He photographs a lot of survivors — children who live in the plume from a wastewater treatment plant and a paraplegic who uses his arms to haul himself up the stairs of the abandoned building where he lives. 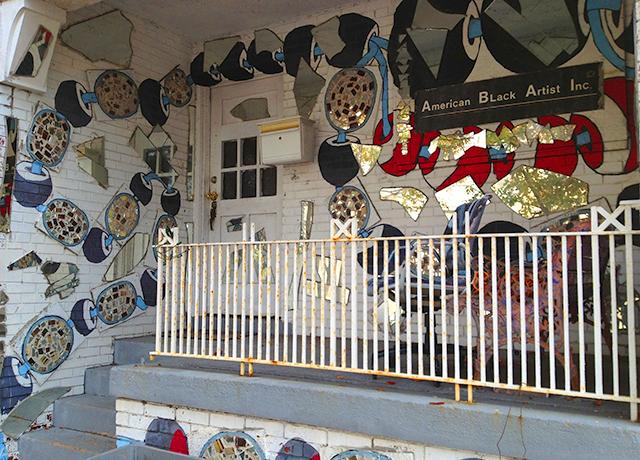 In 2011, he and Dabls were both selected for the prestigious Kresge Artist Fellowship, a modest amount of money Bruce describes as “life changing.” The Kresge Foundation also funds arts initiatives elsewhere, including Minneapolis’ Intermedia Arts, as well as an education reform effort called Excellent Schools Detroit, which is somewhat akin to our Generation Next.

The arts scene here is thriving. In fact, if you engage a Detroiter on the city’s welfare they’re less likely to talk to you about the bankruptcy than they are the catalyst for growth the arts have been; the largesse of Dan Gilbert, the Quicken Loans founder who has bought up half the city for the better; or the new Whole Foods. (Farms have sprung up on vacant tracts, but the city hasn’t had a grocery store for 20 years.)

We stopped at a Starbucks next to the Whole Foods to get Dabls a coffee, but he hadn’t arrived to open his bead museum for the day. Which is a shame, because the third installation on the weedy lots is a mind-blower.

‘Iron Teaching Rocks How to Rust’

“Iron Teaching Rocks How to Rust” is about assimilation. As in the other parts of the installation, the rocks — chunks of broken concrete — seated in rows in “Classroom for Rocks” have kinky hair painted on. They are learning, the artist has explained, how to deteriorate.

“It’s dealing with the social/political situation that we find ourselves in here in America,” Dabls explained to DetroitBlog. “Because of the unusual way in which we came here, internally we did not bring any cultural information with us. So coming out of slavery, of being enslaved rather, we mimic the European culture. Our goal was to be included. So we’ve tried that, it did not work, so we’re at a stage in our history at this point in time where we began to say ‘OK, I need to know something about Africa.’” 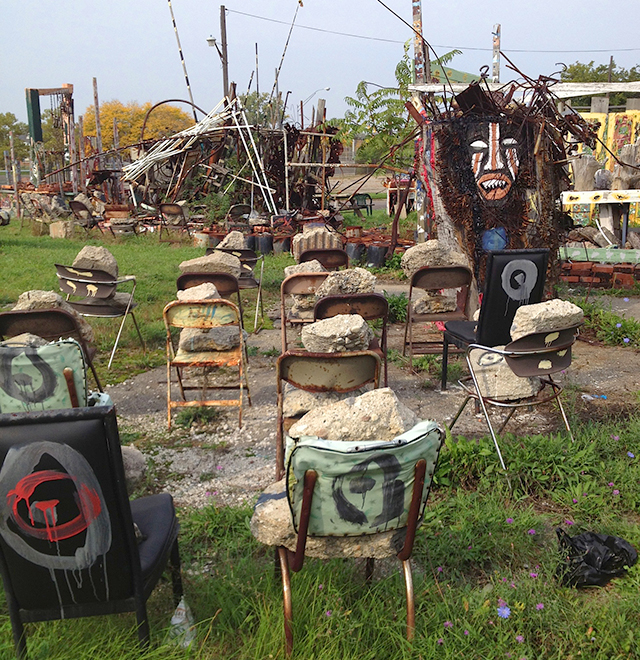 MinnPost photo by Beth Hawkins
The installation “Iron Teaching Rocks How to Rust” is about assimilation.

There’s a portion representing slaves who died trying to escape slave ships, a school bus and a diorama — complete with a concrete wedding cake — of “Iron Teaching Rocks Table Manners.” Maybe because you can’t see it from the freeway and you can’t get to it from the street, it feels like the artist meant for people to experience the serendipity of stumbling onto it.

The previous night the event planner who organized the conference I was attending, who could not stand the idea that a dozen writers might go home and say bad things about Detroit, organized a walking tour of the last stops on the Underground Railway.

Our tour guide was the fifth-generation descendant of a freedom-seeker named Allen Watkins, who was born in Richmond, Virginia. In the tradition of oral histories, she grew up hearing his story repeated so often she memorized every date and place in the journey.

Watkins was married twice, the first time to another slave who bore five children before being sold away from her family. She drowned herself in sorrow.

With three children under the age of 10 in tow, Watkins made his way to Detroit where his penultimate stop was the Second Baptist Church downtown. (It was the second, because it was given to Detroit’s then very small black population, which wasn’t allowed to sit during services at First Baptist.) 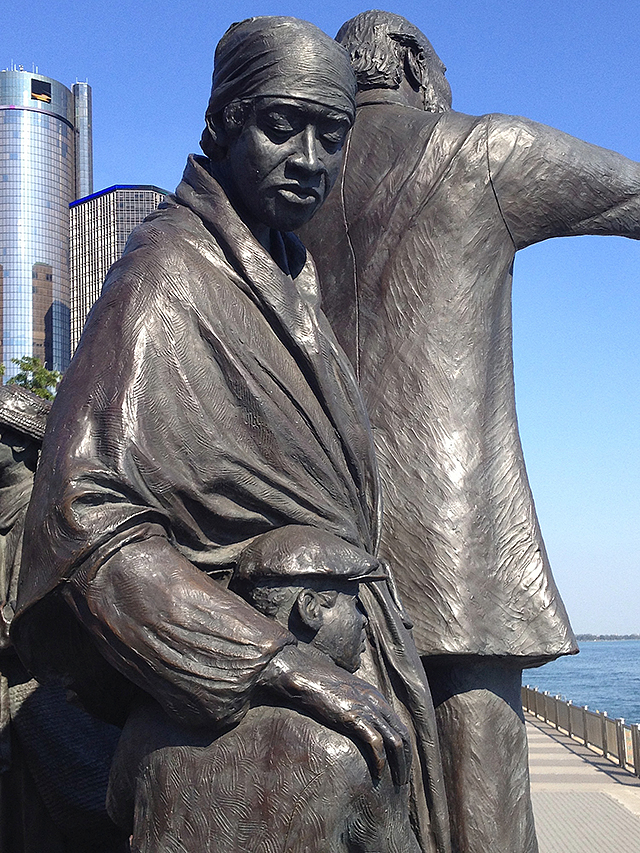 MinnPost photo by Beth Hawkins
A detail of a statue honoring the end point of the Underground Railroad.

The ferry landing where people would cross the wide Detroit River is just a few blocks away, but the route was often thick with bounty hunters sent to retrieve “property.” A freedom-seeker who made it through that gantlet still faced the dangers of the crossing. Many tried to swim or wade and died.

Watkins and his babies made it. He remarried to a woman who made the journey with the help of a Wisconsin abolitionist who, 35 years later, wanted to know how the story turned out. Their correspondence — discovered 16 years ago — makes his one of the best-documented escapes via the railroad.

So why am I telling you about my field trips? Because educators and education policymakers talk all the time about persistence and grit and culturally relevant pedagogy. And yet how much more could we do if we looked at our neediest students through a prism that started with their inherent resilience and the gifts their experiences have imparted?

I’ll be back in Detroit next week. Bruce has volunteered to stuff as many education writers as can fit into his van for a visit to “Iron Teaching Rocks How to Rust.” I say we take him up on it.

Detroit and needy schoolkids: What if we saw resilience first, instead of deficits?