News
Learning Curve
MinnPost’s education reporting is made possible by a grant from the Bush Foundation.
Dec. 4, 2014

On a recent Wednesday morning, 11th-grader Sophia Wellington took to the undersized stage at the front of her high school gym and with seamless poise demonstrated what smarter student assessment could look like.

She began by introducing herself to a group of visitors to her school, Impact Academy of Arts and Technology in Hayward, California. She is 15, has a desire to travel and is “into bands.” She wants to go to a good University of California system school, preferably Los Angeles or Berkeley.

Whereupon Wellington showed, without dropping so much as an “um” or a “like,” how she will prove she has the intellectual skills and the grit to get there.

Clicking a PowerPoint to life, Wellington paged through a portfolio of work she believed showed she was ready to move from the school’s ninth- and 10th-grade lower division to the upper. The Holocaust, she told her audience by way of example, is an ever-present reminder to contemporary leaders that history should not be allowed to repeat itself.

During World War II no nation wanted to intervene when Germany occupied Czechoslovakia, Wellington explained. Avoiding a repeat of the horror that ensued is one reason why the United States was quick to react when Russia tried to take over Crimea in the Ukraine.

“Although most of us want to avoid genocide, it still happens today because of indifference, desire for power and hatred towards one another,” Wellington said, narrating an excerpt of her writing. “America is trying to stop what could get out of hand in the future rather than have it linger on and more people suffer.”

Wellington will have to compile another portfolio and defend its contents again as a senior in order to graduate. Called a performance assessment, the exercise is designed to gauge her readiness for college.

It’s not easy. Some 40 percent of Impact’s seniors are asked to revise their work after their first dissertation-style defense to a panel that includes teachers, other students and even parents and community members. They pass or fail depending on how well the presentations satisfy a rubric created by Stanford University.

With implementation of the more demanding, complex Common Core academic standards under way in most states and dissatisfaction with standardized bubble tests on the rise, states and school districts are in search of ways to drive and assess deeper learning.

A growing body of research suggests that few of the questions on even the most rigorous traditional, multiple-choice tests assess higher-level skills such as analyzing, explaining or synthesizing. In part because of the associated stakes, they do, however, drive instruction.

Learning by doing — and showing

Better, argue the scholars who helped design the performance assessments Wellington and her classmates work toward every day, is an evaluation tool that pushes students to learn by doing, and then to show their knowledge and how they acquired it.

“Researchers argue that, by tapping into students’ advanced thinking skills and abilities to explain their thinking, performance assessments yield a more complete picture of students’ strengths and weaknesses,” the Stanford Center for Opportunity Policy in Education’s Linda Darling-Hammond and Frank Adamson noted in a 2010 paper.

“By giving teachers a role in scoring essays and other performance measures, the way the Advanced Placement and International Baccalaureate programs do today, performance-oriented assessments encourage teachers to teach the skills measured by the assessments and help teachers learn how to do so,” the paper continued. “Such measures would, in other words, focus attention more directly on the improvement of classroom instruction than [No Child Left Behind] has done.”

A number of Minnesota schools use approaches similar to Impact Academy’s, coupling project-based learning with a graduation portfolio or presentation. Like the California school, their students also take the state standardized tests called for by federal law.

Located in St. Paul, Avalon frequently hosts visitors from around the world who are interested in its teacher-led governance model. In keeping with the school’s philosophy, its teachers have translated Minnesota’s high school standards into plain-English objectives students can fulfill in a variety of ways in order to graduate.

Avalon and Impact Academy are among a number of “deeper learning” programs profiled in a recent book on the topic; video from both can be viewed on an associated website. 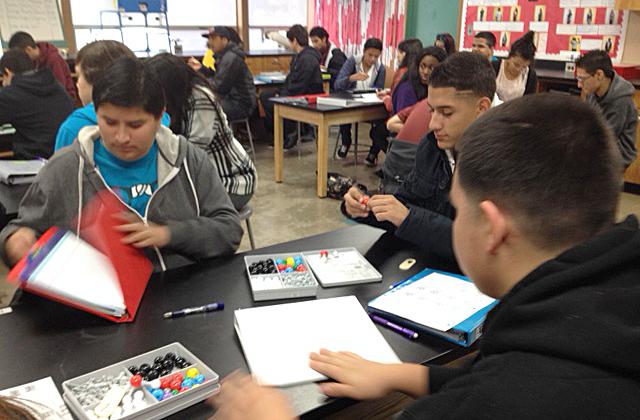 Other schools employing the model include the public charter High School for the Recording Arts, in St. Paul, and Henderson’s Minnesota New Country School, possibly best known outside education circles as the one whose students discovered deformed frogs. New Country students create their own rubrics, which must display “brain strain.”

Part of St. Paul Public Schools (and full disclosure: the author’s alma mater), Open World Learning Community goes a step further and uses standards-based grading in the years before students create graduation portfolios. Teachers have produced a detailed guide to grading that’s not unlike the performance assessments Stanford helped to validate at the Bay Area programs.

How did the 7-year-old Impact Academy come to be one of the idea’s proving grounds? Its project-based approach to instruction, relatively uncommon in U.S. schools, is well suited to the deeper learning the higher-level assessments can measure, according to school founder Bob Lenz.

In 1992 Lenz was a teacher-leader at a Bay Area school that got a federal grant to counter plummeting enrollment by implement project-based learning, an approach in which students “learn by doing.” The change succeeded in revitalizing the school.

“People believed we were successful because we were working with middle-class white kids in Marin County,” he says. “And frankly I got tired of hearing it. I didn’t believe it.”

In 2002, Lenz founded Envision Schools to bring the approach to students who were likely to be the first in their family to go to college. Kids from families with no history with college are far less likely than their affluent peers to persist past their first year.

Today, Envision consists of a three-school network of Bay Area public charters and a consulting division that works with hundreds of schools in eight states. Early results are promising.

Two-thirds of Impact’s 465 students quality for free- or reduced-price lunch and 70 percent would be the first in their family to go to college. Three-fourths are Latino or African-American.

On average, students are reading two grade levels behind when they start ninth grade. Fewer than one in five is proficient in algebra.

Just 10 percent of youth from this demographic who make it to college re-enroll for a second and third year. Persistence rates among students who start at four-year colleges and universities are much higher than those who begin their studies at two-year institutions.

90 percent go on to higher ed

Beginning with its first graduating class in 2012, all of Impact’s graduates meet the stringent entrance requirements for California’s four-year public colleges. Ninety percent go on to higher ed, with 70 percent enrolling in a four-year school.

And Impact is refining as it grows up: 70 percent of the 2008 and 2009 classes have either graduated from college or are still working toward a degree. The rate has risen to 85 percent for subsequent classes. 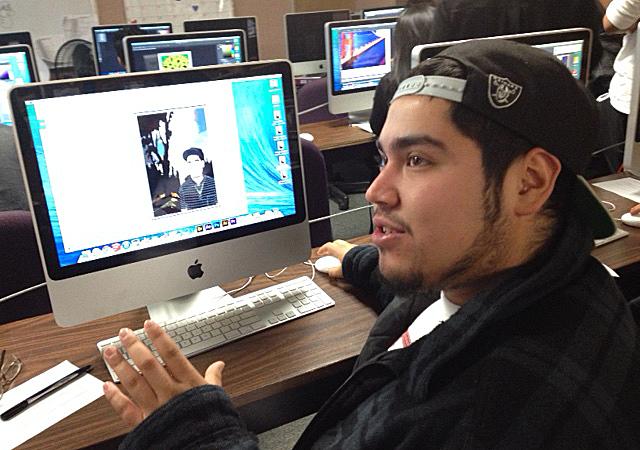 Impact Principal Sean McClung attribute graduates’ ability to stay in college to the school’s “culture of revision.” Among other elements, a graduation portfolio contains five “artifacts,” for example. Students work on at least two a year for two years.

“We don’t just give you a D and move on,” says McClung. “We give you support to do better.”

In teacher Lindsey Dodge’s 12th grade advanced digital-media arts class, Daniel Zamora spent the fall working on a self-portrait and accompanying artist’s statement that must showcase his skills in a range of areas, including art history and self-expression.

With a monochromatic palette, the digital portrait depicts Zamora as moodier than he seems in real life. The work was inspired by the styles of Renaissance painters.

Must show mastery in four areas

Like his classmate Wellington, Zamora’s senior presentation will have to showcase mastery in four areas: research, inquiry, analysis and creative expression. They must display their sources of information and their evaluation of their credibility.

As he works, Zamora exchanges feedback via instant messages with a classmate. He won’t have to present the portrait-and-essay combo until next spring, and he is not worried about scrutiny.

“We practice a lot,” says Zamora. “I’m not afraid of it anymore.” 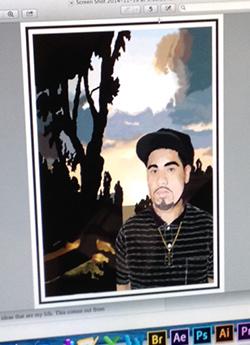 MinnPost photo by Beth Hawkins
The digital portrait depicts Daniel Zamora as
moodier than he seems in real life.

Lead 10th-grade teacher Abby Benedetto also is enthusiastic about this kind of “teaching to the test.”

“It’s why I work at Envision,” she says. “I am far more convinced my students will be successful in college. Their essays show critical thinking, higher-level thinking.”

Which is what the Common Core State Standards in language arts and math will require of students and teachers, notes Envision founder Lenz. In addition to their own performance assessments, his schools must soon begin administering corresponding, much more rigorous exams. The schools’ approach should help there, too.

“As we move to Common Core and [tests from the] Smarter Balanced Assessment Consortium, we’re going to hit a wall,” says Lenz. “When you have a teacher who has 180 kids and they’re rotating through in 50-minute periods, when is that deeper learning going to take place?”

Since Wellington is in the 11th grade, in the spring she will take a new set of California state standardized exams. She’s not nervous, but she’s also clear the results won’t mean as much to her as the feedback she will get on her performance portfolio.

“I’m a good test-taker,” says Wellington. “But I don’t know that I get anything out of the standardized tests.”

This article is reprinted with permission from the Education Writers Association.

How student portfolios can lead to deeper learning — and to college