News
Learning Curve
MinnPost’s education reporting is made possible by a grant from the Bush Foundation.
Dec. 12, 2014

Here is an ugly thought I have been holding at bay for a few months: What if we — and by we I mean the public officials, taxpayers, families, educators and others who make up Minneapolis — are in the process of squandering the collective sense of urgency we’ve been creating around equity in education?

Superintendent Bernadeia Johnson is fond of saying that culture will eat strategy for lunch. What if the culture she has been trying, with broad swaths of the city behind her, to change for four years has taken a final, fatal bite of her once-bold strategy?

That’s the question I had when I saw the most recent annual report on academic progress, which was presented to the Minneapolis School Board earlier this week. The presentation dispensed with the bad news in two broad-overview PowerPoint slides labeled “Incremental District Progress” and “Significant Disparities Exist.” The appendix containing the Dickensian fine print was not discussed, just uploaded to the board’s online agenda where those in the know can find it.

Here are some of its unpalatable truths: 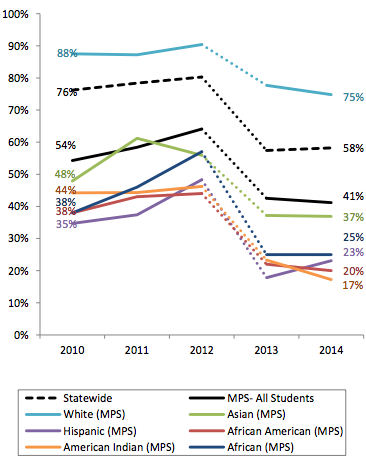 Third grade is the time by which basic literacy is required if a student is to stand a chance of keeping up in other subjects. One in six Native American third-graders now reads at grade level vs. 44 percent in 2010. One in five African American third-graders are proficient, as are 23 percent and 24 percent of Latinos and Africans, respectively.

Yes, reading scores fell statewide two years ago because of the implementation of higher standards. But they fell less for white students than for students of color and American Indians. And it doesn’t necessarily mean the proficient students are brilliant — it simply means they are on track to be prepared to start college.

With the exception of a four-point uptick for Native Americans, literacy does not rise as students go from grade to grade. Reading proficiency in all grades is 10 percent for English-language learners, 15 percent for special education students and 23 percent for students in poverty.

Math is a tiny bit better; science is actually worse, with some proficiency rates in the single-digits.

The percentage of students scoring a 21 or better on the college admissions ACT test is 35. District materials explain that this is the national average and the score needed to qualify for admission to a state college, but University of Minnesota figures show that the average scores for those entering its academic colleges in 2014 range from 25 to 31.

Just 13 percent of impoverished students, 11 percent of African Americans, 10 percent of Latinos and 1 percent of English-language-learners score 21 on the ACT.

Thirty-four of the district’s 70 schools are in one of the three federally defined categories of schools that persistently fail their students. MPS’ alternative learning centers graduate 14 percent of their students. Wellstone International graduates 10 percent.

The presentation came at the end of a marathon board meeting — the last for three of its members— at which a majority voted itself a modest pay increase. Johnson was under the weather and not in attendance.

Her absence was palpable. When Johnson’s tenure as superintendent began, an outside consultant warned that MPS administration was best viewed as a series of “silos” whose occupants did not communicate with one another and were ambivalent about their leader’s vision.

That ambivalence stretched down through the ranks to the classroom level. Some teachers and principals have embraced Johnson’s goal of using data to drive effective instruction while others — half by some accounts — have simply ignored the initiative.

When last year’s dismal report was tendered, Johnson announced a “more focused” strategy that would lean heavily on early literacy and place co-teachers in classrooms in struggling schools. A team of associate superintendents would work closely with schools to see that proven gap-closing strategies were implemented.

Instead of reviewing this year’s dismal numbers, district brass Tuesday night focused on a list of interventions planned or underway. There’s no reason to doubt the leaders presenting the strategies have the capacity to implement them — except for past experience.

The penultimate slide in the presentation was entitled “Meaningful Change Takes Time and Dedicated Effort.” The associated graphic was a chart depicting eight steps toward organizational change that dipped precipitously at the halfway point, labeled “period of disruption,” which followed “sense of urgency” and “resistance.” 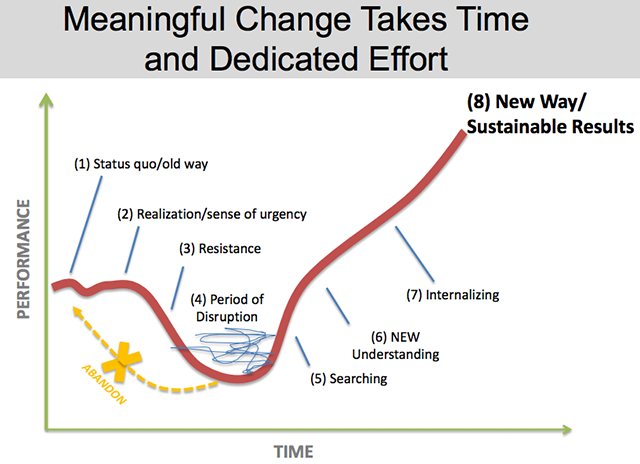 A yellow arrow at the bottom of the curve — a perhaps-unfortunate adaptation of Elizabeth Kubler-Ross’ famed stages of death and dying — suggested that the alternative to pushing through to a “new way” was to abandon the shift and return to the status quo.

The disruption, CEO Michael Goar explained, is a systemic change that threatens MPS’ central office bureaucracy. The smaller the administrative staff, the larger the share of its $250 million cost that can be directed to schools empowered to make their own decisions about how to spend it.

The notion that it might be a watershed moment rings true. What if we have announced the same bold plan and failed to implement it so many times that the vision has lost its luster — and more problematic, the sense of possibility?

The room was packed with talent and leadership at last lined up behind a more unified vision. Whether it’s one shared by the board seated next month remains to be seen.