News
Learning Curve
MinnPost's education reporting is made possible by a grant from the Bush Foundation.
Jan. 26, 2015 In high school, Latasha Gandy was an academic star. She had a GPA of 4.2 and graduated second in her class from St. Paul Public Schools’ now-defunct Arlington High School.

But when Gandy went to enroll in college, she got a rude surprise. She needed to retake classes she’d aced in high school. She needed a costly year and a half of English and more than a year of math — for no credit.

“I remember feeling when I made it there like, 'How can this happen?' ” says Gandy. “I had all these thoughts about did I belong here? And everything I was hearing from my community about black people didn’t go to college.”

Not only would Gandy have to pay for the remedial, or “developmental,” classes, she wouldn’t get any credit. So there’d be no chance she could graduate in four years — especially problematic since she has two daughters to support.

Gandy eventually made it through, earning an associate’s degree as a paralegal at Inver Hills Community College and a B.A. in legal studies at Metropolitan State University. But at tremendous expense.

By the time she was a senior in college Gandy had maxed out her student loans — a level of indebtedness that’s not supposed to be necessary at state schools.

Last week Gandy told her story at a hearing of the state House of Representatives K-12 Education Finance Committee. Now the Minnesota managing director for Students for Education Reform (SFER), she asked the lawmakers to address the problem.

Hers is not an unusual story. Indeed in some respects what’s most noteworthy about it is that Gandy persisted until she earned her degree.

A MinnPost analysis of state data [PDF] found that between 2006 and 2012, the most recent year for which figures are available, at least one in four Minnesota public-high-school graduates who went to Minnesota colleges/universities needed remedial classes there.

(These figures do not include students who took two or more years off before entering college and students who graduated from high schools serving fewer than 100 students. Students included in the report may have graduated after more than four years of high school. Also, because of student privacy regulations, there is no data for years in which fewer than 10 students required remedial classes.)

Remediation that took place at colleges outside Minnesota also is not included.)

Averaged over the seven years in question, the mean rate for high schools is 28 percent, according to data in the Minnesota Statewide Longitudinal Education Data System (SLEDS) report. In Minneapolis, the mean was 40 percent; in St. Paul it’s 37 percent. Black graduates are twice as likely to be placed in remediation as their white peers, the report says.

The outliers on it are not unexpected. Represented in dark blue on the far left of the graph, the schools with the lowest remediation rates were Edina, Sartell and Jefferson High, at 14 percent each. On the other extreme are a number of very high poverty schools and programs for students who haven’t succeeded in mainline high schools. The highest average remediation rate is 72 percent at St. Paul’s City Academy.

The map is a stark visual reminder that the issue of underpreparedness is not contained to the high-poverty, high-needs schools that are typically associated with headlines about learning gaps. In half of Minnesota high schools — many of them desirable programs — one-fourth to one-third of graduates needed remediation.

Add to this the fact that Minnesota is fifth in the nation in terms of student debt. Almost three-fourths of students here carry loans. The average indebtedness for students attending a public school is $31,000.

Nationwide, some 1.7 million students a year need remediation upon entering college at an estimated cost of $3 billion. More than half of students entering two-year colleges and nearly 20 percent of those entering four-year schools are placed in the classes.

Worse, there’s data suggesting that far from positioning students to succeed, remedial classes function as what the nonprofit Complete College America calls a “Bridge to Nowhere.”

Nearly four in 10 students who take remedial courses at community colleges never finish the preparatory classes. And 30 percent of students who take them at any institution don’t go on to take entry-level, or “gateway,” classes within two years.

Nor does time seem to help. Given three years to finish community college, fewer than one in 10 remedial students graduate. A little more than a third finish a bachelor’s degree in six years.

Students profiled in a MinnPost story on a related issue last week illustrated the endless twists and complications that can make remediation the final straw. For some, remediation could mean an end to county benefits that allow them to support children of their own or throw their immigration status under the DREAM Act into doubt.

The little discussed problem is where pressure resulting from two different sets of policy changes meet. With costs soaring, higher education is under pressure to increase college completion rates. The easiest way to do that is to raise the bar for admissions so that fewer students are enrolled for years on end.

At the same time, K-12 education is in the sometimes painful throes of embracing academic standards. The highest profile of these efforts is the Common Core State Standards, an effort to specify what students at different grade levels should know.

Like their counterparts elsewhere, traditionally high schools in Minnesota have graduated students who earned a particular number of credits. The value of the diplomas they earned, many felt, varied along with the rigor of their high school programming.

The same controversy was under discussion in a number of states, with many policymakers convinced that the answer were standards: guidelines for what knowledge students should be able to demonstrate at different grade levels.

In 1998, Minnesota enacted a first set of academic standards known as the Profiles of Learning. In addition to being assessed to see whether they knew the content of the standards, students would have to pass basic skills tests to graduate. (Plagued by problems, the exit exams were abolished two years ago by the Legislature.)

By law the standards are reviewed every four years. Several years ago Minnesota adopted math standards that are substantially equivalent to the Common Core State Standards, a joint effort by many states to create a uniform level of rigor.

Eliminating the gap between what a high school graduate has learned and what they should know to succeed in college is one of the main aims of Common Core. When Minnesota adopted the standards in English language arts two years ago, scores on state reading exams fell sharply.

In theory, going forward high schoolers who do well on tests that measure the new standards should ace the placement exam the Minnesota State Colleges and Universities System (MNSCU) uses to determine whether entering students need remedial coursework.

In the past, inconsistent adoption

It remains to be seen, however, how enthusiastically and evenly the standards will be adopted. For instance, concerned that high school students were not performing well, a year and a half ago the Winona Area Public Schools board commissioned a survey that found that most courses were “in progress.” That meant educators had not yet matched the curriculum they were teaching to the standards. Board members complained that in many cases the process was taking years.

At the same time, higher-ed policymakers need there to be room for all students to attempt college. Minnesota’s two-year institutions very deliberately enroll anyone with a diploma, regardless of how prepared they may be.

In addition to increasing high school rigor, one solution is to expose students to college-level coursework before they graduate. St. Paul’s Center for School Change has fresh research showing the value of this approach.

Another promising strategy is to do away with remedial courses and instead offer underprepared students “co-requisite” support — built-in tutoring, extra instruction — that will enable them to pass entry-level credit-bearing college classes.

Florida recently did away with remedial ed entirely. Programs in Maryland, Tennessee and Texas have had success with the co-requisite model, the one Gandy and her fellow student advocates want Minnesota lawmakers to consider.

The president of SFER’s University of Minnesota chapter, Ramon Page, also testified at the House hearing last week. “I joined SFER because I barely made it out of our current education system and have seen too many friends and family members fall through the cracks of the achievement gap,” he said. 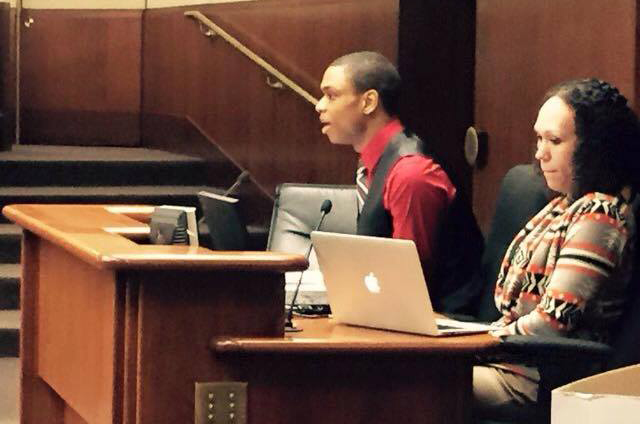 Courtesy of SFER
Ramon Page and Latasha Gandy testify at a House hearing.

The summer after he graduated from St. Paul’s Humboldt Senior High School, Page spent six weeks attending a costly college-prep program. That allowed him to gain admission to Mankato State University, where he spent his first semester in remedial courses.

Page wanted the lawmakers to know how daunting bridging the gap between high school and college was.

“You see remediation, despite its intentions to prepare students for college, is built on a foundation of low expectations for students like myself in high school,” Page said. “Then students are forced to foot the bill, and we are standing up now and saying no. We can no longer suffer the consequences by the system's failure.”