News
Learning Curve
MinnPost’s education reporting is made possible by a grant from the Bush Foundation.
March 4, 2015 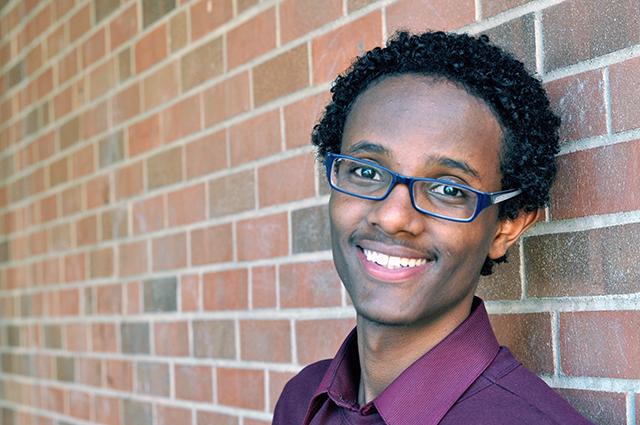 Photo by Molly Jade Photography
Walid Abubakar: “It never occurred to me someone would hear my story and think of it as a strength.”

When Walid Abubakar began thinking about paying for college, he budgeted for textbooks, transportation, living expenses — all of the usual stuff. And then he thought long and hard about the $300 to $400 a month he has been sending his family in Ethiopia.

Remittances — the money immigrants send from their new, more prosperous home — are life-changing to the family members who get them, but they’re not the lynchpin for a stable household budget, much less the cornerstone of a healthy national economy.

Anxious though he is to improve things in East Africa, Abubakar, who is Oromo, doesn’t think continuing to send money indefinitely is the healthiest way to help. At the same time, he can’t abandon his relatives.

His father transports potatoes from Somalia to Ethiopia along a road frequently ambushed by the militant group Al-Shabaab, a job that allows the family to subsist. Most of the money Walid sends pays for his sisters to go to school.

And so Abubakar, who is a senior at Ubah Medical Academy in Hopkins, has a plan to set his father up in a sustainable business while he, Abubakar, goes to college. He’s considering becoming either an engineer or a pharmacist — both professions that could make a critical difference in Ethiopia.

Encouraged to write about background

The plan existed only in Abubakar’s mind until recently, when a coach he works with through the St. Paul-based national nonprofit College Possible cajoled him into writing an essay about his journey from a refugee camp to academic success here. He was going to need scholarships, lots and lots of scholarships, and a “special circumstance” letter would go a long way toward securing them.

He was working on an application for the very competitive National Horatio Alger Scholarship when Grace Fowler, the coach who has worked with him for two years, glanced over his shoulder. “I was sitting in the computer lab thinking about how many students across the country were applying for this,” he recalls. “She said, ‘I know you can go deeper than that, Walid.’”

Abubakar was surprised. He had thought his background was a complicated liability: “It never occurred to me someone would hear my story and think of it as a strength.”

Right after the holidays Abubakar learned he was one of 100 students chosen for the prestigious scholarship. That means he has a minimum of $22,000 to put toward college — a sum colleges that partner with the program will match.

He has also heard back from eight of the 10 colleges he applied to that any would be happy to admit him and one, St. John’s University, has offered him a $20,000 presidential scholarship. (The two holdouts: Macalester and Carleton colleges, two of Abubakar’s top three choices.)

Launched 15 years ago by Jim McCorkell, who had a lot of help getting from a low-income background to first Carleton and then Harvard, College Possible recruits low-income high school sophomores with GPAs of 2.5 or higher — frequently the first in their families to even consider college — and provides intensive coaching until they have completed a degree.

Upper-income students are almost 10 times more likely to earn a degree, College Possible Twin Cities Executive Director Sara Dziuk notes: “The injustice of this gap is staggering and it’s hurting our economy. … The perseverance these students demonstrate once they see what’s possible is awe-inspiring and we are thrilled by the opportunity to reach more of them.” 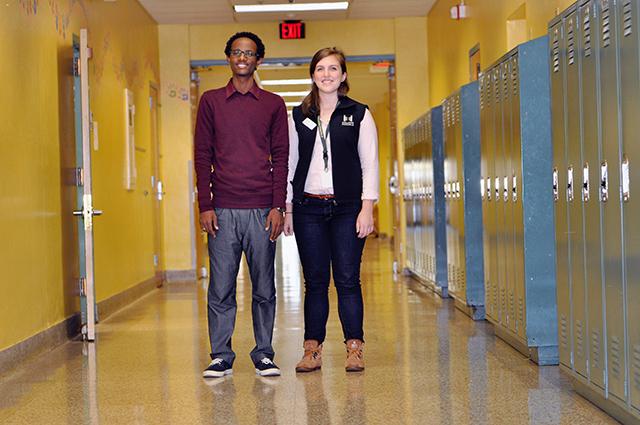 The organization serves more than 15,000 students in 45 high schools and numerous colleges. This year it is working with more than 11,000 Minnesota youth. Participants are 10 times more likely than their peers to complete college, according to a study recently released by researchers at Harvard University.

At a White House summit held in December, College Possible announced plans to increase its capacity to serve 20,000 students in 10 cities by 2020. It’s not the first time the program, which used to be known as Admission Possible, has earned a shout-out from President Barack Obama.

Coaches, all of them AmeriCorps members, meet for two hours with high school students twice a week. By the time students graduate they have received 320 hours of support.

Among other things, juniors prepare for and take the ACT and SAT to get an idea where they are versus where they want to be. They then get intensive support working to increase their scores and find the enrichment opportunities colleges also look for.

As seniors, participants apply to colleges and for financial aid. As college students, they get ongoing help navigating personal finance and the other obstacles that can get in the way of completion.

Abubakar had set himself a high bar even before he found out about College Possible, but he was unsure how to vault it. When a coach from the program visited his class two years ago, he was determined to get in.

“The whole organization is for people who need support for college readiness and the ACT, and those are definitely the kinds of support I wouldn’t have. Considering I didn’t have much parenting, the coaches kind of take over that role.”

For the most part, Abubakar has managed his life and education without the adult support most students count on. Eleven years ago when Ethiopia was at war with Somalia his family lived in a refugee camp. The resettlement program they were eligible for could not move everyone, so the two oldest children, Abubakar and his sister, came to the United States with two aunts.

Abubakar had never been to school and spoke no English when he entered Minneapolis’ Anne Sullivan. He struggled there and decided on his own — his aunts were in no better position to navigate the school system — to switch schools in fourth grade to a program with a science and technology focus.

“If you ask any African parent, over anything you [should become] an engineer or a doctor,” he explains. “Considering Africa is not a very developed continent, resources like those are what people need.”

Abubakar did well in school, but felt isolated. When high school came around he enrolled himself at Ubah, where a majority of students are African immigrants.

When he heard about College Possible he had the same reservations that haunted him when he began applying for scholarships. He works full time as a security guard — he lives in his own apartment in St. Louis Park — and would need to leave one of the two weekly sessions a few minutes early.

A disappointing score — and a strategy

Fowler didn’t blink. Nor did she try to temper his aspirations — an all-too-frequent occurrence in high school guidance offices. She did push him to take the ACT, and invited him to spend his lunch hour in her room after he learned got a 19.

“I was devastated,” says Abubakar. He had already dared dream much higher than that.

“This is not a reflection of your intelligence,” Fowler told him. “This is something else.” She outlined a strategy for getting the 25 he would eventually need: Starting with his lowest score and moving toward the highest, work on getting ahead in each subject area.

Increasing his academic qualifications wasn’t as daunting as thinking about the money. “We did a lot of sessions on how much it would cost,” Abubakar says. “I knew there would be a lot of scholarships out there, so I let myself dream big.”

He wrote essay after essay after essay — eight for the Gates Millennium Scholarship alone and an especially close to his heart one to Macalester about his dream of participating in the college’s strong campus interfaith groups. (Abubakar is Muslim, and would like to help put an end to American stereotypes of Islam.)

Abubakar was managing everything — living independently, working full time and sending money home, raising his grades and taking honors courses and applying to colleges — when his mother died. She passed suddenly and without explanation; because Ethiopia lacks health care, disease goes undiagnosed, he explains.

Here, too, Fowler was a safety net: “She made it as easy as possible for me to be here and to be myself.”

Abubakar’s story is unique, but the obstacles between him and a college degree are not. By using the AmeriCorps model, College Possible is able to serve students in five cities for one-seventh the cost of similar efforts. A whopping 98 percent of participants are admitted to college, which they are overwhelmingly likely to complete.

In January the group was rewarded with one of 26 U.S. Department of Education Investing in Innovation grants for $3 million to help with the planned expansion.

When he is done with college Abubakar would like to go back to Ethiopia to help. But he’d like to make something of himself here first, so that much as he plans to turn his remittances into capital for a family business, he can help others gain the skills to build a stronger economy.

“Looking back on my background and where I come from, there are not a lot of people who are educated,” says Abubakar. “My parents, the highest education they got was the elementary level.

“There are very few who got to go to college and do something for the community one day,” he adds. “I want to do that for myself and for my generation.”

With grit and girded by College Possible, young immigrant makes his way