News
Learning Curve
MinnPost’s education reporting is made possible by a grant from the Bush Foundation.
April 2, 2015

Oh, to have been a fly on the wall the day last fall when Monica Fabre was persuaded to take over Minneapolis Public Schools’ toughest building.

Fabre came to the district’s attention last year after the dramatic turnaround of the impoverished, embattled Louisiana school where she was principal. She was coaxed into visiting Harrison Education Center, the program that serves the Minneapolis high school students with the most severe emotional and behavioral issues.

“It was the eyes of the students at the table that got me,” says Fabre. In particular one young woman who wanted to know what the prospective principal’s experience teaching kids with the girl’s special education label was.

“That floored me — the self-labeling,” she says. “Many of our students, especially African-American males, have been taught from a very young age that men don’t cry. So they are acting out in the only way they can.”

An Army vet, Fabre was driving a forklift when a sixth-grade teacher told her that her son wasn’t learning because he was “slow.” The process of learning to advocate for the boy drove her back to college first for a teaching credential and then for two master’s degrees and a PhD.

Since the first of the year Fabre has been making changes at Harrison and planning for a top-to-bottom redesign, and even some hardened critics are taking note. Yet as impressed with her as some community members are, many doubt meaningful change will come without systemic culture change.

Over the last 20 years Harrison has been the subject of innumerable lawsuits, investigations and a literal razing. Despite it all, things have not gotten better at the north side high school. Nor could they get much worse.

A contract spells out the terms on which a student may leave the program for a regular high school. Virtually none is able to comply. Instead some leave for schools outside the district; others end up on the streets or in the criminal justice system.

Virtually all of its 66 students are impoverished and 93 percent are African-American. Though many have underlying unaddressed learning disabilities or mental health issues, the focus is most often on meting out discipline.

Until recently classrooms were locked at all times. Students emptied their pockets on arriving and could not take books or other material home, according to a federal civil rights complaint filed last week.

Harrison is Minneapolis’ only program for high school students in a special education Level IV setting, a designation that means the student will be served away from the general education population. Families that do not want their children to go to the school have virtually no choice.

“This is not a school, this is a mini-prison,” says Nekima Levy-Pounds, a University of St. Thomas law professor who filed the complaint on behalf of a former Harrison student identified as J.G. “This place to me has become the catchall for undesirable high-schoolers. That’s the sense we got, that it’s a warehouse for kids they don’t want elsewhere.”

The attorney who filed a 1997 lawsuit that resulted in an earlier version of Harrison being bulldozed and rebuilt, Amy Goetz concurs. “I never saw a kid who went back to a less restricted setting, she says. “I never saw one graduate. I saw them drop out, go to jail or commit suicide.”

Levy-Pounds is one who doubts the district has the capacity to change the systemic issues that feed mostly black children into Harrison. The complaint her students helped to draft asks the U.S. Department of Justice’s Civil Rights Division to investigate and possibly even close the program.

At the same time, two MPS board members have vowed to track the changes at the school — part of a revamping of the district’s special education programming overall — closely going forward.

So will it be different this time?

“When something this pathological occurs and is part of a system that is that entrenched there is a natural resistance to change,” says board member Don Samuels. “You come up against very real reasons why things are the way they are.”

Minneapolis and St. Paul schools have been under federal pressure for a couple of years to address racial disparities in discipline. In both districts behavior that is not considered problematic in white children is often described as defiant — or worse — in children of color.

Black boys in particular are at risk of being labeled with the special-education designation Emotional Behavioral Disorder, a process that can begin not with an intellectual or cognitive disability but with virtually any kind of inappropriate behavior. Because the root causes of the behavior frequently go unaddressed, this designation often starts them on a path that ends at Harrison or another segregated setting.

The lack of meaningful checks and balances on that path is at the heart of Levy-Pounds’ complaint.

“Teachers and school administrators have unreasonably broad discretion in moving a student’s [special education plan] to Level IV and sending them to Harrison,” the complaint states. “After analyzing the Minneapolis Public School District’s key demographics, it is apparent that the practices of those responsible for sending students to Harrison are having a disparate impact on students of color.”

The federally mandated meetings that accompany changes in a student’s special-ed placement are meaningless when someone has decided to send a student to Harrison, the complaint continues.

“A student’s guardian exercising his or her due process rights to a hearing for an alternative school placement setting before administrators would simply produce the same result as not exercising their rights, with Harrison as the district’s only Level IV school,” it states. “Without adequate alternatives, students are forced to leave the district or attempt to have their setting decreased.”

After a scathing Star Tribune investigation of the disparities was published last fall, board member Tracine Asberry and others began asking questions about the future of the program. Samuels joined the push after his swearing in in January.

In June, an outside audit of the district’s special education programming found MPS lacks the capacity to effectively provide even basic programming to its special-education students. By the time children with unaddressed learning gaps begin high school, behavior problems have developed as a result.

The Harrison turnaround was one of many changes new Executive Director of Special Education and Health Rochelle Cox called for going into the 2014-2015 school year.

“I looked at that [the audit] as a gift,” Cox says. “Special ed had become a place and not a service.”

Board member Asberry agrees but goes a step further. She would like to see the district begin reporting to the community on all kinds of non-traditional programs during its annual academic progress report. Other examples include a teen parenting program, gifted and talented programming and Title I services delivered to impoverished learners.

“This is an opportunity to address the complexities at MPS,” she says.

When Fabre took over her own alma mater, Rosenwald Elementary, in an impoverished community outside of Baton Rouge, there were bars on the window there, too. She removed them, fired ineffective staff and instituted a “discipline with dignity” policy.

The first thing she did at Harrison was to begin meeting with students and parents. Because the three to five years it may take to make deep changes is too long for students in the program now, in consultation with Cox she began a series of three-week action plans.

The first: The students particularly hated having a police officer stationed adjacent to the front door. It set a bad tone for the day. Fabre moved the officer upstairs. 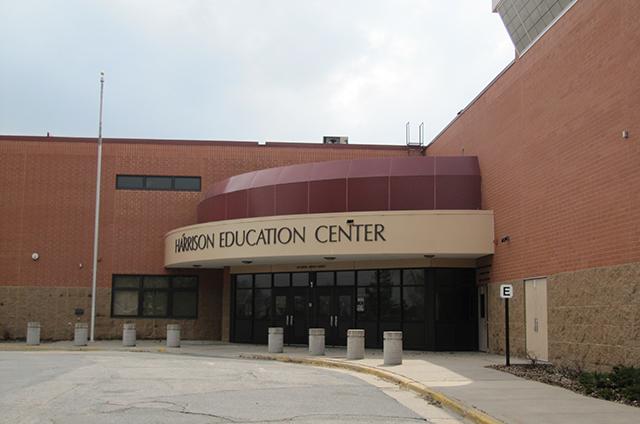 In the second cycle, she worked out the details of unlocking the doors without compromising anyone’s safety. Harrison now has hall monitors and hall passes and systems for thwarting students that attempt to exploit them.

Fabre will restaff from the ground up — or “fresh start” — the school over the summer. Current staff — many of them with far less seniority than teachers at all but a couple of the district’s other schools, and lacking the best licensure — may reapply. Harrison’s new staff will have support, say Cox and Chief Academic Officer Susanne Griffin. Training will come to the school, and the aides who are crucial to the program’s functioning will be included.

Fabre also wants to create opportunities for students to see a positive future beyond the program. She has been working on goal-setting with individual students and wants to define, for Harrison, what college- and career-ready means and the steps to get there.

“We’re going to bring in some courses that supply hands-on learning,” she says. “Students can see, ‘I can make a living.’

“We recognize that we have some really amazing students and we have not provided them an opportunity to demonstrate their brilliance.”

Indeed Cox and Griffin have perhaps the bigger job trying to change MPS’ culture. Regular high schools must be prepared to welcome students back from Harrison and to support them in staying.

Efforts to stop the practice of excluding students with difficult behavior from regular classrooms has been a huge flash point in St. Paul Public Schools over the last two years. District leaders there were slow to recognize that they had not provided teachers with tools to manage students who can disrupt the entire classroom.

“There’s got to be a commitment to quality on the part of people who understand what positive behavior assessment and intervention are,” says Goetz. “What can’t be lost in this discussion is most of these kids have developed behaviors around academic and language struggles that have never been dealt with.”

Two weeks ago Superintendent Michael Goar invited Levy-Pounds and Chris Stewart, a former MPS board member and cofounder with Levy-Pounds of the Black Advocates for Education, which endorsed the federal complaint.

According to Levy-Pounds, Goar asked the two to throw their support behind the district’s efforts to drive change. Neither has ruled that out, but for the moment both say their highest role is that of outside watchdog.

“I told Michael Goar I would only come to the table if staff were receptive to outside voices that will push for accountability,” says Levy-Pounds. “Talking to parents doesn’t address underlying institutionalized racism.”

For his part, Stewart cautions that MPS has a long history of pinning its hopes on a charismatic or exemplary leader. Fabre may be the real thing, he says, but she can only go so far without systems change. Both say the district lacks the technical capacity to make those deeper changes.

For the moment, Asberry and Samuels appear to be the individuals who can hold down a tenuous middle. Both say they are committed both to cheering on Fabre and her supporters in the administration and to keeping the heat on the district to make hard decisions.

“I’m proud that the district has been proactive enough to get the new principal in,” says Samuels. “I intend to throw all of my weight in support of her. … Piece by piece, we can dismantle the less transformational, less humane aspects of the system.”