News
Learning Curve
MinnPost’s education reporting is made possible by a grant from the Bush Foundation.
June 30, 2015

Of all the graduation parties staged in recent weeks, perhaps none was as sweet as the small reunion held last week at Minneapolis’ Cristo Rey Jesuit High School for the benefit of a reporter.

Four young men and women came back to the school where, in 2011, they were members of its first-ever graduating class — the topic of a story that ran in this space — to talk about what went into making them the first Cristo Rey alums to graduate from college.

Part of a national group of Jesuit schools of the same name, Cristo Rey had vowed to get 70 percent of its 61-member high-poverty inaugural graduating class to — and through — college within six years.

The 8-year-old school missed that mark, at least in the first four years since graduating its first class, but far outpaced the overall U.S. college graduation rate of 40 percent for all students. Nearly 60 percent of Cristo Rey grads earned degrees in four years, vs. just 10 percent of low-income students.

By this spring 21 members of Cristo Rey’s class of 2011 had earned a two- or four-year degree and 15 are continuing. Faculty members remain in touch with the rest, who are working, who were teen parents or who have family issues.

The four degree holders who gathered at the school last week to tell their stories couldn’t get enough of one other, filling in each other’s stories and reminiscing about the late-night long-distance texts and Skype sessions where they shored up one another’s courage when times got tough.

Their advice: Find a college that offers supports

Between them the four have diplomas from four private liberal arts institutions recognizing eight majors, four courses of study abroad, two grad-school acceptances and one common piece of advice for others hoping to follow in their shoes: Find a college that provides support — financial and otherwise — for first-generation college-goers and lean on it. 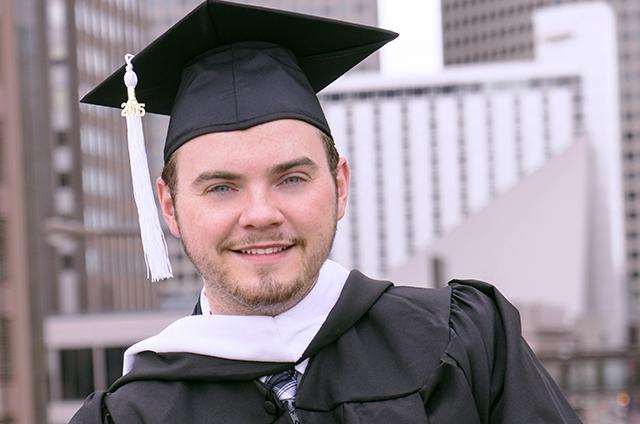 Courtesy of Cristo Rey
Jeffrey Weinhagen was awarded a degree in Hispanic studies and political science from the College of St. Benedict and St. John’s University.

Jeffrey Weinhagen was awarded a degree in Hispanic studies and political science from the College of St. Benedict and St. John’s University. He’s going to pay down his loans a little before going on to law school.

Why St. John’s? As Weinhagen was graduating, the university was launching a scholarship fund for first-generation college-goers as well as intensive personal support. He had a life coach, a financial coach, an academic coach and a career coach. He met with them once a month, met their families even.

Weinhagen needed the career coach less than the other supports because, like all Cristo Rey grads, he worked his way through high school in professional settings. In his case that meant Wells Fargo’s public finance wing and the University of Minnesota’s Academic Health Center.

Weinhagen ended up at the private school, located just north of Lake Street a few blocks east of Interstate 35W, after his parents’ drug addiction came to the attention of the adults at the Boys and Girls Club where he hung out.

The program participants who enrolled Weinhagen in Cristo Rey and subsequently became his guardians had both been to college.

“I knew it was going to work the whole time, but it was hard,” says Weinhagen, who is white. “I came from Cristo Rey, which is very diverse. I didn’t expect [Collegeville] to be so not diverse. It sounds weird, but it was hard to find my place.”

His place turned out to be among other first-time college-goers drawn by the school’s supports.

From Augsburg to USC 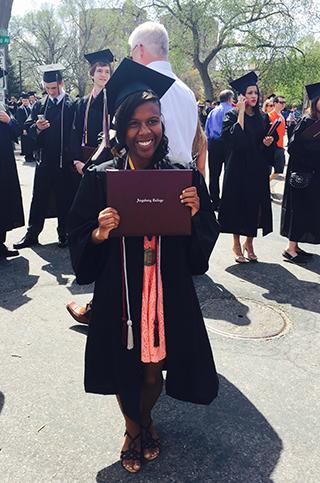 In a few weeks Simone Fuller, who triple-majored at Augsburg College, leaves for a graduate program in social work clinical practice at the University of Southern California. She hopes to use the credential to do research in Central America.

As a senior at Cristo Rey, Fuller had no plan to attempt college at all. Like Weinhagen, she was estranged from her parents. When she started at the school in 10th grade she and her alcoholic mother were homeless and Fuller had dropped out of Minneapolis’ South High.

Fuller’s grandmother found Cristo Rey and, not letting on that she wasn’t actually the girl’s guardian, enrolled her. In 12th grade the school’s president pushed Fuller to apply to somewhere, anywhere. She spent a year at St. Mary’s University in Winona, which has a generous first-generation scholarship program and intensive supports.

Still, it wasn’t enough for Fuller, who was one of two African-American students in her dorm. After a year she transferred to Augsburg. Cristo Rey’s social worker had graduated from the program and raved about it.

Augsburg has a very diverse student body, but Fuller continued to lean on her high school for support. Learning from the experiences of the other schools in its network, Cristo Rey employs a staff member whose full-time job is to stay in contact with graduates who are in college. 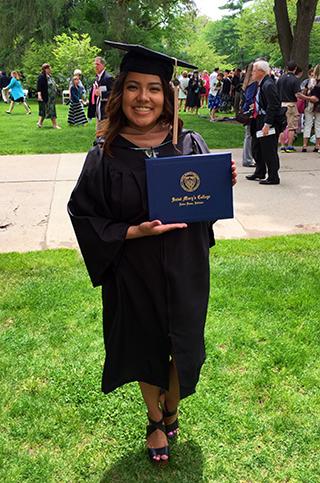 That support ranges from helping students reapply for financial aid when necessary to transportation to tutoring and, in the case of two brothers whose parents were deported while they were in high school and college, respectively, the drafting of wholesale life plans.

School staff also work to support parents, who often have little concept of the ultimate payoff of supporting a college-bound child who could otherwise be contributing to the household budget. Latino families can be particularly reluctant to let daughters go far away.

Cristo Rey staff took Catherine Alcantara, whose parents came here from Mexico, and another student to visit St. Mary’s University in Notre Dame, Indiana, after the girls were accepted.

“I remember I got the acceptance letter and I read it out loud over dinner,” Alcantara says. “My mom just gave me that look, like ‘Really? You’re going to Indiana?’ And I said, ‘Yeah, it’s an all-girl school. And my dad just smiled.”

Overwhelmed initially, Alcantara and the other two students of color at the school banded together. Their classmates were surprised when they advanced opinions, apparently expecting they would be shy and deferential.

When Alcantara couldn’t afford to go home on break, which was depressingly often, she went home to Chicago with one of them. They had the support of counselors who worked only with first-generation college-goers, and lots of scholarship money.

Once they bought in, Alcantara’s parents bought all the way in, telling her not to worry about the household budget. (They did call to ask for help navigating the school’s online bill-paying system.)

“My dad said, ‘You know what, once you are out of the house it’s all school, you don’t have to worry,’ ” she says. “He said work as many hours of work study as don’t conflict with your schedule.”

Alcantara graduated from the accounting program. She’s working this summer for her Cristo Rey employer, the brokerage firm Dougherty & Co., waiting to finish the credit hours she needs for her CPA credential in graduate school.

In high school Nancy Leon worked in the admissions office at the Minnesota St. Mary’s, reading applicants’ personal statements. After she decided to apply to the school she knew it would help to discuss her Mexican parents’ small business and the work ethic it instilled in her.

In addition to financing and mentorship, St. Mary’s offers study halls and housing for first-generation students. That appealed to Leon — as did the ability to call for a ride back to Minneapolis for the weekend if she was homesick.

When Leon showed up as a college freshman, her old boss cheered. “She told me, ‘We’re so happy to see you here. Your statement really set you apart.’” 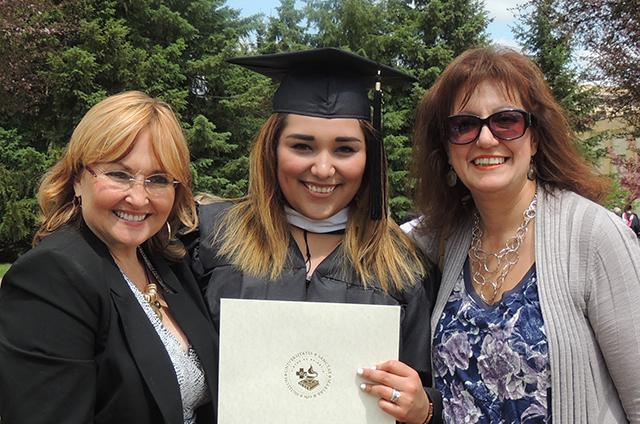 Courtesy of Cristo Rey
Nancy Leon plans to move to Spain and find a job.

Leon’s pragmatic parents questioned her post-graduation plan to move to Spain and find a job — but only because unemployment is high there right now. “They said, ‘Have you thought this through?’ ” For now, she’s looking for a job here instead.

‘We are intentional about pushing them’

Since its launch in Chicago in 2001, the Cristo Rey network has put a great deal of effort into identifying colleges where first-generation students get enough support. And school leaders work to give students experiences that will help them navigate new experiences.

“We are intentional about pushing them,” says Annemarie Hansen, the school’s director of marketing and communications. “Their senior year we try to hook them up with the CEOs of the companies where they had their jobs.”

Cristo Rey faculty stay in touch, but they also encourage the students to lean on each other. Which Weinhagen, Fuller, Alcantara and Leon did, albeit at a distance, reminding each other of how much they had already accomplished.

“We tell them they aren’t alumni until they graduate from college,” says Hansen. “We are here as a resource much after they graduate because that’s what family does and family is what we are.”