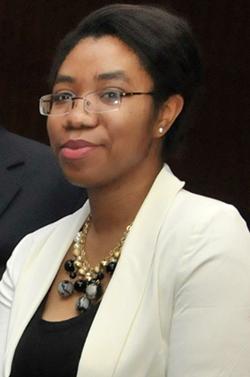 Aaliyah Hodge started school in New York City, where geography is pretty much destiny. Her family lived in a struggling neighborhood, so she went to a failing school. Kids were expected to do poorly, and did.

For a student who couldn’t pick up and move, the only path to one of the city’s selective and successful high schools was to test in. So several times a year Hodge’s mother would wake her at 5 a.m. to take one train and then another, followed by a trip through a tunnel, to a facility where, lack of breakfast notwithstanding, she would sharpen her No. 2 pencil and move up a notch.

The cycle was interrupted by the family’s move to Minnesota, where Hodge channeled that early determination into becoming an academic star in St. Louis Park schools. By the time she graduated from high school, she had accumulated two years of college credit.

Her third year at the University of Minnesota was her first as a master’s candidate. She found her way to the program through Joe Nathan, who operates the Center for School Change in St. Paul, which works both in the charter sector and on strengthening programs that allow students to earn college credits while still in high school.

A year from now, at the ripe old age of 21, Hodge will become one of the first three people in the country to obtain a graduate degree specifically designed to prepare her to work in charter school accountability.

A role in a brand new arena

Yep, that’s right. Hodge is headed not for law school or Teach for America or some other swashbuckling social-justice concern but for a role in a more or less brand new arena of administrative oversight. Someone, she says, needs to stomp out the low expectations that greeted her in kindergarten.

Hodge is one of three fellows in a program recently launched by the U of M’s Humphrey School of Public Affairs for students pursuing a master’s in public policy. Established in conjunction with the Chicago-based National Association of Charter School Authorizers (NACSA), the program is the first of its kind anywhere.

If it is successful, and if other states follow Minnesota’s lead and begin requiring the groups that issue the independent schools’ charters to be accountable for their performance, the program could be copied by other universities, says NACSA President and CEO Greg Richmond.

Until now, no prep programs

“In this country we have all kinds of university programs to train people in areas that are highly specialized, such as being a principal or superintendent,” he says. “Until now there were none that prepared people to work in this new, more autonomous, less regulated, less centralized realm of public chartering.”

That’s the first of the whys: That as pressure mounts for more lackluster charters to begin producing the outcomes of the sector’s standouts, it’s increasingly important to not just shuffle a traditional school administrator into an oversight position.

By way of example, Richmond cites Los Angeles Unified School District, which has an entire staff that oversees numerous charters. “They’ve only been able to look down the hall and say, ‘Is there anyone in the Title I office who can do this work?” he says. “It’s not like when you go to hire a lawyer and there are law schools.

“There is a very strong demand around the country from charter authorizing officials for good people. There is no question that these first three individuals and those that come after them are going to have multiple job opportunities.”

Home to the nation’s first charter schools, Minnesota several years ago passed an unprecedented law holding the organizations that issue charters responsible for schools’ performance. Numerous authorizers got out of the business, while those that stayed increasingly articulated expectations for schools.

Role of the authorizer

The authorizer’s job is totally different from that of, say, a state regulator. Schools must report to the authorizer on their fiscal health, for example, but they also need to demonstrate progress on the standards set when they were given the green light to begin recruiting students.

At the same time, legislation that would require authorizers to close schools that don’t get good outcomes is gaining traction here and elsewhere.

When NACSA began looking for a university to host the fellows, Richmond was convinced a public-policy program would be a better fit than a traditional school of education.

As it happens, Richmond is a Humphrey alum. His experience told him that a graduate school of public policy would attract students who are entrepreneurial yet want to end up in the public sector.

And the approach made sense to Laura Bloomberg, the associate dean at Humphrey who will oversee the fellows’ studies. “I don’t think a lot of people come to Humphrey thinking, ‘I want to be an authorizer,’ ” she explains. “They do come thinking, ‘I want to do better policy,’ whether that’s education policy or transportation policy or climate policy.”

And there is the fact that the program is located in a state where, because of the new accountability laws, authorizers have developed the capacity to work with schools to better outcomes.

“The idea that they can be run by the people in the school is the piece that has the power to change kids’ lives,” says Richmond. “The authorizer is the entity that on a daily basis decides how much freedom or regulation that school is going to experience.”

As the kick-off to her fellowship, Hodge is spending the summer working with Audubon Center of the Northwoods’ authorizing department. So far the experience stands in sharp contrast to the years her mother spent trying to get her into a classroom where she could soar.

“A lot of times the people who these policies affect are not in the room when the laws are made,” says Hodge. “I’m one of those students charter schools were set up to reach.”