News
Learning Curve
MinnPost's education reporting is made possible by a grant from the Bush Foundation.
July 16, 2015

Almost exactly four years ago a teacher sat down with a reporter at a Caribou Coffee in one of Anoka County’s islands of concrete. It was hot, and Jefferson Fietek was exceptionally matter of fact as he described the prior school year.

He had buried three middle schoolers who took their own lives, coped with the hospitalization of another seven of his students who’d attempted suicide and operated, essentially, an ad hoc crisis prevention hotline out of his home.

All told, eight Anoka-Hennepin School District students died after being bullied because of perceived sexual orientation or gender identity issues. At the time, Fietek was one of a relatively small circle working to change the situation, which had yet to generate headlines. He was out on a skinny limb indeed talking to a reporter.

As he narrated the tragedies I imagined a gay boy who’d been there and who — grown up and faced with kids who might not make it to the safe harbor of adulthood — managed to get up and face each new day thanks largely to titanium skin.

It was with utter astonishment that I listened the other day while Fietek — this time on video on a screening copy of the brand-new documentary, “Same Difference” —explained that one of the kids being harassed was his own teenaged son, an abuse survivor Fietek adopted.

That son called while Fietek and I were talking — wondering about dinner, the teacher said as he put his phone back in his pocket. We made a little small talk about parenting teenagers before resuming the interview. I had no idea he might have picked up the call because he was sick with worry.

Screening twice tomorrow night — that’s Friday, July 17 — “Same Difference” chronicles the 2010-2011 epidemic of student suicides in Anoka-Hennepin. While you are there, find Fietek, one of the film’s protagonists, and give him a big hug. 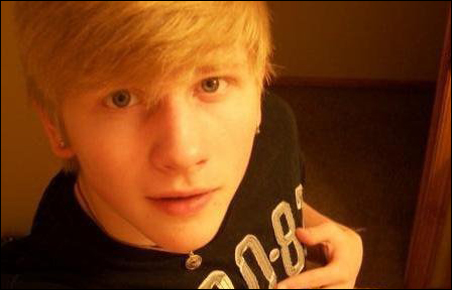 Hand him a big check, too, for Justin’s Gift, the small nonprofit started in honor of one of the late students, Justin Aaberg, who died five years ago at the age of 15. Via the efforts of Fietek and others, the fledgling organization has worked to create dances, Pride festivals and other safe spaces for LGBT teens, students of nonconforming genders and other young people who are concerned about school climate.

“Same Difference” contrasts Aaberg’s and Fietek’s experiences with those of a boy coming out in a school in Ann Arbor, Michigan, that embraced him wholeheartedly. Their markedly different experiences makes the intended point, but it’s not what Twin Cities viewers will value about the film.

I spent months talking to teens, parents, teachers and administrators in the district during the crisis, yet I had heard a fraction of the detail narrated in the film. Which is, I think, telling. 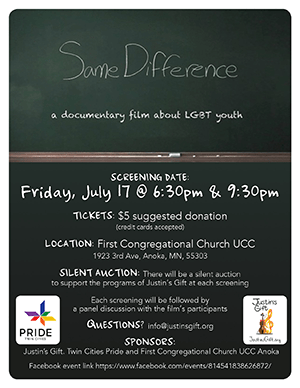 At the time, the district administration was simultaneously excusing itself from investigating and insisting none of the suicide victims was bullied. So we didn’t know Aaberg was stabbed in the groin with pencils and cornered repeatedly in a notoriously isolated passageway at school. We didn’t know his phone vibrated long into the wee hours the night he hung himself.

The Anoka-Hennepin district is still plagued by official ambivalence about enforcing not just its own anti-bullying policies — adopted with the world quite literally looking on. And some schools have become affirming much more quickly than others.

But what a difference five years and a landmark federal civil rights suit make, huh? Just the fact that a documentarian would make a film like “Same Difference” and that it would screen at film festivals sends a message to Anoka County’s young people: People are watching, and they believe you.

“Same Difference” screens at 6:30 and 9:30 p.m. Friday, July 17, at First Congregational UCC of Anoka, 1923 Third Ave. S., Anoka. A $5 donation is suggested. Credit cards will be accepted for admission and a silent auction to benefit Justin’s Gift. The screening is co-sponsored by Twin Cities Pride.