News
Learning Curve
MinnPost's education reporting is made possible by a grant from the Bush Foundation.
Aug. 31, 2015 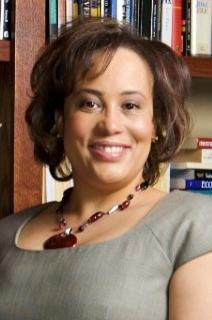 Two Fridays ago, Macalester College Professor Duchess Harris appeared on TPT’s “Almanac” to talk about a book she co-authored about the Black Lives Matter movement. Aimed at middle- and high-school students, the book won’t be published for another couple of months.

Her publicist sent out a link to the segment anyway, which got picked up by the ultra-conservative Daily Caller, which posted a story under the headline, “Fancypants Professor Introduces Black Lives Matter Book For White SIXTH GRADERS.”

That tumbled into a “Fox and Friends Weekend” segment in which Larry Elder, the “Sage of South Central,” said the book was “indoctrinating young kids, teaching them that black people are victims and, by the way, you, as white people, ought to feel really, really guilty about it. Never mind the election, and re-election, of a black president.”

The site Twitchy — which deserves some sort of award for unintentional irony in branding — piled on, noting that the book is “Common Core aligned.”

That none of them had seen the book, which has not yet even been bound into galleys for reviewers, stopped no one. Tweets multiplied into paranoid, profane and predictable Storifys.

By Monday it was over and Harris returned to being chair of the American Studies Department at Macalester, as well as the author of much weightier tomes. (Side note to Fox & Co.: It doesn’t work to use the phrase “black feminist” to insult a woman who calls herself a black feminist and even writes whole books about black feminism.)

The episode might have served as fodder for hilarious water cooler talk if it did not so neatly illustrate the impetus for the book.

“Black Lives Matter,” a slender volume about the movement, is exactly the kind of reading material that, acquired by enough U.S. school libraries, could finally relegate Elder and his fellow sadsack bloviators to history’s dustbins.

Harris has long written about race, but hadn’t previously thought to do so for young people. This time last year, when she convened her Introduction to African American Studies course, she knew the class needed to talk about Michael Brown, killed just three weeks earlier in Ferguson, Missouri. 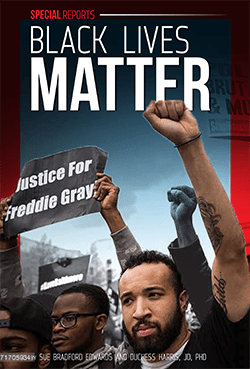 When she broached the topic, the wave of discomfort was palpable. A quick exchange revealed that not a single one of the students — a disproportionate number of them freshmen — had talked about race in high school. They had signed up for the class, but they were scared.

“The outcome of being afraid is illiteracy,” says Harris. “I laugh with my math colleagues; they don’t have students who show up without having taken algebra.”

The class was wrapping when local educational publisher ABDO asked Harris to analyze the content of a book it had commissioned. Harris loved what journalist Sue Bradford Edwards, who was covering Ferguson, had written so much she asked if she could have a larger role in the project.

Advance sales for the book the two co-authored start on Amazon Nov. 1. Unlike Elder, MinnPost asked for and was given a copy, complete with an introduction by Rep. Keith Ellison.

The book is remarkable, tracing the roots of the movement as far back as the 1700s in prose that is clear and frank. It’s written for secondary students, but contains history that would be illuminating to most American news consumers, whose headlines are rarely followed by the context Harris and Bradford Edwards provide.

Chapters document the killings of Oscar Grant, shot by police at the Fruitvale BART station in Oakland, Trayvon Martin and Detroiter Renisha McBride, among others. There are chapters on racial disparities in policing, the roots of police force militarization and the U.S. Justice Department’s response to the protests in Ferguson.

Indeed there’s something about revisiting these events without the clutter and chatter of the 24-hour news cycle that gives the book tremendous power. Without the background noise, the facts of each killing and law enforcement’s abuses are rendered stark.

A lawyer as well as a doctor of philosophy, Harris says the book’s fact-upon-fact voice is intentional. The way law students are taught to dissect cases is a very effective way to help teens navigate controversies.

“What did Trayvon Martin’s side say? What did George Zimmerman say? What did the jury decide?” she says. “That’s what I mean about literacy. It’s not about taking a side, it’s about people having a coherent understanding.”

It’s important to note that “Black Lives Matter” is not a textbook. It is part of a series of books published by ABDO to provide background on current and historical events. Harris and her collaborator are at work on another, about African-American female mathematicians who worked at NASA.

Providing a weekend’s grist to the rage machine was most assuredly not one of Harris’ goals when she asked to join Bradford Edwards. It would be great if future freshmen arrived at Macalester with exposure to conversations about race.

“My hope is [the book] is used in classrooms 6 to 12, and that it sparks discussion and dialogue,” she says. “I would love it so much if this were officially adopted as curriculum in the Twin Cities. That’s my dream.”