News
Learning Curve
MinnPost's education reporting is made possible by a grant from the Bush Foundation.
Aug. 21, 2015

A few years back Dr. Irving Shapiro asked his good friend Peter Heegaard to go for a walk. Heegaard is an author and retired investment banker with a toe in pretty much every civic initiative a person could name. The founder of the Phillips Eye Institute, Shapiro wanted to show him the affordable housing built with the help of the hospital’s charitable arm.

While they walked, Shapiro picked Heegaard’s brain. With the housing project done, the institute’s foundation was considering new initiatives. Heegaard pointed out that Minneapolis Public Schools (MPS) could no longer afford to screen kids’ vision, something he knew from his work with the district’s nonprofit partner, AchieveMpls.

“It was kind of a flip comment,” Heegaard chuckles. “Almost a joke — like, You’re the eye institute.”

Two years later, Heegaard got a call from Shapiro, who revealed that he had acted on Heegaard’s remark. The Phillips Eye Institute Foundation had tested 2,000 kids and found one in four had vision problems significant enough to interfere with school or daily life. In the process, they had also realized that even when screening uncovered a problem, many families lacked the resources to deal with it.

Researchers know that low-income and minority children disproportionately suffer visual impairments, possibly because they are more likely to be born prematurely and at low birth weight. Children with health issues, impoverished children and kids of color are two to three times more likely than white peers to have undiagnosed or undertreated vision issues.

Research has also documented the correlation between visual deficits and a failure to acquire the early literacy skills that quickly compound as students move from learning to read to reading to learn. Unusually high numbers of juvenile delinquents have vision issues.

“A likely outcome for children demoralized by ongoing struggle coupled with lack of academic success is disengagement from school,” one study reported. “A child with an undetected or untreated vision problem is more likely to develop social or emotional problems.”

Heegaard didn’t need to read the studies to grasp the potential fallout. His own first few years in school, he assumed he wasn’t as smart as his classmates. He came from a family of means, yet no one questioned whether his vision played a role in his lackluster academic performance until a school transfer in the third grade raised alarm bells.

“If you are a kid who can’t see, you don’t know you can’t see,” says Heegaard. “What you do know is that every other hand in the class goes up and yours doesn’t.”

Taking Phillips’ expertise into the community

The other two initiatives the foundation hopes to fully fund going forward involve transportation and technology. By definition, transportation is an issue at an eye hospital, where vision-impaired patients are often dependent on elderly spouses who may not be in any better shape to drive.

In terms of technology, few Twin Cities residents realize what a vanguard institution the institute is. It began as the eye surgery wing of Mt. Sinai Hospital, which opened in 1951 in part so Jewish doctors would have a place to practice.

In 1987, four years before Mt. Sinai closed, the Phillips Eye Institute began operating in its own building on the same campus. One of just a handful of eye hospitals in the United States, the institute performs more retinal surgeries than any facility the country.

Taking its expertise into the community to screen children has required some big shifts. Take the old-fashioned eye chart. It’s not a useful screening tool if a patient does not speak English or doesn’t know the alphabet. To bridge that gap, the foundation developed a hand-held screening device that looks like a space-age Viewmaster.

And it’s not helpful to screen a student without following up with their family, which might not realize a problem was found, have a way to get to or pay for a doctor visit, or communicate with the physician in their native tongue. A taxi and a translator used to be the fix.

In conjunction with last year’s All Star Game, the Pohlad family selected the foundation as one of the recipients of a “legacy” gift. The institute already had a center named after Kirby Puckett, who was forced to retire from the Twins by a retinal occlusion. The Kirby Puckett Eyemobile was a natural extension.

An RV that’s larger than a city bus, the vehicle houses a full-service eye clinic. Kids climb on, and if there is an issue that needs correcting it’s taken care of on the spot, according to Executive Director Beverly Fritz. The eye mobile visits 100 schools a year. 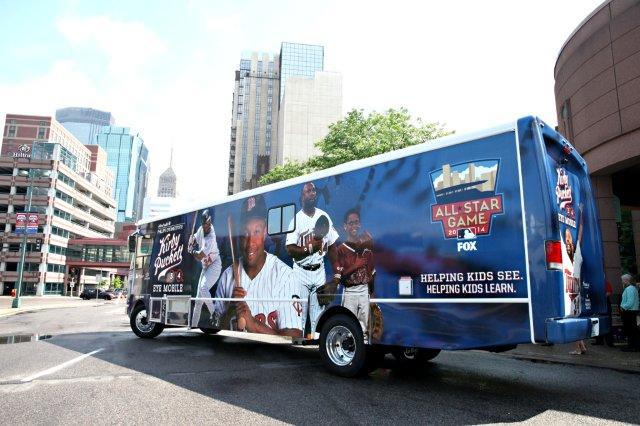 Courtesy of Allina
An RV that’s larger than a city bus, the vehicle houses a full-service eye clinic.

They can pick out glasses without their parents needing to miss work. If a family has insurance, it will be billed. If they don’t, the foundation picks up the cost. Ogi Eyewear donates the frames and Walman Optical the lenses.

Because different vision issues arise at different stages of growth, children are screened in kindergarten and first, third, fifth and sixth grades. Some conditions, such as lazy eye, need to be treated as early as possible while astigmatisms are not identifiable until later.

In the second of its three years, Heegaard’s capital campaign is $500,000 short of its $4 million goal. (The technology and transportation initiatives will need another $6 million.) If donors are willing to fund the effort after that goal is met, the eye mobile can begin visiting the estimated 10,000 students in charter schools in Minneapolis and St. Paul.

National research has found that students may see sharp jumps in academic outcomes; 20-point hikes in proficiency are not uncommon. With no shortage of anecdotal evidence the needle is moving — stories of children who no longer required special ed, for example — the foundation has begun collecting data to quantify its impact.

Here again, Heegaard needs no evidence to communicate the problem or the simplicity of the solution. It takes him a nanosecond to summon the moment he realized his “stupidity” was blurry eyesight.

“I know for sure it affected my self-confidence, which is absolutely crucial,” he says. “You see these pictures of kids after they get the correction and their faces absolutely light up.”

Vision quest: a simple initiative by the Phillips Institute is making a big difference for public school kids